Femen: Are these naked breasts Islamophobic? 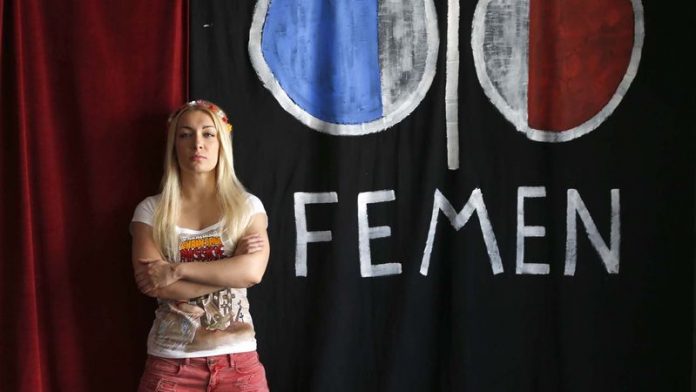 "I'm not an Islamophobe but a religiophobe," tweets Inna Shevchenko, leader of Femen France. After all, she attacks the Christian religion as well – naked from the waist up.

Such accusations, argued some Femen supporters, are aimed merely at deflecting secular critique of the religion. "Only fools think criticism of Islam = 'Islamophobia'," tweeted Richard Dawkins, a prominent critic of Islam. "But there are enough fools to ensure 'Islamophobia' accusation is effective propaganda."

The heated debates about Femen mirror wider debates to do with the "new atheism" of Dawkins, Sam Harris and the like. Shevchenko, by the way, tweets approvingly to and about Dawkins. Femen France has a close relationship with the French journalist Caroline Fourest, one of the 12 signatories of the "Manifesto against Islamism", which equates the struggle against "Islamism" with that against Nazism – as a battle for civilisation.

With a prominent academic like Dawkins describing Islam as the "greatest force of evil today", what qualifies as acceptable secular critique?

The British-based Runnymede Trust distinguishes between "closed" (Islamophobic) and "open" views of Islam, based on a set of criteria. Briefly, the closed view tends to characterise Islam as: (1) monolithic and static; (2) separate from, not interacting with other ­cultures; ­(3) inferior to Western culture, as ­barbaric, irrational or sexist; ­(4) violent, aggressive, terroristic; and (5) as a manipulative political ideology. They also tend to (6) reject critique of the West out of hand; (7) defend discrimination against Muslims; and (8) view Islamophobia as natural.

University of Bonn researchers used the Runnymede framework and psychometric methods to distinguish empirically between Islamophobia and "open" critique of Islam in the field. The first five Runnymede criteria can be used for a rough analysis of Femen's "Islam critique", based on their public utterances:

One can argue about minor issues here, but it is utterly uncontroversial to call Femen Islamophobic. The fact that some "fools" make propagandistic use of accusations of Islamophobia is moot. This is not "progressive" protest, but reactionary language, sprinkled with various species of inductive fallacy – generalising from the basis of nonrepresentative samples, for one.

Femen's ignorance is brilliantly exposed by Shazia Bashir, a lawyer based in New Zealand, in her detailed treatment of the diversity and complexity of the Islamic world. Femen, in its arrogance, simply does not know what it is talking about.

Particularly striking is its dismissal of Islamic feminists and the agency of women in the Islamic world. This is a narcissistic kind of blindness, one that is probably impossible to cure. One can only oppose it.

Femen has not responded to any questions or requests for interviews.

Conrad Steenkamp is a freelance writer

A call to action to keep SA’s religious rainbow intact

New Zealand officials said at least one body would be returned Sunday night, and that all 50 should be back with their families by Wednesday
Read more
Africa