Tyson to new fighters: Never end up like me 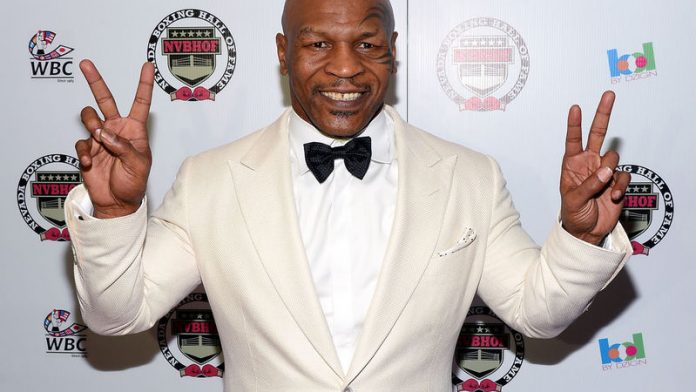 Argenis Mendez of the Dominican Republic and Afghan fighter Arash Usmanee battled to a rare 12-round draw Friday night at the Turning Stone Resort Casino. Mendez (21-2-1) retained his IBF junior lightweight belt in the marquee attraction of Tyson's marketing debut. The embattled Tyson, a member of the Boxing Hall of Fame, has organised an outfit called "Iron Mike Productions," and his aim is to be a full-service agency for up-and-coming fighters, who can learn the sport, in and out of the ring, from one of the greatest.

Usmanee improved to 20-1-1 in the event, which was tabbed "Tyson Is Back," and featured some disappointed fans who felt Mendez won the bout. Iron Mike was one of them.

"I'm very grateful," Tyson said. "We had two sensational championship fights. I thought my fighter (Mendez) won his fight. It was a sensational fight, good for boxing, but horrible for my boxer. He's a great boxer."

But the story of the night was Mendez-Usmanee. Neither was knocked down in the bout, which was nationally televised.

'I'm not a magician'
"I'm really disappointed in the decision," said Mendez, whose nickname is "La Tormenta." "I'm the champion and I thought I won."

"It was a very close fight," Usmanee said. "It depends on how you judge a fight. I was the aggressor. It could have gone either way."

Tyson says he's ecstatic to be back in the sport. He says his fighters -like Mendez – won't be subjected to what he went through in his heyday, and that you can expect more cards like his first.

"When I first got involved, I just didn't know," Tyson said. "Never in a thousand years did I plan on doing it. I'm just happy to be back involved in boxing. It's a dream come true. I'm a little nervous."

Tyson, 47, who has battled addiction and depression, and has lost millions of dollars through the years, hopes to provide his fighters with a structured environment for success, and to be able to help them learn from his mistakes.

"You're never going to hear them say 'Mike Tyson stole from me.' Hopefully, they'll never end up like me," he said. "I'm not a magician. The only thing I can do is suggest – go in the right direction. We have to look for happiness within.

"I can't stop somebody from hurting themself." – Sapa-AP

Mike Tyson: The cat among the pigeons

In the clearing stands a boxer