Amcu is ‘evolving into a real trade union’ 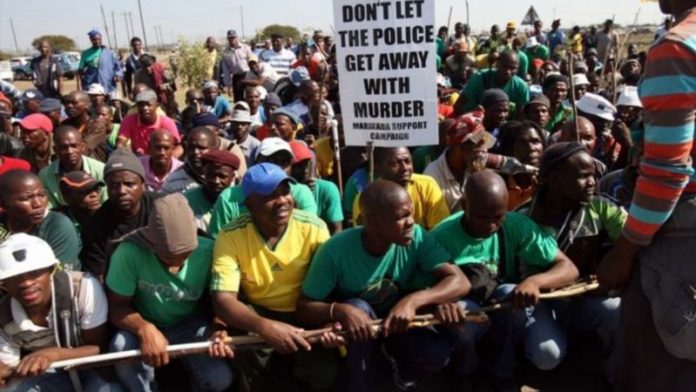 A year ago, militant miners affiliated to upstart union the Association of Mineworkers and Construction Union (Amcu) were marching with spears, clubs and knives in often violent wildcat strikes and protests against management bosses.

But in recent months, leaders of Amcu, an emerging force on the labour stage, have been sitting down to tough but peaceful wage talks with mining executives.

There are even signs that Amcu's turf war last year, which saw it wrest tens of thousands of members from the rival the National Union of Mineworkers (NUM), may have cooled somewhat, with both unions focusing efforts on winning better wages in the gold, coal and platinum mines, rather than fighting each other.

Almost a week after the NUM left the table in wage talks with gold producers, signalling an imminent strike by its members, Amcu remains in the negotiations. It also spent months in talks with platinum producer Lonmin this year to secure a recognition agreement earlier this month.

Lost output
This is a sharp departure from 2012, when Amcu's recruitment drive turned workers into warring illegal strikers, costing billions of dollars in lost output and culminating in the shooting dead of 34 miners by police at Lonmin's Marikana mine.

"Now that Amcu has secured the platinum belt, we are entering a phase where they are evolving into a real trade union," said Crispen Chinguno, a researcher at the sociology department at the University of Witwatersrand and an expert on labour relations in the platinum sector.

"They have union dues coming in, they have recognition, and so they must now play by the rules of the game because they are in the game," said Chinguno.

Amcu also wants to be seen working within the law because it believes the forces of the state are ranged against it.

Its rival the NUM is a key political ally of President Jacob Zuma and the ANC. Senior leaders from the governing alliance, including the head of South Africa's Communist Party, have denounced Amcu as a "vigilante union".

"Amcu is in unfriendly terrain and has to bed down its structures. It cannot afford a three-front fight against [the] NUM, management and the ANC," said political analyst Nic Borain.

It pushed its way into shafts by promising disgruntled NUM workers it could get better deals for them.

Now, with regularly scheduled bi-annual wage talks in the mining sector unfolding, Amcu is in a position of strength, with most of the country's platinum workers flying its green colours. It also represents 17% of South Africa's gold miners.

Amcu is consolidating its gains and both unions must deliver for their members by extracting big pay hikes on their behalf.

Boardroom relief that legal channels are being followed should be tempered however by the size of wage increases sought.

The NUM wants a 60% rise from gold producers including AngloGold Ashanti and Sibanye for entry-level miners. On Saturday, the NUM gave companies, who are offering 6%, a seven-day ultimatum to meet its demands or face strikes.

Living wage
Amcu, whose members in the gold sector could also down tools soon, is sticking to its battle cry of a "living wage" of R12 500 a month, which would mean a more than doubling of pay for tens of thousands of mine workers.

This reflects the uncompromising stance championed by its president Joseph Mathunjwa, a Salvation Army lay preacher who calls on a powerful mix of social justice, African nationalism and evangelical Christianity.

"A living wage is the only way to go. This is not a boardroom mandate. The workers gave us this mandate," Mathunjwa told Reuters.

Companies, including the world's top platinum producer Anglo American Platinum, which suffered a loss last year, said they cannot afford the wage hikes being demanded as their costs soar and metal prices fall.

But South Africa's mostly black mining labour force is in no mood for lectures about income statements as it seeks a bigger share of the spoils from an industry built on low wages and migrant labour during the years of apartheid.

"Nineteen years has been wasted. Show me what has changed for the mine workers since 1994?" Mathunjwa said.

Feared militancy
Amcu officials insist they will deliver for their members within the framework of the law and point to the Lonmin recognition agreement, which opens the way for legal wage talks with the company, as an example of good faith in negotiation.

"It shows we are committed to finding solutions in the mining sector. A strike is not the only way to find solutions," said Amcu General Secretary Jeffrey Mphahlele.

Amcu in fact orchestrated brief strikes at Lonmin earlier this year while pointedly not letting them spin out of control, underscoring a new sense of discipline in its ranks.

The Lonmin deal could even be a sign that corporate charm can help defuse some of Amcu's feared militancy.

Lonmin's new chief executive, Ben Magara, is a Zimbabwean who dealt directly with Amcu, a departure from the aloof approach often taken by executives. Magara even called Mathunjwa "Bra Joe".

But things could still turn frosty during their wage talks and none of this can be expected to completely end violence in the mines. While not on the scale of last year's carnage, machete attacks on mine guards, shantytown riots and tit-for-tat killings between the unions still take place.

When this year's wage settlements are finally done and dusted, the relative lull in the union turf war could end. A new recruitment campaign by either Amcu or the NUM could easily ignite more unrest, not least because union membership is so vital to the culture and identity of South Africa's miners.

"It's a big deal to switch unions. For a South African mineworker, the union is everything. It looks after them, it is their sense of identity, it is their voice," said Chinguno. – Reuters