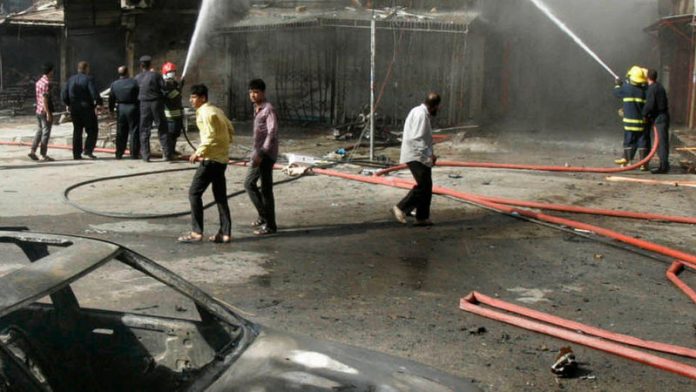 The People's Mujahedeen Organisation of Iran (PMOI), about 100 of whose members are living at Camp Ashraf in Diyala province near the Iranian border, also claimed security forces set fire to the group's property in the camp.

Local hospitals reported two Iraqi soldiers were killed and three were wounded, which officials attributed to angry camp residents attacking an army brigade responsible for the camp. Medics did not, however, report any casualties among Ashraf residents.

The UN did not confirm any of the varying accounts of Sunday's unrest, but the UN refugee agency said "it appears that deadly force has been used and that a number of people have been killed or wounded".

The UNHCR said it "strongly condemns this attack," adding that "the use of violence against a civilian population is unacceptable in any circumstances." The UN's mission to Iraq said it was looking into the unrest, and called on the Iraqi government to investigate the incident.

Earlier this year at least eight people were killed in two mortar attacks on another camp housing the group, which is also known as the Mujahedeen-e-Khalq (MEK).

Cause of violence unclear

Officials and MEK spokespersons gave wildly differing accounts of the unrest on Sunday, and it was not immediately clear what caused the explosions and clashes or the extent of the casualties.

Iraqi police and medical sources said five mortars hit the camp. A police colonel said that in the aftermath of the rockets "some angry Ashraf residents came out and attacked the brigade protecting the camp, killing two soldiers and wounding three in clashes".

A doctor at the main hospital in provincial capital Baquba confirmed the toll. An Iraqi official responsible for overseeing the camp said the blasts were not caused by mortars, but by oil and gas containers exploding inside Ashraf.

"Not a single soldier entered Camp Ashraf," said Haqi al-Sharifi. "There was no attack from outside against the camp, but what seems to have happened is that some barrels of oil and gas inside Ashraf exploded. The police are investigating."

The MEK insisted that the Iraqi army had entered Ashraf and killed 44 of its members in a "massacre" and set fire to property. "Scores of PMOI members were wounded and are in critical conditions and a number have also been taken hostage," Shahriar Kia, a spokesman for the group, said in a statement.

The MEK had previously reported that Iraqi authorities cut off electricity and water supplies to Camp Ashraf about two weeks ago. Former Iraqi dictator Saddam Hussein allowed the rebel MEK to set up the camp during the war with Iran in the 1980s.

Around 3 000 MEK members were moved last year from Ashraf to Camp Liberty, located on a former US military base on the outskirts of Baghdad, but about 100 stayed on at the old camp in order to deal with leftover property and goods.

The UN said it was looking into the incidents, but did not confirm any of the various accounts. "We deeply regret the tragic events of today, which have reportedly led to the killing and injuring of several camp residents," Eliana Nabaa, spokeswoman for the UN's mission in Iraq, told AFP.

"We are closely following up on the developments on the ground and we are conducting our own assessment of the situation."

The MEK was founded in the 1960s to oppose the shah of Iran, and after the 1979 Islamic revolution that ousted him it took up arms against Iran's clerical rulers. It says it has now laid down its arms and is working to overthrow the Islamic regime in Iran by peaceful means.

Britain struck the group off its terror list in June 2008, followed by the European Union in 2009 and the United States in September last year. – AFP