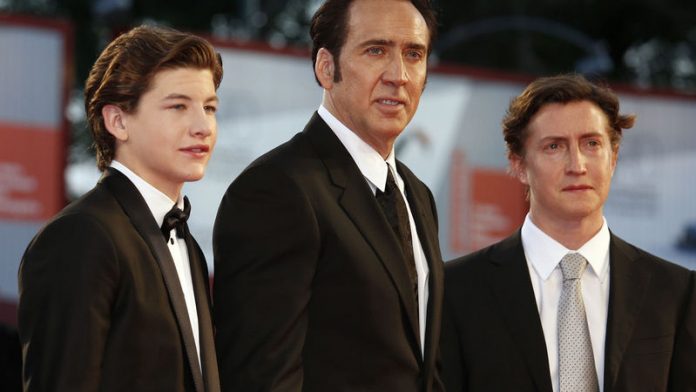 Nicolas Cage reinhabits a low-life version of his Leaving Las Vegas alcoholic in the Southern gothic Joe screened on Friday at the festival while a German film explores the dark issue of wife beating in the latest competition offerings.

On Wednesday, Mexican director Alfonso Cuaron said his big-budget space disaster drama Gravity, the festival opener, had almost been derailed by the crash.

Director Paul Schrader, who wrote Taxi Driver, Raging Bull and other big hits of the 1970s and '80s, said on Friday that economics had pretty much transformed the industry.

"The film business is undergoing a systematic change — not systematic, systemic change. Everything we know in this from the past doesn't apply," Schrader, who made the latest Lindsay Lohan movie Canyons on a low budget, told a news conference.

In Joe, directed by David Gordon Green and based on a novel of the same name by Larry Brown, Cage plays a hot-headed, bourbon-swigging southerner who befriends a young boy who comes from a violent background.

Poverty oozes out of almost every scene, from the battered GMC truck Joe drives to pick up black workers he employs to poison a forest for clearance, to his neighbours in tumbledown shacks who eat wild animals they find by the side of the road.

"I was very careful in the selection of the movie … I hadn't worked for one year and then I found this script," Cage said at a news conference with his co-actors and the director.

"For me it was a chance to return to some very in-depth character analysis, character building and to work with David," said Cage, who won the Oscar for best actor for his portrayal of an alcoholic Hollywood screenwriter drinking himself to death in the 1995 film Leaving Las Vegas.

For that film, Cage said he learned how to portray a drunk by videotaping himself after a few drinks. This time, he said he and co-actor Tye Sheridan, the teenage boy for whom Joe becomes a surrogate father, simulated the feeling by spinning around to make themselves dizzy.

Director Philip Groening, who made the 2005 art-house hit Into Great Silence about Carthusian monks in the Swiss alps, said that while the film was mostly about the emotional and psychological triggers for abuse, economics also played a role.

"The film does not deal with domestic violence only, the film is also dealing with the love between the mother and the daughter," Groening said. "There is also the poverty aspect to the film."

"We tore out all the ceilings so we could light every corner of the house," Groening said after the screening, adding that several aspects of family life are under the microscope.

Much of the dialogue is improvised and the minutiae of everyday life down to the worms in the family's makeshift garden is closely scrutinised, but there are few scenes of violence.

Instead, Christine, who was often seen painting her nails earlier in the film, looks ever more dishevelled as the bruises multiply across her body, and she abandons personal hygiene until Clara's innocently cruel observation, "Mummy, you stink".

The three-hour-long piece is split into 59 chapters, with a silent message to signal the beginning and end of each. These "take up too much time and interrupt an emotional response", trade paper Variety critic Jay Weissberg said in his review.

Groening defends the format, which includes sporadic shots of a solitary old man who may or may not be the policeman's future self.

"This is one reason why maybe some audiences may feel a little distressed at the moment when they feel they have to decide for themselves," he said. – Reuters

If it’s September it must be Venice, but Europe’s film festivals face a new threat