ANC holds on to two wards at Tlokwe 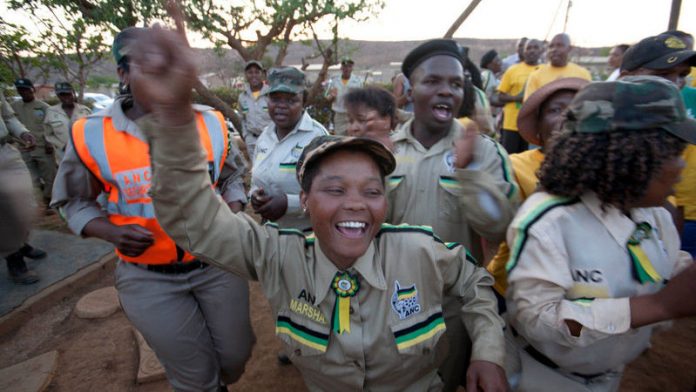 The ANC won two of the three wards contested in by-elections in Tlokwe on Wednesday, according to the Independent Electoral Commission (IEC).

The ANC wished Mahlabe well in his position on Wednesday.

In Ward Six, the ANC's Japhta Monaisa won 882 of the 1 386 valid votes cast. Democratic Alliance (DA) candidate Johann Coetzee came in second with 493 votes. Of the 4 254 people registered to vote in Ward Six, only 1 408 came to the polls. There were 22 spoilt votes.

The ANC faced off with another former party member and provincial chief whip David Kham, who registered as an independent candidate, in Ward 18.

Kham, like Mahlabe, was one of the 14 councillors expelled from the party. ANC candidate Thapelo Skozana won with 884 to Kham's 520 votes. There were 3 251 people registered to vote in Ward 18, but only 1 452 cast their vote and 27 of those were spoilt.

Supporters of Mahlabe began celebrating late last night outside polling stations but were stopped by the police, who had deployed in high numbers to avoid a repetition of the violence that took place last weekend among supporters.

'Very happy'
The ANC also celebrated victories on the other side of town.

ANC North West provincial chairperson Supra Mahumapelo told the Mail & Guardian that the party was pleased with its performance.

"We are very happy and humbled by the support we received from our branches, our neighbours from the Free State, our national officials and national executive committee members," he said.

"We also thank people who gave up their houses to be used as operational centres."

Mahumapelo said the ANC knew some voters wouldn’t vote for the ruling party because they had made that clear during door-to-door campaigns.

"Yes, there are people who said they won’t vote for us. But some of them, it’s because they’re unhappy with the type of councillors we had deployed," Mahumapelo said.

But he insisted that the ANC has "done our work running this municipality effectively. There are heaps and heaps of refuse that have been piling up across the municipality since the DA took over," he said.

The DA has been hoping to increase its majority in the municipality and reduce the ANC to a minority party.

Although the party has only 19 seats, its anti-ANC alliance with other opposition parties adds two seats from the Freedom Front Plus, one from Congress of the People and the extra seat won by Mahlabe yesterday.

This increases the number of DA-led coalition seats to 23, the same number of seats the ANC now occupies.

Smooth process
Voting was generally smooth and quick at polling stations, but the DA and ANC accused each other of conduct not suitable for elections.

DA North West provincial leader Chris Hattingh implied yesterday that the ANC had penetrated the IEC in such a way that the commission was taking sides.

"The North West IEC needs to do an urgent evaluation of its structures, which appear to have been infiltrated by ANC deployees," said Hattingh.

Mahumapelo said:  "Let them [the DA] bring evidence. There’s an electoral court and there are other institutions where they can lodge a complaint."

"Actually the DA is the worst culprit. They used the ANC logo for a pamphlet that was misleading. And they issued that pamphlet again yesterday [Tuesday]."

The DA admitted guilt early this week and apologised to the ANC, but claimed the pamphlet was printed by an "over-enthusiastic" staff member without approval.

The ANC also complained to the IEC that independent candidate Mahlabe had been giving voters pieces of paper with his name on, to urge voters to elect him.

"Fortunately, it was exposed within the voting station and this woman said she was given this paper by Stone. That’s a sign of panic on his part," said Mahumapelo.

"If I’m sure that people will vote for me, there’s no need for me to give them that paper."

"We told our guys not to fight because these people are trying to cloud things so that they can question the legitimacy of results," said Mahumapelo.

The DA claimed that ANC members assaulted its member, a case the ANC said it was happy had been reported to the police.

But the ANC took offence at the DA’s statement that the ruling party used food to buy votes in Tlokwe.

"We can only conclude that these remarks by the DA are the last kicks of a dying horse, since they are now confronting the very real reality that they and their side-kicks are losing these by-elections," said Mthembu.

North West local government provincial minister Manketsi Tlhape said earlier on Wednesday that she was ready to announce a date for the next by-elections in Tlokwe following the postponements of other wards by the Electoral Court in Bloemfontein on Tuesday.

"The next by-elections will be proclaimed as soon as the requisition from the IEC has reached my office so that all the parties involved should begin to prepare for elections as soon as possible," she said.

"The proclamation will include Ward 13 of Tlokwe, where elections were postponed, and Ward Five of Tswaing municipality, where a vacancy was declared following the resignation of a councillor." – Additional reporting by Sapa