Verkykerskop: Where sheep may safely graze 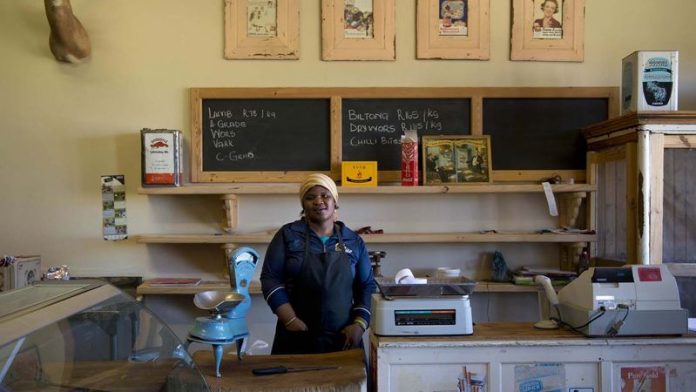 The only time you get a traffic jam in the tiny ­village of Verkykerskop is when cattle or sheep cross its sole tar road – in their own time. With its fewer than 20 residents in town and a few hundred people in the surrounding villages, Verkykerskop feels like it is more or less in the middle of the platteland, though it sits on a hill on the Free State side of the border with KwaZulu-Natal.

Hundreds more people live and work on the farms, which mostly stock cattle and sheep.

Unlike many similar rural areas that are plagued by murders and other violent crimes, this is one of the safest districts in South Africa. There are no murders, attempted murders or robberies.

More coverage
Hillbrow: Where cops do the work for drug lords
Attacks on shops in Duduza 'not random'
Cape Flats: On the border of war and privilege

It is also a paternalistic society, watched over closely by the white farmers and landowners to whom tranquility is inviolable.

Matt Hoffman, one of the owners of the village's hotel and restaurant, says the strong community stops crime. Everyone knows ­everyone. "People here are also less obsessed with bling than in the city, so value more abstract things like peace," says Hoffman, who came to Verkykerskop from Johannesburg nine years ago.

He rarely locks things up and does not worry about crime. Last year, someone left a laptop on top of the rusted old petrol pump standing in the middle of the village. The next day, it was not there, but had been propped up against the local pub's front door.

The farmers who come into town to shop at the co-op, where rows of Land Cruisers are always parked, also do not lock their doors.

"We are lucky here. I can't even remember the last time we had crime," says Johannes Schoeman (36). He was born here, and has recently taken over the family farm. They have never had a cow stolen.

He leaves his home open when he goes on holiday. "Maybe we are too relaxed, because we don't take any precautions," he says. The only proactive thing he does is to keep an eye on outsiders. Because he knows everyone and what they drive, strangers are easy to spot. "If I see a car I don't know, I stop and ask them what they are doing."

This links in to a larger network, where everyone is watching outsiders. Farm workers will report if someone has been loitering, he says.

It is a theme repeated by Phillip and Alinah Masiteng. They work on Voegelvlei farm, where they moved in 1986, and live at the end of a row of homes, each one built by the farmer,  and twice the size of an RDP house.

"People here are good people," says Phillip, after he stands up from watching sport on his television. The only fights are over choice of political parties, church and sports teams. But these never become violent.

"Money is always a problem, but your life is not money," says Phillip. In summer, they sleep with the doors open.

As the red ball of the sun sets over the horizon, a handful of children gather to play outside. They are not Phillip's – his have grown up and are living around the country – but he smiles when he looks at them. "You see, children can play and be safe here. We don't have to worry. In the cities and locations it is different."

Nellie Dlamini lives in one of the more violent townships, Intabazwe, outside Harrismith. Working at the village butchery, she spends her week in safety before going home for the weekend. "In Harrismith, there are tsotsis," she says. "You can't leave the house without a person in it, because they will break in."

Standing behind the counter, she says things are peaceful in Verkykerskop. "There are no problems in the village." Nodding across the road at the large police station, she says: "We have police right there." They are regular customers, as are all the farmers who come to buy biltong, meat and some brandy – the dominant type of drink on the shelves.

She has worked in the village for 26 years.  "I sleep better here and feel better when I go home."

The key to this sense of security seems to be the recurring theme of community. Sitting in the living room of his house, farmer Redge Jelliman points to the sturdy green safe in his neighbouring office. The door is hanging open. "I leave it open because there are no problems here." There are no security bars on the windows, leaving the view out on to his fields unhindered.

"The key here is the good relationship between farmer and worker. They are like my family and I know every person in that family." He grew up with most of his workers and knows their wives and children very well.

By keeping up a constant interaction with his workers, he knows what is happening. When youngsters misbehave, he calls in their mothers in an effort to get them to instil in their children the idea that "crime does not pay".

The only small concern in Verkykerskop is stock theft, which hurts – a grown cow can sell for R10 000 – but is intermittent. When outsiders do wander down the rutted dirt roads, they immediately stand out. "You can tell the outsiders. They dress differently and they don't greet the same way we do here."

According to Jelliman, everyone in the area is there to work and earns a decent salary. "When people do not have jobs, they will turn to crime. Here, everyone is working and earning at least the minimum wage and living in a good house."

Only one farm in the area is unionised and that owner is reputed to be one who does not treat his workers properly. Jelliman believes religion is a strong communal anchor and one that guides morality.

"It helps because pastors tell the people that crime is not a good thing." On his farm, a pastor spent four months living in a caravan next to workers' homes, preaching to the wider community.

"Everyone looks after everyone else and we care about each other. That is why there is no crime," he says. Lifting his dog into the back of his bakkie, he then leaves in a cloud of dust for his next appointment.

Letters to the editor: October 5 to 11