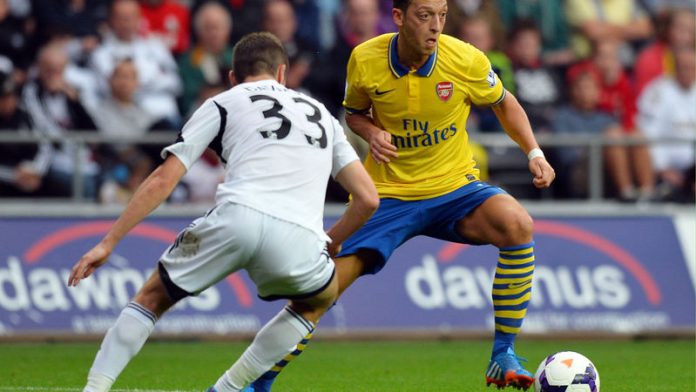 Arsenal inched clear at the top of the Premier League on Saturday after Manchester United sensationally crashed at home to West Bromwich Albion and Manchester City lost at Aston Villa.

A week on from their 4-1 derby humiliation at City, United were looking to return to winning ways in the league but instead slumped to a 2-1 defeat that left the champions in 12th place in the table.

On-loan Marseille winger Morgan Amalfitano put West Brom ahead with an exquisite individual goal in the 54th minute, picking the ball up on halfway and nutmegging Rio Ferdinand before insouciantly dinking the ball over goalkeeper David de Gea.

Wayne Rooney equalised three minutes later, with a free-kick from wide on the left that eluded everyone, only for 20-year-old midfielder Saido Berahino to restore West Brom's lead with a fierce left-foot drive.

Steve Clarke's side held on for a victory that means United have now made their worst start to a season since 1989, in Moyes's first campaign since succeeding the legendary Alex Ferguson as manager.

"It was a poor result and a poor performance," said Moyes.

"We never really got going. We had a lot of the ball in the first half and never made many chances from it. They always looked a threat on the break, in the first half especially, and even more so in the second half.

"We missed that spark and West Brom deserved it, no question. I can't argue with that."

Yaya Toure gave City the lead on the stroke of half-time, with Edin Dzeko putting the visitors back in front in the 56th minute after Karim El Ahmadi had equalised for Villa early in the second period.

However, a fine free-kick from Leandro Bacuna saw Villa equalise in the 73rd minute before Andreas Weimann ran clear and beat Joe Hart two minutes later to give Paul Lambert's side a stunning win.

"We played very well and deserved to win, but in five minutes we threw away everything good we did in the rest of the match," said City manager Manuel Pellegrini, whose side host European champions Bayern Munich in the Champions League on Wednesday.

"The way we lost this game was incredible. We led twice, and we had control of the game."

Arsenal capitalised on their rivals' setbacks by winning 2-1 at Swansea City to move two points clear of second-place Tottenham Hotspur, and eight clear of United.

The in-form Aaron Ramsey was once again their match-winner, teeing up a 58th-minute opener for 18-year-old German winger Serge Gnabry before slamming home four minutes later to claim his eighth goal of the season.

Earlier, Spurs drew 1-1 at home to Chelsea in the first managerial meeting between former colleagues Jose Mourinho and Andre Villas-Boas.

Torres sent off
Spurs manager Villas-Boas saw his side take a first-half lead through Gylfi Sigurdsson, but in a frenetic and keenly contested second half, Chelsea equalised through John Terry before having Fernando Torres sent off.

"The second half was not as good as we wanted. They did well to score from the set-piece," said Villas-Boas, who worked under Mourinho at Porto, Chelsea and Inter Milan.

"The result suits them better than us, but it was a very tight game."

Torres was shown a second yellow card for leading with his arm in an aerial challenge with Jan Vertonghen, but Mourinho felt the decision was unjust.

"The team was very, very strong, until the moment the referee (Mike Dean) made a mistake; a big mistake, but a mistake that has a big influence on the result," Mourinho told Sky Sports.

Record signing Dani Osvaldo scored his first Southampton goal in a 2-0 win at home to Crystal Palace, which catapulted Mauricio Pochettino's side to the heady heights of fourth place.