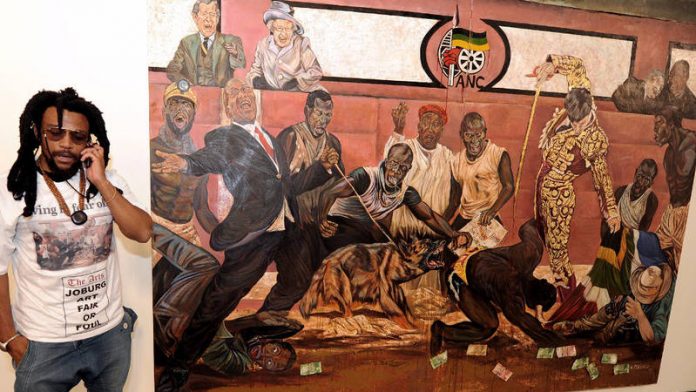 As the furore of the censorship of Ayanda Mabulu's artwork by the Jo'burg Art Fair dies down, the only redeeming factor isn't the latter backing down and restoring the work but that of one artist standing up for another.

At a press conference on Friday Ross Douglas, co-director of the art fair, said: "We felt that showing that work, particularly on opening night, might undo a lot of the work that we have done in building relationships with government."

When photographer David Goldblatt heard that the Joburg Art Fair had taken down the painting he threatened to take down his own work, The Frock and other Pictures. The threat by Goldblatt wasn't one to be ignored. For apart from being a universally acclaimed photographer, Goldblatt was the featured artist at this year's fair.

In a statement, Goldblatt said: "The Johannesburg Art Fair is a commercial enterprise and the management has the right to accept or reject the work that is shown. But once it accepts work and allows it on its walls it is committed, in my opinion, to show it. If it cannot take the heat, it must get out of the kitchen. Art, unless it is servile, is by its nature iconoclastic and challenging of received views. If art fair management invites artists to show their work, they must surely know that there is the possibility that some work will offend some tastes and interests, not least those of the power-elite. If the management is unwilling to cause that offense, then they need to prevent it from occurring before, not after the event."

The organisers of the fair, with their proverbial tail between their legs, had to back down and allow Commune.1 to return the work.

Goldblatt's action is one of many instances when artists have stood up to censors in defence of the brood.

A younger JM Coetzee, familiar with languages such as Afrikaans, English, Dutch and German, applied for a job at the Publications Control Board and Publications Appeal Board.

It's not likely he wanted to ban yet more books but wanted, rather, to give a thumbs-up to many banned tomes such as Magersfontein, O Magersfontein! (1976) , a novel that had the double distinction of being winner of the CNA Award, but also outlawed by censors for blasphemy.

In fact, Coetzee occupies a starring role in South Africa's censorship woes. In 1988, the Weekly Mail – the Mail & Guardian’s forebear – invited Salman Rushdie to South Africa for its literary festival. His novel, The Satanic Verses, had outraged mullahs, resulting in a fatwa against him.  After pressure from the Congress of South African Writers (Cosaw), a charterist assembly of writers headed by Nadine Gordimer, the Weekly Mail was forced to withdraw its invitation.

"Lebanon, Israel, Ireland, South Africa, wherever there is a bleeding sore on the body of the world, the same hard-eyed narrow-minded fanatics are busy, indifferent to life, in love with death. Behind them always come the mullahs, the rabbis, the predikante [ministers], giving their blessings.

"These words are addressed particularly to Cosaw. Don't get involved with such people, don't get into alliances with them. There is nothing more inimical to writing than the spirit of fundamentalism. Fundamentalism abhors the play of signs, the endlessness of writing. Fundamentalism means nothing more or less than going back to an origin and staying there. It stands for one founding book and thereafter no more books."

North of the Limpopo, in Zimbabwe, there was a similar incident in the early 1980s. On the eve of writer Charles Dambudzo Marechera's return after years of exile in Britain, his modernist novel, Black Sunlight, was banned by the censorship board. Black Sunlight, the body argued, imitated the worst aspects of modernism, that it was "clumsy and [made] excessive use of four letter obscenities" and was generally meaningless. Given the book's modernist ancestry, it was ironic that one of the people who appealed the decision was Aaron C Hodza, a rainmaker and an eminent researcher in Shona culture.

In Hodza's submissions carried in Flora Veit-Wild's book Dambudzo Marechera: A source book on his life and work, Hodza quoted ancient Shona praise poetry, some of it ribald. One of the poems, Jakwara, from a maize threshing ceremony, reads: "Thank you, Farting One/ Who Farted in Sky./Going blast!/ In Shabani they heard you/ You made the arse sore/Evil buttock/Lion testes/Slave to the cunt."