The struggle for a cycle friendly city 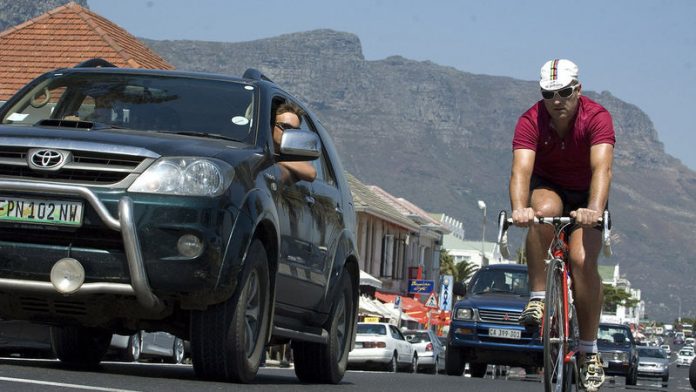 South Africa should be a perfect cycling terrain: The weather is good, the population is largely poor and public transport is appallingly inadequate.

The problem is you’re likely to get killed, and that’s a huge deterrent. South African drivers are notriously bad, and cyclists and motorbike riders are the usual victims.

Theft is another problem and not only of parked bikes. Even when you’re pedalling or off-road on a mountain bike, bike hi-jacking is rife.

Since each journey is a battle against thieves and motorised murderers, it is no wonder there are few efforts to promote cycling as a low-cost and realistic commuting option.

Arrive Alive reports a significant rise in the number of fatal cycling accidents in recent years, mainly because motorists are unaware of them.

Its statistics are sobering. If a collision occurs at more than 45km/hour, there is less than a 50% chance that the cyclist will survive.

Most accidents occur on weekday afternoons and the risk is four to five times higher in darkness than in daylight.

You have to be brave to take to our roads on two wheels, says Arrive Alive’s Johan Jonck.

Yet the rising price of fuel is seeing more drivers turn to cycles, motorbikes and scooters, and these new riders don’t have the experience to help them stay out of accidents, particularly in bad weather when roads are slippery and visibility is poor.

Although there are only 5km of dedicated cycle lanes, many streets are traffic-calmed and have low volumes of traffic.

Juca is developing a map to highlight routes defined by experienced commuters connecting residential areas to common destinations. It also plans to mark those routes with street signs to help cyclists find their way and make other road users more aware of them.

Arrive Alive supports the creation of more cycle lanes, as well as a campaign to legislate a safe passing distance of 1.5m, but that’s not enough, Jonck says.

“Our biggest problem is enforcement. You can tell people to keep to 1.5m when overtaking a cyclist and to stop opportunists and taxis using the cycle lanes, but we need better enforcement to stop the violations that threaten the lives of cyclists.”

Cape Town has introduced cycle lanes in Gugulethu, Khayelitsha and Rondebosch. The Western Cape also issued regulations defining the safe passing distance of cyclists as 1.5 meters, which no other province has done yet.

In September, the Pedal Power Association (PPA) organised a 20-day national “Ride for your Life” tour to promote a safe passing distance of 1.5m. On each leg of the ride, a white “ghost bike” was erected to commemorate cyclists killed on our roads.

PPA is also lobbying for better conditions for cyclists and has met Cape Town officials to discuss bicycle lanes, street signage, the installation of lock-up facilities for bikes and car-free days for the city centre.

“Cycling is an environmentally friendly pastime that keeps social riders fit and healthy, while for many South Africans, it’s an affordable means of transport.”

Yet paperwork rather than actual progress characterises the government’s stance on making cycling safe for commuters or recreational cyclists.

“Plans have been tabled for years with little implementation. In 2003, a 300-page report titled Pedestrian and Bicycle Facility Guidelines was released, providing guidance for road authorities on how to design safe cycling facilities and suggested typical layouts.

Little has changed. The Road Traffic Management Corporation’s executive manager, Ashraf Ismail, says only Cape Town and Johannesburg have advanced cycle-friendly plans, but he can’t vouch for their progress.

“The safety of cyclists leaves much to be desired. Many of our roads were built for vehicles with no consideration for cyclists or pedestrians. We have engaged with road engineering departments to make sure the budget is found because there is a huge opportuity for getting South Africans on a bike.

“The advantages are obvious: not everyone can afford a vehicle and there’s the fitness element, but many people are reluctant because they are terrified.”

The RTMC supports the call for a 1.5m passing distance but the challenge is enforcement, Ishmail says.

Cyclists also flout the regulations and endanger themselves by doing so, he adds.

“We need both drivers and cyclists to understand that the public road is a shared space. We need to live and let live,” he says.

Cycling accounts for 0.2% of commuter trips made in Johannesburg. The city council’s new Integrated Transport Plan for 2013-2018 cites building an infrastructure to support cycling as a way to raise that, by creating cycling lanes and lock-up bike sheds at bus and train stations, and large taxi ranks.

Yet the council is still only “considering” introducing more cycling lanes despite a study by the Council for Scientific and Industrial Research (CSIR) in 2009 that drew up extensive plans for a cycle-friendly city.

It highlighted the areas of greatest need and designed cycle routes linking marginalised areas to the economic centres.

It saw William Nicol Drive as “a unique opportunity to provide an affordable alternative to minibus transport” between Diepsloot and Fourways, with facilities at Fourways mall and at taxi ranks for cyclists to store their bikes and catch a taxi if their commute took them further.

A network of cycle lanes was also designed for Soweto, the city centre, Alexandra and the universities.

Slow progress
Several cycling routes around Johannesburg have been proposed by Critical Mass, an organisation that stages mass cycle events to fuel the culture of cycling and champions cycling as an alternative to motorised transport.

Bikes are not allowed on buses or trains, which makes commuting difficult, he says.

Logically, people must be able to pedal to the train or bus, load their bike on with them, and then cycle to work at the other end.

“More people are beginning to commute by bike but this is a sprawling city with hills.

“Nobody is ever going to do it by bike unless they can take it on the bus or train.”

Last year the Johannesburg council hosted a workshop with Danish and American consultants to discuss the potential for cycle commuting. But nothing happened as a result.

“I’m so frustrated that I don’t ever want to sit in another meeting with the City of Joburg,” Neale says.

“The people you deal with don’t ride bikes. They have all these ideas about how it should work, but they have never actually ridden a bike.”

Yet he remains a strong advocate of cycling despite the difficulties.

“Riding a bike in Johannesburg is a lot of fun. It allows you to interact with your surroundings in such an amazing way because you are not cut off from the outside world.

“People are scared, but if they get on a bike they will find it’s not such a hostile place.”