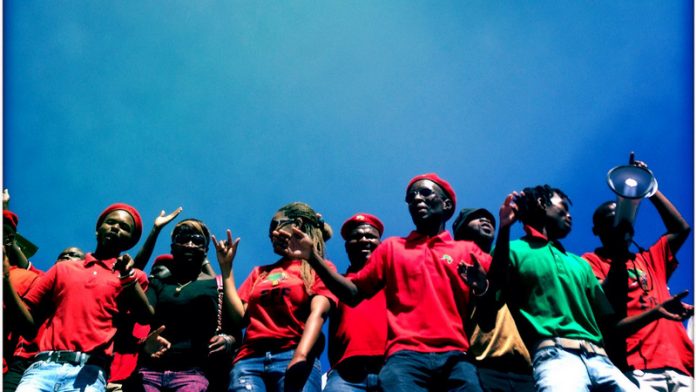 Economic Freedom Fighters (EFF) supporters came out in their numbers to celebrate the launch of the party at the Marikana koppies on Sunday, with estimates of the early crowd numbering well over 5 000 people.

Party members gathered on the koppies to sing anti-Jacob Zuma songs, waving banners of the respective locales such as Johannesburg's Alexandra township, Bophelong in the North West and Kathlehong in the East Rand.

Studio recordings of similar songs blasted out of postered taxis, as attendees set up gazebos to brave the scorching heat.  Meanwhile, EFF leader Julius Malema arrived at the Nkaneng informal settlement in Marikana for the official launch.

Malema, flanked by EFF commissar Floyd Shivambu, was ushered in by eight motor bikers. The crowd shouted "Juju, Juju" as the motorbike engines roared. When the dust settled Malema took his seat next to United Democratic Movement leader Bantu Holomisa. 'Juju, Juju'
?The crowd continued to shout "Juju, Juju" while Pastor Ralekgolela opened the formal programme with a prayer.

"Today we are here to celebrate the birth of a new baby. A baby that we can be proud of. This is a sign that South Africa is a democratic country."

He said the thousands gathered had shown that they were concerned about the future of the country and its economy.

Unlike August 16, when the open field to the east of the koppies was a sea of yellow National Council of Trade Unions and green Association of Mineworkers and Construction Union T-shirts, EFF supports came in all manner of party colours, from red combat caps to berets and overalls.

In a sense, it was at the koppies where Malema launched his political comeback, having been expelled by the ANC in April 2012, a few months before the Marikana massacre happened. By August 18 of the same year Malema was at the koppies exhorting workers to “never retreat, even in the face of death”.

On September 17, a month after the Marikana massacre, Malema was prevented from speaking to workers at the Wonderkop stadium as they gathered to hear about the progress of the wage negotiation. In later speeches, Malema claimed that the police escort that drove him out of Marikana featured a helicopter that followed him “all the way to Pretoria”.

He was later threatened with sedition charges.

Lonmin turf
Until now it has been difficult to gauge exactly how much support Malema wields in the platinum belt – especially at Lonmin, in whose turf he has chosen to launch his party. Workers at the mine, especially those who survived the Marikana massacre, have pledged their allegiance to Malema “for arranging legal representatives and bail money”. But in most cases the workers have stopped short of explicitly saying that they would vote for his party, which was officially registered last week.

In an earlier interview with the Mail & Guardian, Lonmin mineworker Tholakele Dlunga said, “Most people didn't even know his [Malema's] face until after August 16. He helped us here and there, which is how he got the mandate to come here and recruit. But that is not to say because he did these things we will vote for him [in next year's national elections]. Because people have free will.”

However, Molefi Phele, a Lonmin worker interviewed during the rally, said a lot of his colleagues would possibly vote for Malema in next year's elections as he had helped in many ways, such as providing transport to the funerals of his slain colleagues at a time when “our government had abandoned us".

During its national assembly in Orlando last year, the party announced that one of the more prominent leaders of last year's pivotal strike, Xolani Nzuza, had officially joined the party and indications from Lonmin mineworkers were that recruitment for the party at the mine was forging ahead smoothly.

The launch has been postponed several times and was at one point supposed to be on August 17 last year, a day after the Marikana anniversary. – Additional reporting by Sapa