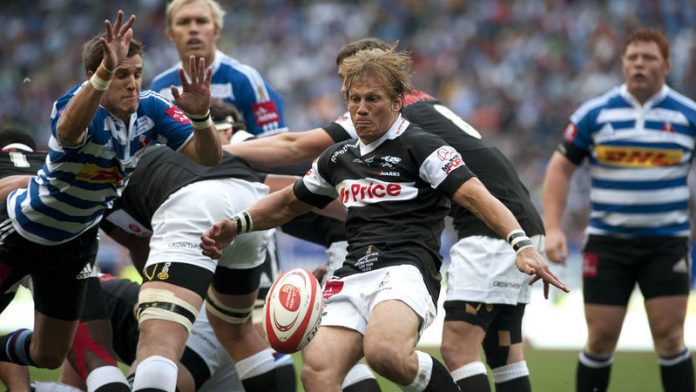 The Sharks ran up a 10-0 lead in the opening six minutes. Lambie goaled a 35m penalty and his halfback partner Charl McLeod intercepted a pass in the WP backline before running in unchallenged to score next to the posts, which Lambie converted.

WP's response was swift and telling. They exerted great pressure on a Sharks scrum some 20m out and then secured a turn-over which centre Damian de Allende used to good effect by darting through the Sharks' backline for a try under the posts. Catrakilis added the conversion (10-7).

Soon afterwards WP were forced to bring on substitute Schalk Burger as temporary replacement for flanker Siya Kolisi who suffered a heavy knock.

During the last 20 minutes of the first half referee Jonathan Kaplan awarded a steady stream of penalties in quick succession, mostly to the Sharks.

Lambie was on target with two of four attempts, as well landing a drop goal, while Catrakilis converted two (19-13), which allowed the Sharks to secure a 19-13 halftime lead.

After the break, WP and the Sharks each added to the tally in the first 10 minutes via Catrakilis and Lambie penalties (22-16).

It appeared that neither side could strike a rhythm as they failed to impose their will on the game. Lambie snapped over a second drop-goal in the 52nd minute while Kurt Coleman managed his first points in the match with a penalty three minutes later (25-19).

As the match approached the hour mark, both sides started looking for opportunities to run the ball, with the Sharks looking the more dangerous.

A Sharks raid on the WP 22m line proved hard to contain and McLeod squeezed through the smallest of gaps to snatch his second try of the match. Lambie failed with the conversion, but the Sharks had taken an 11-point lead (30-19).

WP continued to try to cross the Sharks' line, but the 11-point deficit proved too much. Meanwhile, Lambie succeeded with a fifth penalty two minutes before the final whistle. – Sapa