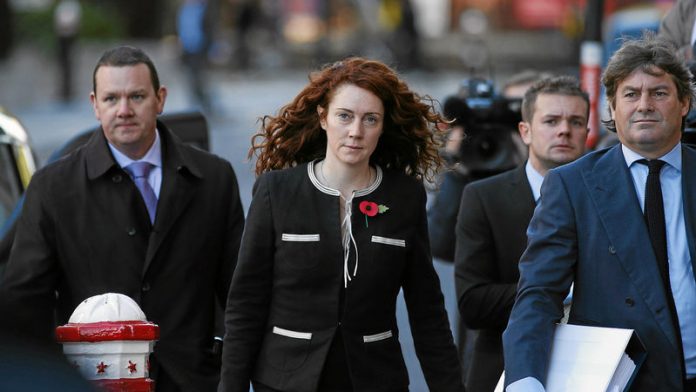 Three former news editors from the News of the World have pleaded guilty to a conspiracy to hack cellphones during a six-year period when Rebekah Brooks and Andy Coulson were editing the Sunday title, it was disclosed in court this week.

The two high-flying tabloid editors are accused of knowing about voicemail interception at the newspaper, of plotting to pay money to corrupt public officials and, in the case of Brooks, participating in "a cover-up" when concerns about hacking became public in 2011.

Opening the trial of Brooks, Coulson and six others at the Old Bailey Central Criminal Court in London, crown counsel Andrew Edis QC said the guilty pleas meant that the original claim made by the tabloid's publisher, News International, that the hacking was the work of just one reporter, Clive Goodman, was demonstrably incorrect.

The three former News of the World news editors who had pleaded guilty to the interception of voicemails were Greg Miskiw, Neville Thurlbeck and James Weatherup.

Edis told the jury that the paper's specialist hacker, Glenn Mulcaire, had separately admitted intercepting the messages of the murdered schoolgirl, Milly Dowler.

"There is no doubt that initially News International was keen to say that phone hacking in the News of the World was really limited to Mr Goodman but this inquiry has proved conclusively that that is not true," Edis told the jury in his opening statement at the start of a high-profile trial that it is expected to last up to six months.

The prosecuting counsel said that the management of the paper, including Brooks and Coulson, "must have known" about the hacking.

Brooks edited the News of the World between May 2000 and January 2003, before moving on to edit the Sun. Coulson, her deputy, was then editor until January 2006.

Brooks and Coulson deny all the charges. – © Guardian News & Media 2013

Phone-hacking trial to begin in September 2013