Arsenal beat Liverpool to open gap at the top 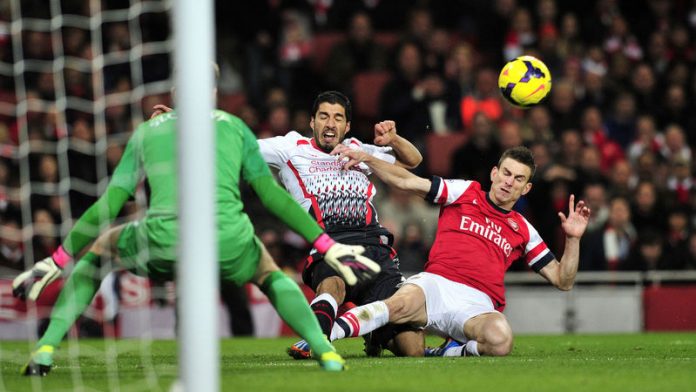 Arsenal maintained their challenge for a first trophy in nine seasons when they beat Liverpool 2-0 at the Emirates Stadium to open up a five-point lead at the top of the Premier League on Saturday.

A brilliantly taken opener from Santi Cazorla, who smacked in a rebound after 19 minutes, and an even better goal from Aaron Ramsey, who struck a swerving shot with the outside of his right boot after 59 minutes, took Arsenal to 25 points from their 10 matches.

Chelsea, who lost 2-0 at Newcastle United after winning their previous six games in all competitions, are second, level on 20 points with third-placed Liverpool.

But Chelsea's performance did not please their boss, Jose Mourinho, who said: "I did not like my team today, I am disappointed."

Manchester City, who beat Norwich City 7-0 at the Etihad Stadium; Southampton, who drew 1-1 at Stoke; and Tottenham Hotspur, who play at Everton on Sunday, all have 19 points, but Spurs can move into second place on 22 if they win at Everton on Sunday.

Champions Manchester United continued their improvement after their sluggish start to the season with a 3-1 win at Fulham, and although they stayed eighth, they gained points on some of the teams above them.

Liverpool, who had won three of their last four league games and drawn the other, started brightly at Arsenal but the home side took a grip on the game after breaking the deadlock.

Ramsey, who has now scored 10 goals this season, told BT Sport: "We got stuck into them and managed to get a goal early, which put us in good shape for the second half, and we managed to finish the job.

"They were full of confidence, they have been in fine form and they showed that early on, but we managed to weather the storm and got the goals."

Sluggish Chelsea
Chelsea, who had also been in good form recently, never got going against Newcastle, and after a drab first half played in the rain at St James' Park, they allowed Newcastle to take control of the game in the second half.

The Magpies went ahead when Yoan Gouffran headed in Yohan Cabaye's accurate free kick directed to the far post after 68 minutes, and Loic Remy stabbed Newcastle's second in off a post after 89 minutes to seal the points.

"I did not like my team today," Mourinho told BT Sport.

"We had a couple of chances to equalise but they were more in the game than us, fought more than us and they were much more committed than us, so they were the best team on the pitch."

Hart, who has made a number of errors in recent weeks, watched from the substitutes' bench as six different scorers and an own goal gave City their biggest win in the top flight since 1968 and took them into the top four.

If Norwich's John Ruddy, Hart's England deputy, was hoping to capitalise on his rival's situation, City had other ideas, and Ruddy spent the afternoon picking the ball out of his net seven times.

Pellegrini told the BBC: "Norwich did not have a chance to score, we scored seven and could have scored more."

It was Norwich's second heavy defeat in Manchester in five days, having lost 4-0 to United in the League Cup fourth round on Tuesday, and coach Chris Hughton looked stunned afterwards.

"It's very difficult, I've never suffered a scoreline like that as a manager," he said. "Man City were outstanding today, but if you gift them the types of goals we did, then it becomes difficult to win any football match. We were nowhere near it today."

The rout started when Bradley Johnson put through his own net after 16 minutes and the goals then flowed from David Silva (20th), Matija Nastasic (25th), Alvaro Negredo (36th), Yaya Toure (60th) with a superb free-kick, Sergio Aguero (71st), and a smart finish from Edin Dzeko (86th).

The result left Hughton under increased pressure with his team in the bottom three.

United stroll
Manchester United, putting their shaky start to the season under new manager David Moyes behind them, were convincing 3-1 winners at Fulham with Antonio Valencia, Robin Van Persie and Wayne Rooney wrapping up the points in the first 22 minutes.

Elswehere, Sunderland finished with nine men at Hull City after Lee Cattermole and Andrea Dossena were sent off in first-half stoppage time during their 1-0 defeat.

Stoke goalkeeper Asmir Begovic scored one of the quickest goals in English league history, hoofing a huge clearance into Southampton's net with the goal timed at 14 seconds.

Southampton scored a more orthodox equaliser through a Jay Rodriguez header to rescue a point. – Reuters