The 11 most extreme pieces of performance art 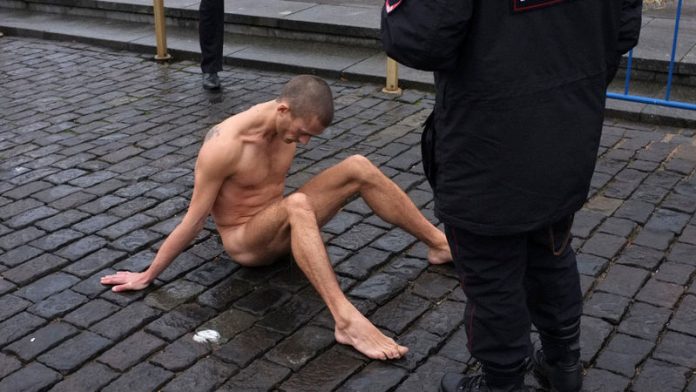 Artist Pyotr Pavlensky has made eyes water all over the world with his protest against Russia's descent into authoritarianism – nailing his testicles to the ground in Red Square on Sunday to denounce Vladimir Putin's "police state". Yet connoisseurs of performance art are probably already saying: "Meh, seen it all before." For Pavlensky's protest is the latest in a long line of performance art pieces that have endangered life and limb.

1. The vanishing Dutchman
No one will ever know if Bas Jan Ader expected to die in his performance In Search of the Miraculous. In 1975, the Dutchman set out from Cape Cod in a small sailing boat to cross the Atlantic. This was part of an artwork that also included a series of pictures of bland Los Angeles scenes. It was as if he sailed out to find something deeper than freeways and fast food. His broken boat was found 150 miles off the coast of Ireland. It was empty.

2. Marina and the star of fire
Today she hangs out with Lady Gaga but in 1974 the Belgrade-born, New York-based artist Marina Abramovic nearly joined Bas Jan Ader as a martyr to the imagination. In Rhythm 5, she placed on the ground a large, five-pointed wooden star, an echo of the communist red star, soaked it in petrol and lit it. As it blazed, she threw in bits of toenail, fingernail and hair, which she cut off in front of a watching audience. Then she jumped through the flames into the centre. She did not know the fire had sucked up all the oxygen and, since the audience couldn't see her clearly for smoke, it took several moments for them to realise she was unconscious. Abramovic was rescued just in time and rushed to hospital.

3. Shot by a rifle, nailed to a car
In 1971, young American artist Chris Burden stood still while a friend aimed a rifle and shot him in the arm. The performance was caught on video. It was a violent time, with war in Vietnam and riots in US cities. Burden wore a T-shirt and jeans and, after being shot, clutched his arm, looking stunned even though he planned it all. He recovered and went on to have himself nailed to a Volkswagen.

5. The castration myth
In attacking his own genitals, Pyotr Pavlensky may have been inspired by inaccurate stories about Austrian artist Rudolf Schwarzkogler. When he died in 1969, it was widely believed he had killed himself by cutting off his own penis. The works of this Vienna actionist do include images of castration, but they were mocked up. So Schwarzkogler's reputation as the ultimate performance artist is somewhat exaggerated. He actually died after falling from a window.

6. Surgeon, remake me
In The Reincarnation of Saint Orlan, a project that started in 1990, the French artist Orlan has altered herself with a series of operations. Through plastic surgery, she aims to have a completely new appearance based on bits of western paintings that define the ideal of beauty, including Botticelli's Venus and the Mona Lisa. She calls the project "a struggle against the innate".

7. Equal rights for cyborgs
In retrospect, Orlan's operations look less like feminist body art than the beginning of a cultural obsession with cyborgs and post-human transformations. Enter the Catalan-based Neil Harbisson, who, having been born unable to see colours, has been implanted with a device to "hear" them. In 2004, this "eyeborg" extension was allowed to feature on his passport photo, a milestone in cyborg rights. He is the founder of the Cyborg Foundation.

8. Yoko stripped with scissors
In Cut Piece, an early piece of feminist art first staged in 1964, Yoko Ono knelt on the ground and laid down a pair of scissors. The audience were invited to come forward and cut off any piece of her clothing. It started politely but became more and more threatening as her clothes were reduced to rags and she kneeled in her underwear.

9. A bath in blood
Hermann Nitsch was part of the Vienna actionist movement that set out to shock Austria with gory images of violence, blood and apparent self-torture. His grotesque Wagnerian Gesamtkunstwerk is, however, the Orgiastic Mysteries Theatre, in which crowds of young people bathe in blood and conduct animal sacrifice at rituals in his castle. The last such rite happened in 1998.

10. Testicles for tea
In 2012, Japanese artist Mao Sugiyama had his genitals surgically removed, to raise awareness of asexual rights. After keeping them in the fridge for a while, he cooked them and served his friends a meal of steaming hot bollocks. But was it art? Hard to say without actually tasting them.  –guardian.co.uk © Guardian News and Media 2013

Mail & Guardian pick:
11. Steven Cohen and the cock
No list of extreme performance art is complete without mentioning South Africa's very own Steven Cohen. Cohen was arrested in September in a "highly touristic place of Paris" and charged with sexual exhibitionism for parading around Trocadero Square facing the Eiffel Tower, clad in a bird costume, high heels and a living rooster tied to his genitals.