Gordimer: Lauded abroad, but too sharp for whites in SA 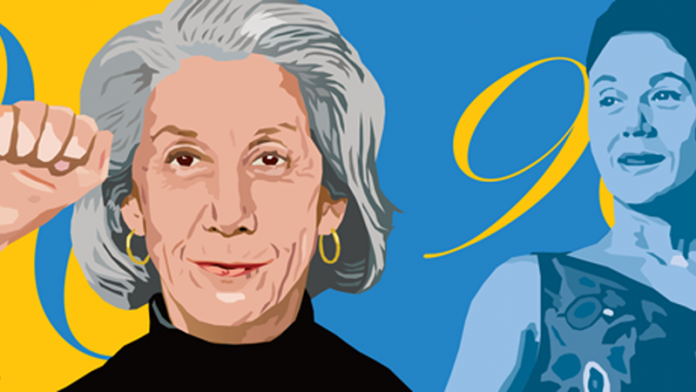 ‘Can you play the harpsichord?” and the response: “I don’t know, I haven’t tried”, is what came to mind, not entirely irrationally, when I sat down to write a piece on reading and reviewing Nadine Gordimer. Despite many years as a reader and reviewer, this seemed a formidable task. So, with that in mind and well aware that this is academic territory, I determined nevertheless to approach this as I usually do a review, for the “common reader” of South Africa. (And the “common reader”, for those unfamiliar with Virginia Woolf’s definition, is one who “reads for [her] his own pleasure rather than to impart knowledge or correct the opinions of others …”)

Gordimer and my own late mother were born just a month apart, and in the early years of their lives both lived on the East Rand, conceivably passing each other on trains, or on the Main Reef Road, which went out from the city of Johannesburg to the mining towns such as Springs where Gordimer grew up. Strangely, though my mother had a degree in anthropology and English, I cannot recall that she ever had, in a house full of books, a Gordimer novel.

The life she lived on the mines was precisely that white, middle-class, liberal (more conservative than they could see or admit) existence, which Gordimer frequently and relentlessly examined. Her novels would have seemed far too political and heavy, far too close to home, outrageous – impertinent even.

I think this was the case for many white South African readers; Gordimer was, and for many still is, too sharp for them. Horses at the water, but not drinking.

It was many years before I came to read Gordimer. The first book of hers I read was July’s People, which if you read it in the year it came out, 1981, was as frightening a prediction of the future for white South Africans as you could hope to find. Was this one of the novels that induced us, or confirmed our decision, to emigrate? (As we were too addicted to South African politics to endure emigration we soon came home).

Or did it encourage us to return, to trust in the kindness and exasperated goodness of people like July, who shelters his employers of 15 years when a bloody revolution breaks out in this early example of speculative fiction? This was the only Gordimer I owned for years.

It is widely accepted that Gordimer was far more revered and respected outside South Africa. Even before she won the Nobel Prize for Literature in 1991 a vast body of critical studies amassed around her work, and continues to do so, perhaps to a lesser extent now.

But for the common reader “shouts” (of the more respectable kind – that is, quoted from actual post-publication reviews) on the covers of reprinted novels show the esteem in which she was held.

Penny Perrick in the Sunday Times in the United Kingdom: “If one were never to read any other literature about South Africa, Gordimer’s work would be enough … As a literary keeper of records she has no peer.” And Margaret Forster: “This is fiction as it should be, serious in intent and execution and yet gripping and deeply satisfying.”

For the average white South African reader, Gordimer’s portrayal of white characters was too close to the bone and often very unattractive. This did not distress her readers in the UK and elsewhere, however.

After several years of fiction reviewing I was asked to do a Gordimer novel, The Pickup, published in 2001, and long-listed for the Booker (again – she’d won it in 1974 for The Conservationist). I offered a review that was fairly cool, and far too glib. Rereading this novel recently I marvelled at its prescience on the global question of “illegal” aliens, those sans papiers, and the boldness with which Gordimer imagines how a Westernised, white Jo’burg woman might fit into a Muslim village household, perhaps in Saudi Arabia or Somalia.

Her most recent novel, No Time Like the Present, was short-listed for the 2013 English Fiction M-Net Award. As one of the judges I was delighted to see it contesting this award. Gordimer’s presence undoubtedly added gravitas to the proceedings.

This novel is vintage Gordimer in her late style – long, dense sentences, often awkward, fragmented in the way our thoughts pile up, rush on, spark off to something else. It reminded me of Picasso’s later post-Cubist paintings, full of the essentials and power.

Her integrity of purpose as a writer is as steady as ever in this post-1994 work, once again a clear, analytical look at current South Africa. This novel is set just before and during Jacob Zuma’s first term as president, and looks at his rape trial and continuing popularity (and the significance of this for women especially) as well as corruption and xenophobia. And it deals with that ever-resilient South African issue, emigration – why some go, and why some determine to stay.

Here is a writer who has always taken herself seriously as an author – what a satisfying read she delivers. Still! We have to thank her for this extraordinary body of work, beautiful, serious, eminently re-readable.