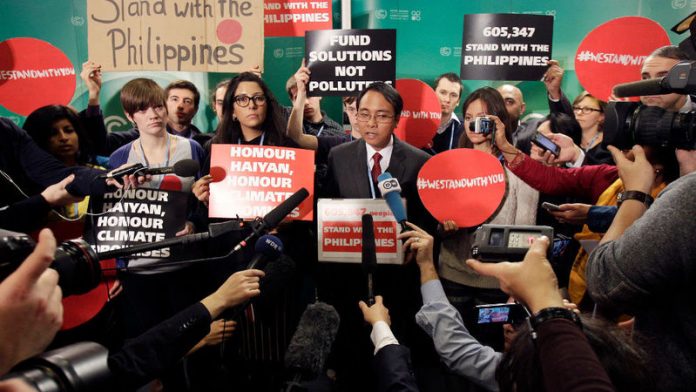 A massive walk-out of 800 delegates from non-governmental organisations characterised the second-last day of the 19th Conference of the Parties (COP19) to the Kyoto Protocol in Warsaw, Poland, on Thursday. The delegates were protesting against the low ambition of the conference, the influence of dirty energy and the lack of new financing.

China led 132 countries in a similar walk-out the day before in protest against the lack of progress on funding for "loss and damage". This is the argument at the core of the previous 18 such annual meetings – the developing world wants the developed world to pay for current and future environmental damage from climate change. They say the mostly Western countries are responsible for the majority of global greenhouse gas emissions, so should take responsibility for the environmental damage caused.

Chief Phillippine negotiator Naderev "Yeb"​ Sano has been fasting for the past 11 days of the conference in support of this argument. Sano's delegation opened COP19 when the fallout from Typhoon Haiyan was still unknown, saying climate change would make these disasters a new normal. "We refuse, as a nation, to accept a future where super typhoons like Haiyan become a fact of life," he said.

The lack of expectations meant the conference started with little hype and great concern that host country Poland generates 90% of its energy from coal. The country was holding a conference on coal at the same time as the climate talks.

What little hope there is stems from the Durban Platform agreement thrashed out in the early hours the day after COP17 concluded in 2011. It sets out the process by which all parties to the UN Framework Convention on Climate Change will commit to a new, legally binding agreement to reduce greenhouse gas emissions. The global agreement has to be agreed on by 2015 and in force by 2020, which made it imperative that delegates thrash out a large part of the draft version this year for consideration at next year's COP20 in Lima, Peru.

Poor example
The Green Climate Fund exemplifies the problems being experienced in the developing world and by environmental organisations. The fund is supposed to make $100-billion a year available by 2020 to help countries adapt to climate change. But as that is still seven years away, countries are requesting "fast start" financing to help them deal with climate change now. But little progress has been made and the fund remains virtually empty.

Political changes in some of the world's biggest carbon emitting nations have lowered expectations as they pull back from promises to lower emissions. Australia, which has elected a government that does not believe in human-driven climate change, has pulled out of all promises. Canada has lauded this and pulled out of the Kyoto Protocol. Japan has lowered its targets and Europe is refusing to increase its emission reduction targets. The United States has pushed through laws only by bypassing Congress through executive orders.

This all comes at a time when the science around climate change has become unequivocal – humans are driving climate change and the world is getting warmer. This year will be the seventh hottest on record. The most recent Intergovernmental Panel on Climate Change report, released in October, concluded that it was "virtually certain" humans are responsible for climate change.

The World Bank's Turn Down the Heat report said current pledges by nations to lower greenhouse gas emissions – even before some lowered their emission reduction targets – would still see the world 4°C warmer by 2060. Another report by non-governmental climate change organisations, Banking on Coal, found that coal production had increased by 70% since 2000, driven by investment banks in Europe, the US and China.

The 19th Conference of the Parties ends on Friday. And traditionally, the host country has had to lock delegates in a room on the last night to force an agreement so that it can say some success has been achieved.

Private climate funding is the next finance bubble