The bar is too high for SA’s inept leaders 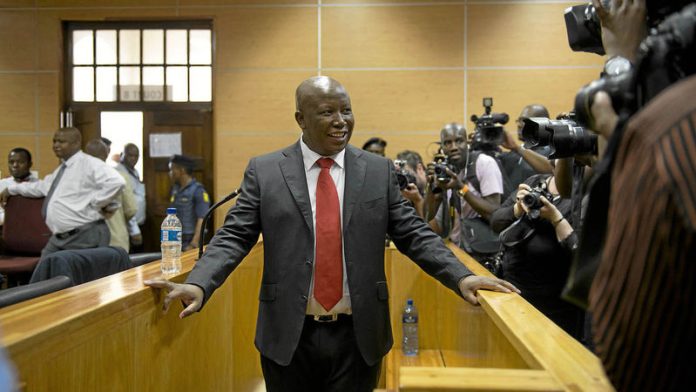 There is no reason to dispute what Julius Malema has been saying since re-entering the political stage: that our country needs a new breed of leaders. Nor is there any doubt about the role that his party, the Economic Freedom Fighters (EFF), is playing as one of the parties trying to occupy the emerging political space.

After almost 20 years of democracy, the promise of a better life for all has not materialised for the majority of South Africans, many of them the generation of young people who never experienced the oppressive and discriminatory policies of apartheid directly.

Yet most of these young people face multiple disadvantages, in some cases worse than those their parents' generation faced. They are trapped in a cycle of poor housing conditions, low income and poverty. There is widespread unemployment, the health and education systems in many towns and villages are in a deplorable state, and the chasm between rich and poor has deepened.

In countless communities around the country, the post-apartheid democracy has not produced the opportunities and social outcomes it promised. Whether one can assume from Malema's impassioned rhetoric about economic freedom that he is the one to make social justice a reality for the majority of South Africans is left to one's imagination.

In the absence of much evidence of Malema helping the poor when he was leader of the ANC Youth League, however, it would require a great leap of the imagination to predict how he will be transformed into a politician ready to channel farms and financial resources to the people first.

The bar has been set very high for Malema. He has been compared with Thomas Isidore Sankara, the man known as "the Ché Guevara of Africa". In four years as president of the country he named Burkina Faso (meaning "land of upright people"), he steered it away from the destructive legacy of colonialism.

Malema is no Sankara. Among the causes he championed in his four years as one of the most powerful leaders of the youth league – and the ANC itself – was the election of President Jacob Zuma. As Malema leads the EFF on the road to the "riches" of political leadership, he is caught up in corruption charges.

The comparison with Sankara demands a great imaginative effort. On the face of it – the red beret, the brilliant rhetoric of economic freedom – Malema seems to be the living embodiment of both the hope Sankara evoked in his people and his substantive achievements. But can Malema convert rhetoric into the real change that many of his young (and old) followers are hoping for?

If elected, would he be able to transform himself from being a member of the class of "those who stole from us … while the people continue to suffer" (as Andile Mngxitama put it in an open letter to him in the Sowetan in July 2011) into a benevolent politician for whom voters come first?

Would he no longer be the author of the kind of self-serving excesses we saw during his leadership of the youth league?

Recently I was in Rwanda, travelling with one of my students. She was interviewing women in Parliament for a postgraduate degree on women's leadership in the aftermath of genocide and mass violence. I went there to explore how Rwanda might produce a countervailing narrative on genocide, drawing on the rich research opening up there.

In our encounter with ministers of Parliament, what struck me was that one could tell what was most important to them not only by what they were telling us but also by how they behaved. The first thing you noticed was the absence of flashy cars and bodyguards around these ministers.

Even the official vehicles outside our hotel, where the country's president was speaking at a conference, were all Toyotas.

Contrast this with South Africa and the bling lifestyle of our leaders. In the narcissistic quest for the material pleasures of political position, seemingly pursued at any cost, some politicians' time and energy is directed at looking out for themselves rather than paying careful attention to how their behaviour affects the people who voted for them. South Africans who have not tasted the fruits of democracy see this and experience it as a deep sense of betrayal.

To use "the boers" as a bogeyman, as Cyril Ramaphosa did recently on the ANC campaign trail, is to insult people's intelligence. When they have faced bitter disappointment and they feel used, people look for evidence of hope to help them to get out of the trap of their connection to the governing political party that has let them down. Disillusionment is a feeling shared collectively by many South Africans. This calls for leaders of stature who will not be swayed by greed – leaders who will act responsibly and with integrity.

For nearly 20 years, our politicians have fed the people with words that reverberate and that inspire a sense of hope. Our country needs more than rhetorical brilliance, though; we need leaders who can build a foundation for a politics of empathy and an era of integrity in politics. They should eschew divisiveness and cultivate a shared consciousness about social justice.

In a society marked by inequality, we need leaders with vision and imagination, leaders who will place healthcare and education at the centre of planning for social change. Leadership matters.

Editorial: ANC does not want to self-ref lect

Zuma’s mollycoddling is justified criminologically, but not the damage he did to the country

Pandemic vote: What will the local government elections look like?

Malema back in court, as police say they followed protocol at Madikizela-Mandela’s funeral