Thailand's Prime Minister Yingluck Shinawatra said on Monday she would "open every door" to return Bangkok to peace after police used rubber bullets against protesters seeking to topple her government.

The violence is the latest twist in a conflict pitting Bangkok's middle class and royalist elite against the mostly poor, rural supporters of Yingluck and her brother, Thaksin Shinawatra, a populist former prime minister who was ousted in a military coup in 2006 and lives in self-imposed exile.

Yingluck told a news conference that police would not use force but the national security chief said rubber bullets were being used as protesters threatened to advance on Yingluck's office, the focal point of the demonstrations since the weekend.

A Ramathibodi Hospital official later said two protesters had been wounded by gunfire but it was not known who shot them.

The number of protesters was well down on the 30 000 dispersed around various sites on Sunday, but hard-core elements broke through concrete barriers set up around Government House, Yingluck's office in the heart of Bangkok.

After using canister upon canister of teargas to repel them on Sunday, police stepped up their response on Monday.

"We are alternating between the use of water cannons, teargas and rubber bullets," Paradorn Pattanathabutr, the head of the national security council, said.

"Rubber bullets are being used in one area only and that is the bridge near Government House."

A Reuters reporter saw a man in his early 20s fire three shots from a pistol in the direction of police protecting Government House.

Teargas was used against protesters trying to tear down barriers at the Bangkok metropolitan police headquarters.

They pulled back in late afternoon but protest leader Suthep Thaugsuban, who rejected Yingluck's call for talks, told supporters he was determined the assault would go on and they would seize the headquarters on Tuesday. Suthep (64), who resigned as a Democrat lawmaker to lead the protests, wants a vaguely defined "people's council" to replace Yingluck's government and a parliament of nominated worthies.

"The protesters' demands are impossible to meet under the framework of the Constitution," Yingluck said.

Historic crisis
Suthep met Yingluck late on Sunday but insisted there had been no negotiations to end Thailand's worst political crisis since bloody unrest in 2010.

He said the meeting was arranged by the powerful military, which has taken sides against Thaksin-allied governments in the past and put down a drawn-out pro-Thaksin protest in 2010, when more than 90 people were killed.

The government at the time – in which Suthep was a deputy prime minister – gave the military powers under an emergency decree to clear pro-Thaksin "red shirts" from central Bangkok.

This time the army has carefully tried not to get involved, only reluctantly providing unarmed back-up for police.

"The military has positioned itself as neutral and it wants to see a peaceful way out," Yingluck told the news conference.

Three people were shot dead at the weekend, including two government supporters who had been at a rally in east Bangkok and a student from a nearby university.

The remains of a fourth person were found in a burnt-out bus, police said. 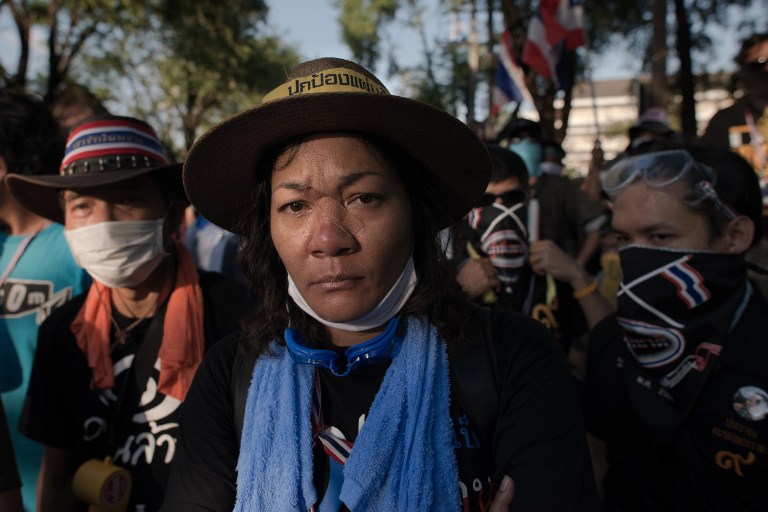 'Tools of the regime'
Suthep has set a Tuesday deadline for her to step aside and his movement has called for civil servants to go on strike.

"Government workers are still tools of the Thaksin regime," said Akanat Promphan, a spokesperson for the protest group.

Yingluck said government offices were open as normal and many ministries appeared to be functioning.

Thaksin was convicted in absentia of graft in 2008 but he dismissed the charges as politically motivated.

He is widely seen as the power behind Yingluck's government, sometimes holding meetings with the Cabinet by webcam.

He is idolised by the urban and rural poor but reviled by the royalist establishment and urban middle class, who accuse him of undermining the monarchy, which he denies.

The protests have been joined by the opposition Democrat Party, which was trounced by Yingluck's Puea Thai party in a 2011 election.

It has lost every election for the past 13 years to Thaksin or his allies.

The baht picked up slightly after Yingluck's comments and the stock market, which had been down more than 1%, ended up 0.2%

The baht has fallen 3% since early November and the benchmark stock index has lost 5.8%  in the past month. – Reuters