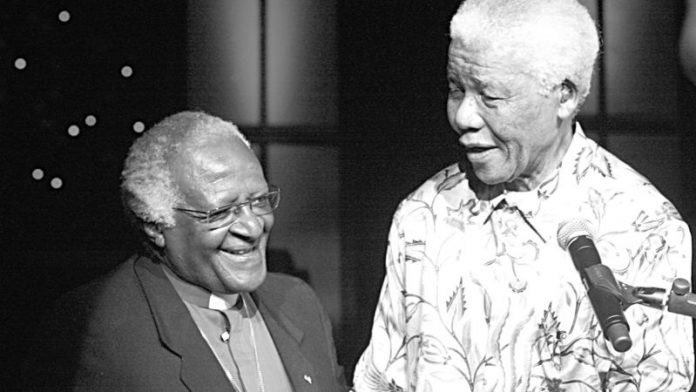 Archbishop Desmond Tutu paid tribute from Cape Town on Friday afternoon to his longtime friend, ?and dismissed naysayers who have been predicting that South Africa will degenerate into chaos following Mandela’s death.

He spoke about the man who inspired a nation, but pointed out that Mandela had weaknesses.

"What’s going to happen to us, now that our father has died? Does it spell doomsday disaster for us?" asked Tutu.

"Some have suggested that after he's gone, our country is going to go up in flames."

Tutu said this was meant to discredit South Africans and discredit Mandela’s legacy.

"The sun will rise tomorrow and the next day and the next. It may not appear as bright as yesterday, but life will carry on."

Tutu said his message to South Africans was to follow in Mandela’s footsteps. "For the past 24 years, Madiba taught us how to come together and believe in ourselves and each other, a unifier from the moment he walked out of prison.

'Forgiveness'
"He taught us extraordinarily practical lessons about forgiveness, compassion and reconciliation. This terrorist who today is regarded the world over without exception as an incredible icon, symbol of reconciliation, of forgiveness, of magnanimity.

"We have an incredible capacity and God is asking us South Africans – please become what you are. Show the world that yes, indeed we are members of one family, not as a figure of speech but it is for real.

"Who’ll ever forget how Ellis Park erupted on the day of the final as Madiba walked out wearing a Springbok jersey; that action was worth more than all the sermons we could preach about reconciliation.

"Who can forget him as president of South Africa going to Orania to have tea with Betsie Verwoerd, tea and koeksusters; who could forget that he had lunch in the presidency with the man who prosecuted him in the Rivonia trial and had asked for the death penalty to be imposed [on Mandela]?

"He embodied our hopes and dreams and symbolised our enormous potential that has not always been fulfilled."

But he pointed out that Mandela was "not a lone wolf" and "did not fall from the sky".

He had learnt about leadership and culture growing up in the care of abaThembu regent Nkosi Jongintaba Mtirara after the death of his father.

"He learned from the experience of developing a voice for young people in anti-apartheid politics, from physically prosecuting the struggle," Tutu said.

He described the Madiba who emerged from prison in February 1990 as virtually flawless.

"Did he have weaknesses? Of course he did."

Loyalty
Tutu said among Mandela’s weaknesses was his steadfast loyalty to the ANC and to some of his colleagues who ultimately let him down.

"Was he a saint? Not if a saint is entirely flawless, but he was saintly because he inspired others powerfully."

Tutu said Mandela possessed many of God’s attributes of goodness, compassion, concern for others, desire for peace, forgiveness and reconciliation, and was consistent.

He spoke about how Mandela continued to care for communities long after his retirement.

"When we saw him after his retirement going to rural areas, encouraging captains of industry to contribute to the building of schools and classrooms, it wasn’t just a streak, it was something that was deep in him."