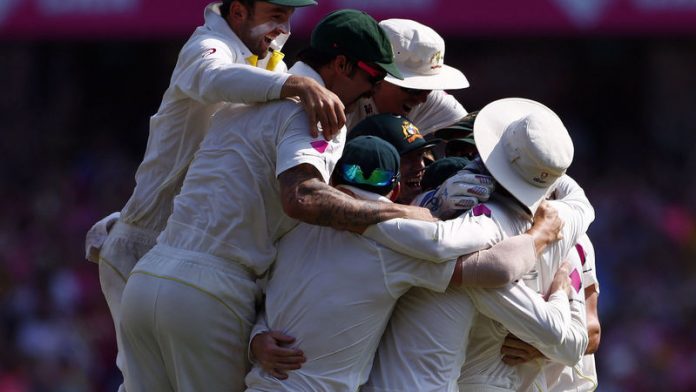 Australia obliterated England's batting in a shade over 31 overs to claim a thumping 281-run fifth Test victory with more than two days to spare and seal only the third 5-0 sweep in the long history of Ashes series on Sunday.

The triumph at a sunbaked Sydney Cricket Ground completed a remarkable turnaround for Australia, who were in disarray after being swept themselves in India and going down 3-0 in England to lose a third successive Ashes series last year.

A big clue to how Australia managed that turnaround came when paceman Mitchell Johnson was awarded the Compton-Miller medal as Man of the Series after taking 37 wickets at a shade under 14 apiece over the five Tests.

Johnson's ferocious pace again played an integral part in Australia's victory in Sydney but it was no one man show and his fellow quick Ryan Harris won Man of the Match honours after taking five for 25 as England were skittled for 166 on Sunday.

"It's very special after the roller-coaster ride, the ups and downs of 2013," said Australia captain Michael Clarke, who also played in the 2006-7 sweep but clearly not that of 1920-21.

"It's been a lot of work to get us where we are today. I said to the bowlers at the start of the series that I thought they were the best attack in the world and I think they've shown that in five Test matches."

Johnson's revival was even more remarkable than that achieved by Australia, turning him from a figure of ridicule for England's travelling Barmy Army into a bowler who struck fear into the touring batsmen.

It was his intervention after tea on Sunday that turned what had been a stately progression to victory into another humiliating rout for the tourists.

After finally dismissing Chris Rogers for 119 and bowling Australia out for 276, England stumbled to the break on 87 for three chasing a highly improbable 448 for victory.

A fifth thumping victory had always looked on the cards after Australia's pace attack tore through England's top order in the first hour of day two.

A more spectacular collapse in 11 balls after the second interval on day three made it certain with Johnson dismissing opener Michael Carberry for 43 and Gary Ballance three balls later in the first over.

"Mitchell's bowled a couple of spells in this series that are without doubt as good a spells as I've seen in my career," said Clarke.

Spinner Nathan Lyon took over for the next over and he dismissed Jonny Bairstow (zero) and Scott Borthwick (four) to reduce the tourists to 95-7 in a matter of minutes.

With England's top order having failed yet again, Ben Stokes (32) and Stuart Broad (42) provided their country's stiffest resistance down the order but they could only delay the inevitable.

Harris bowled them both before performing the coup de grace on debutant Boyd Rankin and the SCG, bathed in pink in honour of Glenn McGrath's breast cancer charity, rose to hail the Australia team.

"I think today's batting was a culmination of being under the kosh for four and a half games," said England captain Alastair Cook.

"Credit to Australia, I can't even count on how many sessions we won in the series. That's a pretty daunting stat to take but a very realistic statistic."

Australia had already reclaimed the coveted urn after winning the Brisbane Test by 381 runs, the Adelaide match by 218 runs, in Perth by 150 runs and taking an eight-wicket triumph in Melbourne.

For a dispirited England, their triumphs in India in 2012 and in Australia in 2010-11 will appear a distant memory and they face an immediate future of recrimination and rebuilding.

Aside from criticisms of his captaincy, Cook's miserable series was a reflection of that of a vaunted batting line-up which simply failed to fire in the face of sustained pressure from the Australians.

England's other top batsmen did not fair much better with Jonathan Trott returning home after the defeat in the opening Test to deal with stress-related issues and Ian Bell and Kevin Pietersen failing to live up to their billing.

The England bowlers have little more to crow about and one of the many statistics being bandied about to illustrate Australia's supremacy in the series will embarrass them.

While Australia took all 100 wickets in a five-Test Ashes series for the first time, England failed to dismiss their opponent's number 11 batsman, Lyon, even once.

"It's tough knowing you've played your five matches and lost them all badly," Cook added. "We just weren't good enough to turn it around." – Reuters