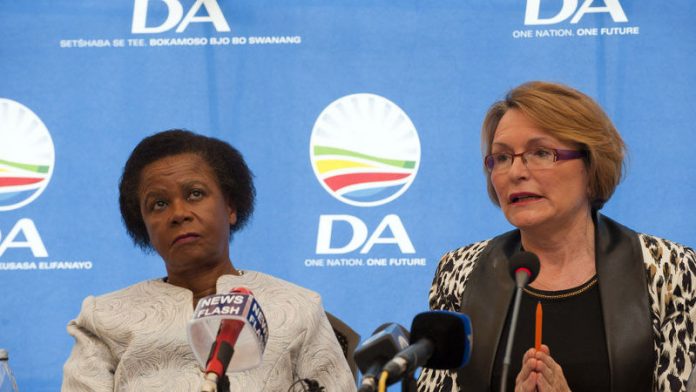 Agang SA leader Mamphela Ramphele has blamed the Democratic Alliance (DA) for jumping the gun in announcing her joining the DA, in a disastrous week for the opposition which saw a short-lived alliance between the two parties aborted before it had properly begun.

According to a joint statement issued by Ramphele and Zille on Friday, the Agang SA founder was to be welcomed into the DA at a press conference in Johannesburg on Monday. But a different message from Ramphele was uploaded onto Agang SA's website.

"You may have by now seen 'joint' statements issued by the Democratic Alliance in which it is claimed that I will be accepting DA membership on Monday," she said. "This is not true. Nor did I agree to any such statement."

"I don't want this to become a 'he said, she said'," she told journalists at a hastily-convened press conference on Monday morning in Braamfontein. "But suffice to say the statement I saw was different to the statement that was later released."

She said the "premature announcement" about party membership revealed that the timing of a merger was wrong, but was careful to hedge her bets by still praising the work of the DA and leaving open the possibility of future collaboration after the election.

'She cannot be trusted'
The DA has been less forgiving, however.

On Sunday, Zille said Ramphele had reneged on an agreement to be the DA's presidential candidate despite the party negotiating in good faith, and accused her of playing a cat and mouse game.

The announcement last Tuesday, that Ramphele would be the DA's presidential candidate in the upcoming general elections with a technical task team left to work out the details, took both party's members by surprise. Agang members in particular were not consulted and reacted with outrage.

While Ramphele blamed the DA for rushing the details of the partnership, and insisted she made the right decision at the time to announce her candidacy for the DA without consulting her party, her party took a different tack.

Heeding concerns
Other party leaders at the press conference credited the members for exerting pressure in scuppering the deal.

"The members of this party spoke unequivocally last week and said: our leader we don't want this to happen in the way that it's happening. She went to the members and listened to them."

But Ramphele's climb-down has left the South African public with more questions than answers.

Zille announced at her own press conference on Monday that she had been in negotiations with Ramphele since 2010, when the latter assisted in the DA/Independent Democrats merger.

Details not worked out
Asked why such simple details as membership had not been worked out beforehand in the long negotiations or her members consulted, Ramphele repeatedly referred to the example of Nelson Mandela, who negotiated with his jailers without heeding his own party.

But she acknowledged that her party's interim constitution makes it "very clear" that Agang could only go into an alliance or merger at national congress or, if it urgent, after consulting 20 members of good standing.

Members of Agang have told the Mail & Guardian they still do not understand why she failed to comply with the latter requirement.

The party also addressed claims that donors on a recent London trip who give money to both parties pushed the two party leaders to sit down and try to join forces.

Tshabalala said younger members of the party had pushed back against the deal.

"They said we would rather die on our feet then live on our knees so if it means we will lose certain funding than so be it," he said. " We live in a country where the Guptas can land at Waterkloof airbase because funders are running the agenda. And our members stood up and said we would not have it."

Agang members' disapproval
Meanwhile, Ramphele and other leaders of Agang were on a charm offensive against disenchanted members of their party, who took to the party's Facebook page and other mediums last week to express their disapproval of the mood.

"Let us remember the DA has served South Africa with conviction, it has within its ranks many who want only the best for South Africa," said Ramphele. "But although Agang may not have a long history and is a newborn, Agang too has wonderful members across the country, people who have show courage and conviction, wonderful people, people of whom I am very proud."

But the DA revealed in their press statement that Ramphele was the one who insisted on Tuesday's press conference announcing her candidacy, before consulting her members.

Ramphele said the move was necessary to "take control" of media leaks.

"Many of you will remember there were leaks in the media the weekend before that and I thought it was in the interest for both parties and the country to say we are talking about the partnership between the DA and Agang and to say there is this offer on the table and I thought that was perfectly in order," she said.

The announcement sold the partnership as a done deal with Ramphele as the DA's official presidential candidate.

Ramphele said her party would continue doing its work of campaigning and building structures ahead of the elections and emphasised the need to set aside petty party politicking and focus on making South Africa a better place.