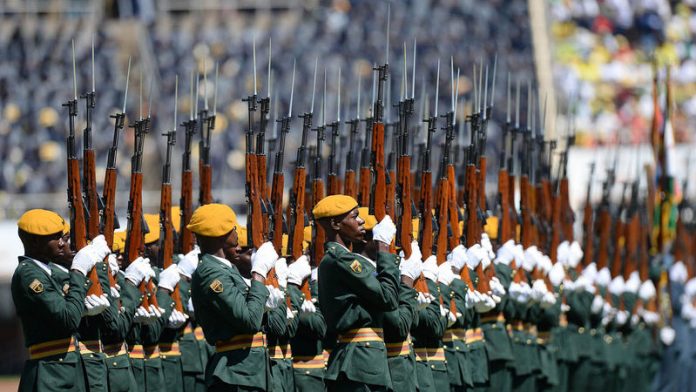 A parliamentary report on defence and home affairs paints a gloomy picture of the precarious financial position of Zimbabwe's defence forces.

Soldiers have not been able to access healthcare because of the army not paying its debts.

The police, too, are battling to settle debts amounting to nearly $145-million to service providers, which has resulted in some services being withdrawn, according to the report.

The report says the ministry of defence was allocated slightly more than $356-million, which amounts to 8.9% of the 2014 national budget.

But despite that, the report says, the army chiefs have dismissed it as grossly inadequate considering the ministry's needs.

Underfunding
For the 2013-2016 period, the report says, the defence ministry's seven priority areas are all under threat because of underfunding.

Those areas are the maintenance of existing defence force equipment and facilities, training, re-equipment, refurbishment and upgrading, research and development, defence projects and food security.

"[The] national army has outstanding medical debts, which have resulted in refusal by some private medical service providers to offer their services to ZNA [Zimbabwe National Army] members due to nonpayments," the report says.

"Your committee also learnt that an average of $50 000 per week is required for medical expenses. The ministry only got $1.75-million out of $2.6-million that was bidded for this item in 2014. This contributed immensely to a decline in health services, which deteriorated very badly as drugs availability ran below critical levels, as evidenced in the previous five years."

A demining exercise has also been seriously underfunded, according to the report, and this year it was allocated only $500 000 despite a request for $2-million.

The report says this will result in it failing to meet the 1999 Ottawa Convention deadlines, which require that all anti-personnel mines in the country be destroyed.

Situation barely manageable
The report says the defence ministry is being hamstrung by 12 696 vacancies out of the ministry's staff approval of 45 944.

The situation in the army is barely manageable, the report says and, had it not been for the humanitarian assistance it gets from the International Committee of the Red Cross, the Norwegian People's Aid and the Halo Trust, a nongovernmental organisation that works in several countries to remove the hazardous debris of war, the situation would have been worse.

The report says the Zimbabwe Republic Police (ZRP) owes $144.9-million for utilities and other services such as rents, although the report says that the treasury is to blame in some cases.

"This has resulted in the name of the ministry being compromised as a bad debtor. Treasury sometimes does not fully release allocations to the ministry as per the budget presentation. This has the effect of overstraining the cash-strapped ministry," the report says.

As part of its recommendations, the parliamentary committee says additional funds must be made available for both the army and the police to perform critical functions.

Police and army chiefs' complaints
But, there are very few chances that this plea will be entertained by the treasury as the government's resources are limited.

Both police and army chiefs have complained about the amounts they were allocated in the 2014 national budget, saying their operations would be crippled.

The government's finances are in a severely limited state following the withdrawal of financial support by Western nations more than a decade ago.

The tax revenue base has also been shrinking as a result of company closures and massive job losses.

But the lack of adequate funding is not unique to the security departments – other arms of government are also feeling the squeeze.