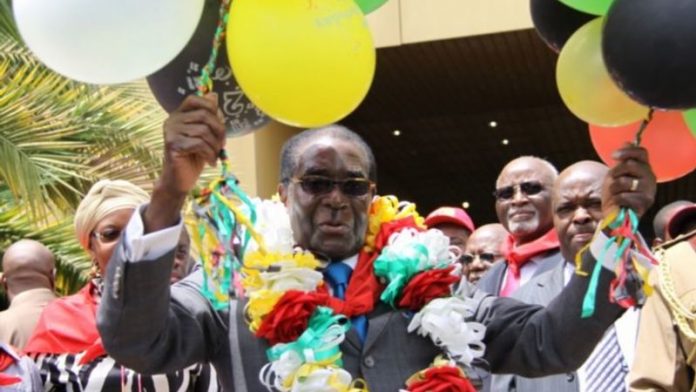 Plans for a lavish $1-million celebration of Zimbabwean president Robert Mugabe's 90th birthday have been condemned as the country lurches towards another financial crisis.

The tribute to Africa's oldest head of state – and second oldest in the world after Israel's Shimon Peres – is expected to surpass last year's party, when special gold coins were minted and Mugabe was presented with a cake said to weigh 89kg.

But the costly event will come amid heavy job losses, slowing economic growth and what the central bank describes as a "severe and persistent liquidity crunch", reviving memories of the disastrous meltdown five years ago.

Mugabe, who continues to defy the march of time and constant health speculation, travelled to Singapore this week for cataract surgery on his left eye, according to his spokesperson.

But he is expected back in time for the birthday celebration with thousands of supporters at the Rudhaka stadium in the town of Marondera on Sunday, two days after he turns 90.

It is a milestone in the history of the country, which has known no other leader since gaining independence from Britain in 1980, but activists and opposition politicians described the event as an extravagant waste of money when many citizens are going hungry.

"It would be inappropriate for a country's head of state to have such a lavish and costly celebration at a time when the country is faced with the disaster of flooding and a crumbling economy," said Dewa Mavhinga, a Zimbabwe researcher at Human Rights Watch. "It's about cultism, hero worship, institutionalising Mugabe, with sycophants around him trying to oil the wheels of patronage. There's an entire system behind this corruption."

Reflecting on Mugabe's 34 years in power, Mavhinga added: "His human rights record is one that no one can honestly admire. There is nothing to celebrate about his birthday or his legacy – and there are concerns that, if something should happen to him, the country might be plunged into chaos if there is no clear mechanism for transition."

Officially, funds for the birthday bash are being raised by the Zanu-PF youth league and not from the public purse. But Tendai Biti, who was finance minister until his party lost heavily to Zanu-PF in disputed elections last year, said: "When I was finance minister we never contributed a cent, but I've absolutely no doubt that they will get money from the treasury this time."

Lay offs
As the economy stumbles back into trouble, long queues are returning to bank branches and companies are laying off around about 300 people a week, according to trade unions.

Biti said: "The economy is going down and we need to do something about it. The government is clueless and has no idea how to manage it. Things are getting worse every day."

David Coltart, the former education minister, noted that the economy was in far worse shape during the hyperinflation of 2008 but Mugabe's supporters organised birthday celebrations even then. "Some people will be appalled by it but they don't seem bothered," he said.

The president regularly travels to Singapore for medical check-ups and, some believe, a mysterious treatment involving blood transfusions. A US diplomatic cable from 2008, leaked three years later by WikiLeaks, quoted Mugabe's close ally and former central bank chief Gideon Gono as telling former US ambassador Christopher Dell that Mugabe had been diagnosed with prostate cancer.

The far east became the destination of choice for Mugabe's medical care after the European Union imposed sanctions on him in 2002. On Monday the EU said it had lifted a visa ban and assets freeze against members of Zimbabwe's ruling elite with the exception of Mugabe and his wife, Grace.

If he serves his full term, Mugabe will be 94 when the next elections are due. At the funeral of his sister Bridget last month, he spoke for more than an hour and mused: "I do not know how I have lived this long. It is all in God's hands."

"I do respect that he's reached 90 years," Coltart said. "I was constantly amazed in Cabinet by his vigour; he was not a doddery, senile man. Against that, the country remains in crisis and the economy is in turmoil. That needs an energetic pair of hands to deal with." – © Guardian News and Media 2014