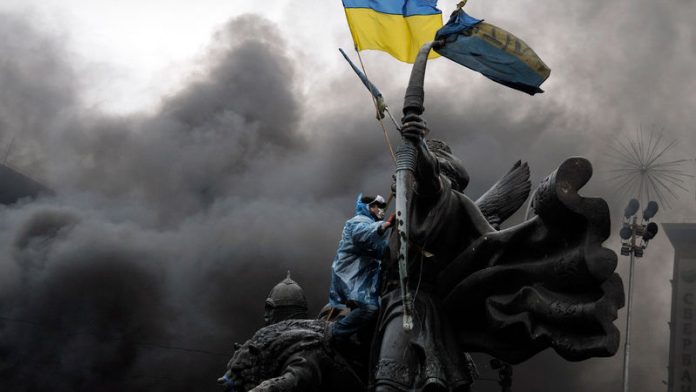 Putin asked the upper house of parliament to approve sending armed forces to the Ukrainian territory, which has a majority ethnic Russian population. But Crimea had already begun to slip from Kiev's control with closure of the main airport and deployment of pro-Russian guards at key buildings.

Russia's upper house of parliament on Saturday approved the proposal by Putin to deploy Russian armed forces in Ukraine's Crimea region. The Federation Council voted overwhelmingly to back a proposal to use "the armed forces of the Russian Federation on the territory of Ukraine until the normalisation of the socio-political situation in that country." It said the decision took effect immediately.

Putin's statement, and remarks from a pro-Russian leader installed in Crimea this week, effectively confirmed what most people in the region had assumed: that military units who had seized control in the past two days were indeed Moscow's. Ukraine accused Russia of sending thousands of extra troops to Crimea, largely hostile to the Kiev government, which emerged from the overthrow of president Viktor Yanukovich last weekend.

It placed its military in the area on high alert. After Yanukovich's overthrow, Crimea quickly became the focus of a crisis bearing perils for the entire region. Ukraine teeters on the brink of economic disaster, mired in debt. Any further spread of separatist sentiment to industrial, Russian-speaking eastern territories could raise the risk of disintegration with serious implications for surrounding states including Russia, Poland and Belarus.

Putin turned to parliament after a day of events viewed with deep concern in Europe and the US. British foreign minister William Hague said he had spoken to Russian counterpart Sergei Lavrov and called for a "de-escalation" of tensions. US President Barack Obama said any Russian intervention in Ukraine would carry costs for Moscow.

The armed Russian presence on the streets aroused mixed feelings. Near the town of Balaclava in Crimea armed Russian-speaking men wearing camouflage, but no markings associating them with the Russian military blockaded a Ukrainian border guard post. They were backed by armoured cars, again unmarked. "I want to live with Russia. I want to join Russia," said Alla Batura, a petite 71-year-old pensioner who has lived in Sevastopol for 50 years. "They are good lads…They are protecting us, so we feel safe."

Inna, 21, a clerk in a nearby store who came out to stare at the APCs was less enthusiastic. "I am in shock. I don't understand what the hell this is… People say they came here to protect us. Who knows? … All of our (Ukrainian) military are probably out at sea by now."

Crimean premier Sergei Aksyonov said servicemen of the Russian Black Sea Fleet, based in Crimea under a lease, had been deployed to guard important buildings. Men in combat uniforms without markings have occupied the regional parliament building since Thursday and seized airfields on Friday.

The main civil airport at the fleet town of Simferopol announced it had closed its airspace. Russia accused Kiev-backed gunmen of attacking the Interior Ministry building and wounding personnel in "treacherous provocation". Language emanating from Moscow was reminiscent of the Cold War when Moscow felt its allied states in eastern Europe under threat from Western intrigue – something the Kremlin has cited in recent weeks as a factor in the crisis.

Putin used the justification of protecting Russian citizens in 2008 when he ordered the invasion of neighbouring Georgia, where Moscow quickly seized two breakaway regions and recognised them as independent. For many Russians, Crimea and its Soviet-era "Hero City" of Sevastopol, besieged by Nazi invaders, has a strong emotional resonance.

For Ukraine, independent of Russia since the collapse of the Soviet Union in 1991, and already facing an economic crisis, its loss would be an enormous blow. Trains were operating normally between Crimea and the Ukrainian hinterland and roads were open, but major sea and air movements appeared to be under Russian control.

Dmitry Trenin of the Moscow Carnegie Center think tank said he did not believe Putin sought to wage war over Crimea. "Russia wants to avoid bloodshed," he told the German Der Spiegel online. "That is why the military is blocking approach ways. That prevents units of the Ukrainian army or police or Ukrainian nationalist volunteers entering Crimea. At the same time, the region would get economic help from Russia."

Ukraine's new leaders, who had pressed a long street campaign against Yanukovich after he rejected a deal with the European Union in favour of closer ties with Russia, appear hard pressed to handle events in Crimea. Interfax quoted the Ukrainian border guard as saying its vessels had been put on combat alert in the Crimea.

"It is unacceptable when armoured Russian military vehicles are out in the centre of Ukrainian towns," Ukrainian Prime Minister Arseny Yatseniuk said at the start of a government meeting in Kiev. "We do not give in to provocative actions, we do not use force and we demand that Russia stop its provocative actions and return the troops to base." – Reuters