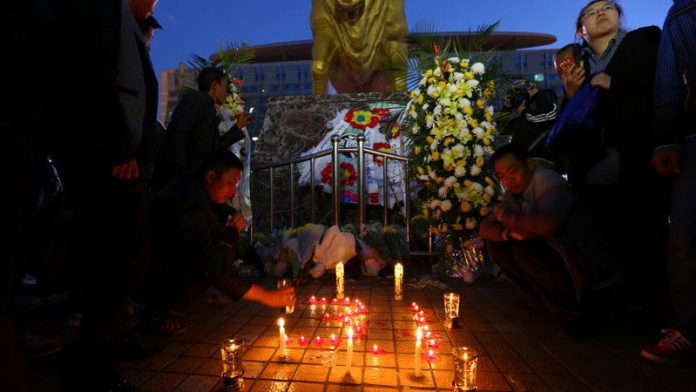 Police swept a Muslim Uighur district of the Chinese city of Kunming hours after knife-wielding assailants killed 29 people in a crowded station, underscoring the risk of ethnic tension spilling over from the remote Xinjiang region.

China has vowed to crack down on what it says are militants bent on transforming Xinjiang into an independent state called East Turkestan, but it has emphasised ethnic unity after what it described as a terrorist attack on Saturday.

Xinjiang, in China's far west, is home to the Uighur people, many of whom say they chafe at Chinese restrictions on their culture and religion.

In Kunming, capital of the southwestern province of Yunnan, many hundreds of miles from Xinjiang, members of the small Uighur community said they felt they were under suspicion.

"I alone have already been checked three times. The police point their guns at us. We don't know what really happened," said Uighur restaurant worker Aniwar Wuppur.

Interrogations
Residents of Kunming's Dashuyin district, where many Uighurs live, said police came through the neighbourhood hours after the attack, rounding up dozens of people for questioning.

Several Uighur men said they had been interrogated for hours but not harmed.

One family from Xinjiang, grilling skewers of mutton over charcoal at a streetside stall, said police had stormed into their home pointing guns.

"It's very tense now. You can feel it," said the 24-year-old man running the stall, who declined to be identified. "Even though people don't say or do anything, they're staring at us all the time."

Saturday's violence was the first major attack blamed on people from Xinjiang at such a great distance from the region since October, when a car ploughed into tourists in Beijing's Tiananmen Square, killing the three people in the vehicle and two bystanders.

The East Turkestan Islamic Movement (ETIM), which claimed responsibility for the Tiananmen incident, is a major separatist force, according to the official Xinhua news agency. The UN Security Council lists the ETIM as a terrorist group.

Before these two incidents, violence had been confined largely to Xinjiang, which borders former Soviet Central Asia, Afghanistan, Pakistan and India, where more than 100 people have been killed in the past year.

Chinese media criticised foreign news organisations for their coverage of the Kunming attack, saying they glossed over the danger of extremism in China by instead finding fault with government policies for spurring dissent.

Shocking visuals
With shocking images of slashed victims on the internet, the high death toll and the distance from Xinjiang, the Kunming attack will provide a ready example for government leaders who stress the growing threat they say China faces.

Experts say militant ideology does in part fuel the violence, but the level of organisation has long been disputed.

"It certainly is the case that there is continued dispute of what exactly is the nature of the physical or armed conflict between separatist forces and the Chinese state," said Barry Sautman, a political scientist at the Hong Kong University of Science and Technology.

"This may change some minds about the existence of terrorist organisations in China."

Xinhua said a "terrorist gang of eight members", with a leader identified as Abdurehim Kurban, was responsible for the attack.

Suspects
State television said earlier that a female suspect was wounded and captured in the attack. Xinhua reported on Monday that three suspects, including another woman, had been caught. Four were shot dead.

"My impression is that ethnic polarisation is the driver behind this, not only religion," said Nicholas Bequelin, a senior researcher at Human Rights Watch.

"Religion is the vehicle, the ready-made ideology that allows some people to embark on plans that are inhuman and brutal."

Zhu Weiqun, chairperson of the ethnic and religious affairs committee of the top advisory body to Parliament, which meets this week in Beijing, told the Communist Party mouthpiece, the People's Daily, that such violence should not be linked to specific ethnic groups.

"If we end up taking our anger about this incident out on a particular ethnic group and equate one ethnic group with violent terrorism then that is completely incorrect, this is exactly what the separatists want," Zhu said.

No reprisals
There have been no signs of reprisals against Uighurs in Kunming, but some Han Chinese residents have voiced their anger.

"They should just send them all back, and not let them come to Kunming anymore," said Yang Jing at her sewing shop across the street from a Uighur restaurant. "They're hateful."

Others said the attack would change attitudes.

"You can't blame all Xinjiang people for this," said Li Baochang, passing through the Dashuyin district. "But suspicions are growing and sometimes, even if we don't want to, the feelings in our hearts have changed." – Reuters