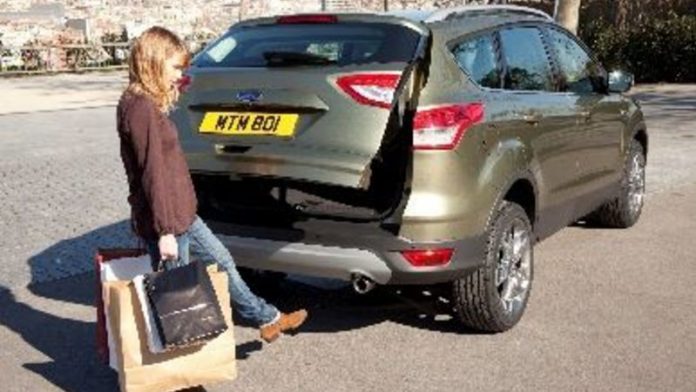 It's 4pm on a Friday afternoon and there’s bumper-to-bumper rush-hour traffic on the N3 highway leaving Johannesburg. A problem, since you’re on your way to Durban for a holiday weekend. This frustration is the last thing you need. Thankfully your car is equipped for just this eventuality. It has air conditioning that automatically adjusts itself to keep a comfortable temperature.

The stereo system doesn’t just have steering wheel controls to help you keep your eyes on the road, it also has voice activation to let you recite names and phone numbers, or even song names, controlling the smartphone tethered through USB.

Gear changes are handled by a sophisticated dual-clutch automatic transmission, keeping your clutch foot from cramping up.

There’s also an active traffic stop system. With this, you won’t have to worry about hitting the car in front of you as you sing along to Greatest Road Trip Hits Volume 3. The system monitors your inputs as well as your on-road surroundings. If the car in front of you comes to a stop, but you don’t react, your car will. A flashing light and warning beep at first, followed by an modest application of the brakes to really get your attention — and prevent your weekend from starting with, well, an unwelcome bang.

As the traffic clears up you set your cruise control to 120km/h, and make the right-hand lane your home for the next 500km or so. Approaching Heidelberg you run into another inevitable road trip annoyance: a truck pulling out into your lane, doing only 80km an hour.

Without panic or alarm bells your car simply slows down, matching the speed of the lumbering, smoking horse-and-trailer ahead of you. The active cruise-control system has radar sensors that scan the road ahead, and it’s keeping a safe distance between you and the wheezy 18-wheeler. With its overtaking manoeuvre complete the truck moves back into its lane.

A few seconds later your car takes control of the automatic gearbox, changes down a few gears, and accelerates back up to the preset 120km/h – all with nary an input from your feet at the pedals.

Keeping you safe at night

An hour later, as the sun kisses the horizon goodnight and twilight starts playing tricks on your eyes, you lose sight of the road markings. The road curves to the left and the steering wheel buzzes gently, a reminder that you’re straying over the white line that denotes your lane. You smile, because your car’s systems will keep you in your lane with a gentle tug on the power steering.

It’s also around this time that the car senses the lack of natural light and turns on its headlights. Since there is nearly no traffic on the road, it chooses high beams — but it will dim the lights by itself when there are oncoming cars. Nearing Pietermaritzburg’s twisty hills the onset of fatigue becomes a reality.

A coffee cup warning light illuminates on your dashboard. The accompanying message on the information display lets you know that you’ve been driving for a while and look a little tired. Perhaps a caffeine break is in order. Pulling up in the petrol station’s forecourt, the chiming sensors guide you into a parking bay. You get out and walk to the convenience shop.

Locking cars? That’s so 90s. The car simply locks itself once you’re about 10 metres away. Walking back to the car, you remember there’s something you need in the boot. A simple wave of your foot under the rear bumper and the boot opens automatically. Back on the road you remember that these are Kwazulu-Natal’s strict, zero-tolerance speed zones, and you have to be vigilant about any changes in the speed limit.

Wondercar over here once again has the tech to save the day: a heads-up display on the dashboard, similar to that on a fighter jet, displays the current speed limit using a digital representation of the 100km/h sign. So long, speeding fines. At around 11pm you finally arrive at your destination. Don’t worry about locking the car. Once you’re out of range it’ll switch off the interior lights, tuck away its mirrors, and let you get on with your human things.

Not at all futuristic

The journey and, more importantly, the car described here are not futuristic flights of fancy. Five years ago most of the above was easily possible, as long as the car you parked in your garage was one of a select few high-end luxury sedans. Long the domain of the Mercedes Benz S-class, BMW 7-series, Audi A8, and left-field Lexus LS, the high-tech gadgetry described here has trickled down to more mainstream models.

Indeed, you can get radar-based cruise control on a BMW 3-series, Mercedes C-class, and Audi A4. In those, too, you’ll get all of the above, but that doesn’t mean regular, non-luxury cars are left wanting, though. Despite the sales success and popularity of those three German saloons, they’re still not the cars the majority of South Africans end up buying.

If regular road-tripping Nkosis want to get in on the action they also have a veritable ton of options available to them. A car that stops itself in city traffic, avoiding accidents? Say hello to Volvo’s sensible V40. A foot-wave-activated tailgate? Ford’s curiously-named Kuga does that. A heads-up display to make you feel like you’re driving something from the future? The upcoming Mazda 3 hatch will offer that. Voice control that lets you dictate phone numbers, and even reads your text messages to you? The chic and cheeky Fiat 500 has that as standard.

Sadly, it is the case that some of this technology has been offered as optional extras in certain cases. Volkswagen’s Passat has had a plethora of high-end options on offer, including radar-based cruise control, satellite navigation, climate control, and more — as long as you were willing to take a pen to the options list and give it more ticks than an A+ exam paper.

The end result was that the car would cost a lot more than the list price, and that defeats the point. Cars on sale now offer these technologies as standard. When the current Ford Fiesta and Fiat 500 first arrived on the scene in 2008, they offered voice control as standard. Fiat’s system, Blue & Me, was developed in conjunction with Microsoft.

It features a USB port that’ll read music files on your phone, and voice commands that let you access certain functions in the car. Ford’s system didn’t have a name at the time, but it was smart enough to understand natural language commands, such as “double 5” as well as interpreting “oh” and “zero” as the same thing, when users recite phone numbers.

Both of those are popular, mainstream models. And they offered technology that was a costly option on cars from Germans. Not to take away from BMW, et al — they did help develop these things, driving down the cost of technology.

Nowadays it’s cheap enough to include in an increasing number of cars. Don’t expect a fully kitted-out Corolla, just yet. Given the seven-year development cycle for cars, it takes a while for these technologies to finally make a public appearance. If a manufacturer started working on an all-new car today, seven years from now it would release a car with today’s technologies.

And just think of what kind of tech trickery will be on offer then. It’s a tricky balance: offering just the right amount of stuff that won’t be too outdated, while also keeping costs down. Today, most entry-level cars will have at least a USB port.

Charging our phones and pumping our tunes through the radio are commonplace. Manufacturers that have tiered specification levels will likely include Bluetooth (with the aforementioned voice commands, in some cases) in the next level up, and the range-topping models will have a few more in-car toys.

Parking sensors can be had on a growing number of cars, now, but manufacturers are stepping it up with parking systems. These will detect open parking spots as you drive along in a parking lot, then prompt to help you park in that tight bay.

They completely take over acceleration and steering, backing you in to a parallel spot or alley docking into perpendicular ones. This was first demonstrated on Lexus’ R1-million LS460, in 2008. Today you can have it in a Volkswagen Golf and by the end of the year it’ll be in the revised Ford Focus. The same parking sensors that prevent you from hitting pot plants can also be used on the highway to let you know that there’s a car in your blind spot.

In cars where this is implemented there is usually an orange warning light in the side mirror. Safety aids such as lane departure warning, lane-keep assist, and automatic headlight control rely on expensive cameras mounted in a cluster near the rear-view mirror. These aren’t standard fit, just yet, but offered as options by certain manufacturers.

BMW and Mercedes Benz now offer almost every flagship technology from their large limos in the 3-series and C-class, respectively. But the more accessible BMW 1-series and Mercedes Benz A-class can also get in on the action. And it’s only a matter of time before the mainstream equivalents of those premium hatches will also be packed with things that just make life that little easier.

An uplift for the Eighth District

Budapest’s Eighth District is shaking off its sleazy reputation with cafes, clubs and art spaces opening up in an area laden with faded grandeur.
Read more
Special Reports

Going GoPro in a midlife crisis

I’ve started buying expensive toys before i actually need them. Should I go for it and start to wear leather trousers and a ponytail?
Read more
Special Reports

A guide to treating your vegan guests

If you’re a vegan marrying into a bunch of carnivores, there’s probably not much we can do for you except wish you lots of luck and infinite patience.
Read more
Special Reports

A letter from… London

A South African fashionista doing a master’s degree in fashion marketing in the UK shares her experience as a person with an eye for design in London.
Read more
Special Reports

An autumn view of Africa

Open gardens, botanical vistas, cycling tours and picnic perfect parks; we have it all in South Africa, many of them not far from your front door.
Read more
Special Reports

Maria Westerståhl chose Funäsfjällen ski area as an antidote to crowded resorts, but finds its downhill as enticing as its cross-country trails.
Read more
Advertising