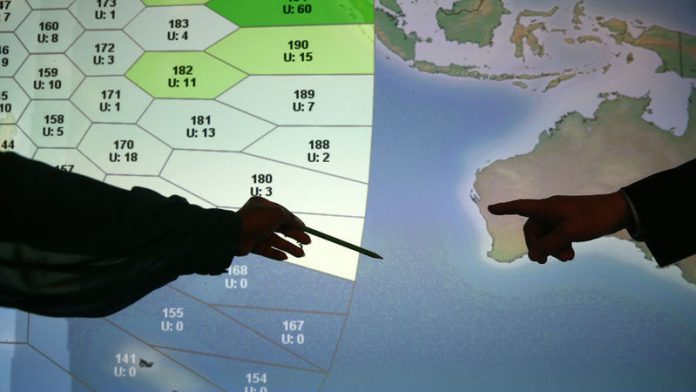 Malaysia Airlines and Boeing are facing a potential lawsuit over the Beijing-bound aeroplane that disappeared more than two weeks ago with 239 people on board, according to a law firm representing the families of the passengers on board flight MH370.

A petition for discovery has been filed against aircraft manufacturer Boeing and operator Malaysian Airlines, said Chicago-based firm Ribbeck Law on Tuesday.

The petition was filed in the Cook County, Illinois Circuit Court to secure evidence of possible design and manufacturing defects that may have contributed to the disaster, the law firm said. The court filing was not immediately available. But it initiates a multimillion-dollar lawsuit against the airline and Boeing by the passengers' families, the firm said.

"We believe that both defendants named are responsible for the disaster of flight MH370," said lead lawyer Monica Kelly.

The petition was filed on behalf of Januari Siregar, whose son was on the flight. Additional pleadings will be filed in the next few days against other potential defendants that designed or manufactured component parts of the aircraft that may have failed, Kelly said.

Ribbeck's petition asks the judge to order Boeing to provide the identity of manufacturers of various plane components, including electric components and wiring, batteries, emergency oxygen and fire alarm systems. It is seeking the identity of the company or person who last inspected the fuselage and who provided maintenance.

Ribbeck is asking that US scientists be included in the search for wreckage and bodies, the firm said.

Ribbeck is also representing 115 passengers in the crash of Asiana Airlines Flight 214 in San Francisco in July.

Search resumes
The search for debris from the missing jet resumed on Wednesday in the southern Indian Ocean after bad weather forced authorities to suspend the search on Tuesday.

A dozen aircraft from Australia, the US, China, Japan and South Korea are scouring the seas about 2 500 km southwest of Perth in Australia for potential debris, in a bid to unlock the mystery of why the plane ended up in frigid seas thousands of miles off course.

Officials narrowed the search zone sharply based on the last satellite signals received from the Boeing 777, but it was still estimated at 1.6-million square kilometres, an area bigger than the US states of Texas and Oklahoma combined.

"We're not searching for a needle in a haystack – we're still trying to define where the haystack is," said Australian deputy defence chief Air Marshal Mark Binskin on Tuesday at a military base in Perth.

The Australian Maritime Safety Authority, which is co-ordinating the search on Malaysia's behalf, said Wednesday's search will focus on 80 000 square kilometres.

"This is about the most inaccessible spot imaginable. It's thousands of kilometers from anywhere, but nevertheless, we are the closest nation. We are a capable nation. We will do what we can to solve this riddle," Australian Prime Minister Tony Abbott told Seven Network television on Wednesday.

Little doubt
Malaysian Prime Minister Najib Razak this week confirmed that the plane had disappeared in this area, based on the findings of British company Inmarsat, which said there was no doubt the Boeing 777 came down in one of the most remote places on Earth. Razak's announcement was an implicit admission that all 239 people on board had died.

"We keep searching until there is absolutely no hope of finding anything," Abbott told Australia's Nine Network television. "Plainly, there is quite a bit of debris in this part of the southern Indian Ocean. We've photographed it on a number of occasions now."

Satellite images and spotter planes have revealed numerous floating objects in the search zone, but none have been positively identified as coming from the missing jet.

Inmarsat's finding does not answer questions about why the plane was so far off course and the recovery of wreckage could unlock clues that answer these questions. Theories range from a hijacking to sabotage or a possible suicide by one of the pilots, but investigators have not ruled out technical problems. The other communication systems on the jetliner shut down for unknown reasons shortly after take-off.

An Australian navy ship is returning to the area after being driven away by gale force winds and 20m waves on Tuesday. A Chinese icebreaker and other Chinese navy vessels are steaming towards the search zone.

Distraught relatives
Dozens of distraught relatives and supporters wearing white T-shirts printed with the words "Let's pray for MH370" clashed with police in Beijing on Tuesday while marching to the Malaysian Embassy. They threw plastic water bottles, rushed the gate and chanted "Liars!". The marchers held banners and shouted: "Tell the truth! Return our relatives!" They have accused Malaysia of "delays and deception" in the search and investigation.

The relatives demanded to see the Malaysian ambassador and met with him later in the day.

In a statement of support for the families, Chinese President Xi Jinping ordered a special envoy, vice foreign minister Zhang Yesui, to Kuala Lumpur to deal with the case. Deputy Foreign Minister Xie Hangsheng told Malaysia's ambassador that China wanted to know what led Razak to announce that the plane had been lost, according to the ministry's website. Malaysia Airlines chairperson Mohammed Nor Mohammed Yusof said the conclusion was based on "the evidence given to us, and by rational deduction".

Malaysia's confused initial response to the plane's disappearance and a perception of poor communication and lack of reliable information enraged relatives of the more than 150 Chinese passengers and has strained ties between Beijing and Kuala Lumpur.

China has demanded that Malaysia turn over the Inmarsat satellite data used to determine the plane's fate.

Mohammed Nor has said it may take time for further answers to become clear. "The investigation still under way may yet prove to be even longer and more complex than it has been since March 8," he said.

Unknown topography
The search for the wreckage and the plane's black box could take years as the ocean is 7 000m deep in some parts.

David Ferreira, an oceanographer at the University of Reading in Britain, said little is known about the detailed topography of the seabed where the plane is believed to have crashed.

"We know much more about the surface of the moon than we do about the ocean floor in that part of the Indian Ocean … Searching for a needle in a haystack would be simple by comparison," he said. "This haystack is in the dark, two or three miles underwater, hundreds of miles from land and in a field no one has even seen before, let alone mapped."

The satellite information does not provide an exact location, only a rough estimate of where the jet went down.

The US was sending an undersea navy drone to Australia, in addition to a high-tech black box detector, to help in the search.

Black boxes record data and voices in the cockpit during flights, but their locator beacons stop emitting about a month after a crash because of limited battery life. The search for flight MH370 has been under way for 18 days now and time is running out.

The US state department said it was co-operating with Malaysia and working to verify the data from Inmarsat and the Kuala Lumpur government about the course of the US-made plane.

"Basically, we are going back and looking at how they got to where they got to and seeing if our math experts and folks can get to the same place as well," said state department spokesperson Marie Harf.

Malaysian Defence Minister Hishammuddin Hussein said the data is still being analysed "to attempt to determine the final position of the aircraft" and that an international working group of satellite and aircraft performance experts had been set up.

Multinational investigation
The air crash investigation is shaping up to be one of the most costly and difficult ever undertaken. Normally, an official investigation can only begin once a crash site has been identified. That would give Malaysia the power to co-ordinate the investigation and sift through the evidence.

A government source said Malaysia would lead the investigation, but hoped other countries, especially Australia, would play a major role.

There are 26 countries overall involved in the search and Hishammuddin said the problems are not diplomatic, "but technical and logistical".

"We've got to get lucky," said John Goglia, a former member of the US National Transportation Safety Board. "It's a race to get to the area in time to catch the black box pinger while it's still working." – Reuters, additional reporting by Scott McDonald and Eileen Ng, Sapa