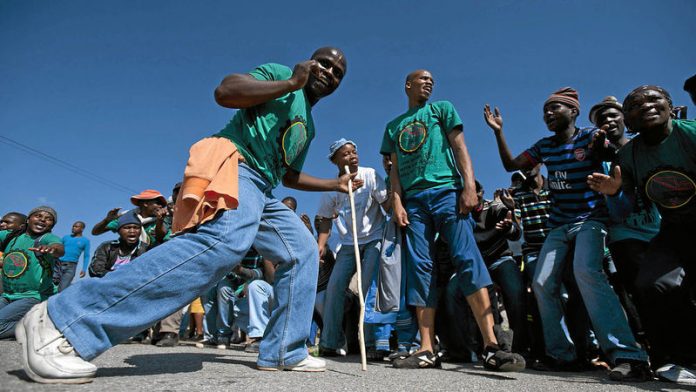 The wage strike in the platinum sector is the longest strike in the industry's history as it enters into its 10th week. All the while, workers are going hungry and platinum stock piles are dwindling but attitudes remain hardened as employers and labour fail to come back to the negotiating table. One thing however is clear: the breaking point is fast approaching.

As business and labour fail to see eye to eye, what is apparent is that at only one of the parties will emerge from this duel alive.

The union leading the strike, the Association of Mineworkers and Construction Union (Amcu), last week told the Mail & Guardian it has plans to intensify the strike, the details of which "one would not necessarily discuss with the media". While the companies could also have some tricks up their sleeve.

Negotiations crumbled on March 5 with no significant movement from either party since. Amcu has since organised a number of marches and issued memorandums to two of the three platinum producers so far demanding they revise their offer or come back to the negotiating table. The union also approached National Economic Development and Labour Council for permission to extend the strike to the gold and coal sectors but this was rejected on Thursday last week.

The companies have taken to appealing to the workers and, possibly no longer relying on the union to do so, has published written explanations of what the current offer is and what the average employee will receive in terms of money and benefits.

'Panic mode'
"I've got a feeling that very soon the employers will lose patience and implement extreme measures to break the strike," said Gideon Du Plessis, the general secretary of trade union Solidarity, whose non-striking members are also suffering financially from the protracted strike.

There are two power play options break the strike, Du Plessis said.  "They can grant an increase to non-striking workers dating back to October. Then only Amcu workers will suffer from a no-work, no-pay policy. The other option they have is to commence with a massive retrenchment process as a result of strike," he said. "Amcu are showing all signs they are going into panic mode, their members will force them to accept the offer."

If that should happen, workers would be very disgruntled having to strike for two months only to receive the same increase that was on the table two months ago, Du Plessis said. Solidarity estimates that, should the parties settle soon, it will take between 15 and 22 years for the employees to recover what they have already lost in wages – estimated by the employers as R4.8-billion to date

Should the mining companies grant a high increase, which they have been saying they cannot afford, their days of operation will be numbered.

On their websites, the companies have published correspondence with employees who have expressed the desire to return to work. "We want back to work, we are tired about this rubbish they are playing I don't want to lose my job because of this," said one message directed at the company. "We just want the strike to end and go back to work. Our kids are starving," said another. Other messages indicate most workers no longer support the strike and are prepared to take the wage offer.

Still willing to strike
Amcu treasurer Jimmy Gama however said there is still a mandate from union members to strike.

"Our members have always been strong and are wanting to continue the strike. I don't know who those workers are that they [the companies] are referring to, they might be non-unionised workers," Gama said. "Our members … want to continue. We are meeting and consulting with them on a daily basis."

Although this strike is longer than ever experienced before – with wage and revenue losses amounting to over R15-billion to date – this time around (as opposed to the unrest in the mining sector in 2012), the metal price has barely reacted to the developments and the prices of stocks of the biggest platinum producers remain stable.

There are some differences in this strike compared to the last in 2012, which went on for two months and claimed 44 lives.

Firstly, this labour action is protected and not a wildcat strike like in 2010. As a result, the level of violence and aggression is notably lower and far fewer lives have been lost.

This time, companies prepared for protracted strike and some stockpiled metal to secure supply for up to eight weeks. Also, it's not the entire platinum belt that is striking, and Anglo American Platinum(Amplats) and Impala platinum still have active operations in the east of the platinum belt in South Africa where Amcu does not have majority status and in Zimbabwe.

A mining analyst at Cadiz Corporate Solutions, Peter Major, said it was indeed a mystery as to why the price has not shot up but that most research is indicating the price is going to start going up pretty quick.

He said platinum exchange traded funds where investors could purchase notes, which are fully backed up by physical platinum bullion, were holding a great deal of value that had never been seen before. Also companies had stockpiles and other product in the pipeline allowed for continued operation for now.

"There is definitely going to be a hit [in demand] here pretty quick. And the strike will still continue probably until the election," said Major.

"Metal prices will not start to run away as there is enough metal available in the open market to continue satisfying global industrial need for some time in our view," said Johan Theron, group executive for corporate relations at Impala.

In the previous strike, platinum companies also saw their shares lose value rapidly until settlement was reached – but not so this time round.

"Amplats are in bigger trouble than the other guys, it really has marginal shafts … It [the share price] doesn't make any sense at all," Major said, noting the strengthening rand should also have a negative impact on the shares of mining companies.

According to Bloomberg, Amplats chief executive Chris Griffith, said the company had production to continue supplying customers for a "good while longer" and could also supply customers through other means like "buying in volume" should it need to.

Theron said it is important to understand that when Impala runs out of metal, its fundamental bargaining position will not change as it is not informed by its ability to sell metal our its stockpile. "Our position is principally determined by much more fundamental and longer term strategic considerations, namely the profitability and sustainability of our business and the risk of large scale job losses with all the associated consequences."