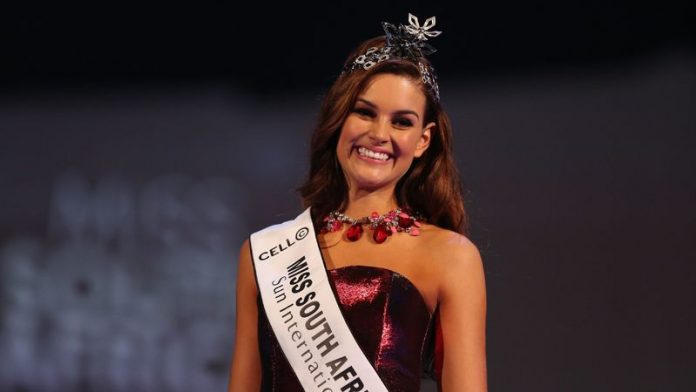 The 21-year-old who hails from Volksrust in Mpumalanga but currently lives in Bloemfontein was one of the favourite contenders in the pageant.

In her acceptance speech, Strauss said: "Oh, how I love South Africa! I can live, speak, learn and love freely. My dreams are developed and become reality here. Our country is my pride and my purpose has and will always lie within it."

Strauss won money, a car and products valued at more than R1.3-million. She also gets thousands of rands in cash and study bursaries to award to South Africans that she meets during her reign. Cellular company Cell C is also giving her access to R200 000 to spend on random acts of kindness.

Ziphozakhe Zokufa from the Eastern Cape came in as first princess and Matlala Mokoko from Limpopo second princess.

The modern platinum crown named Palesa (flower in Sesotho) was designed from platinum by the Jack Friedman team as well as pageant designer Malcolm Kluk using inspiration taken from the natural beauty of indigenous South African flowers and traditional patterns.

Palesa was created to match the new look and revamped Miss SA pageant.

Tough questions
The top five contestants – Zokufa, Anzel Stofberg, Rolene Strauss, Tidimalo Sehlako and Mokoko – were asked questions by the panel of judges.  Strauss was asked her thoughts on negative reactions towards the swimsuit component of beauty pageants by magazine editor and judge Kojo Baffoe to which she answered: “As women we are comfortable in our skin and proud of ourselves therefore we don’t have to shy away from being proud of our bodies. We are African women. Be comfortable in your own skin.”

Ziphozakhe Zokufa, Rolene Strauss and Abigail De Jager were favourites on Twitter and trended along with Melinda Bam during the broadcast which was live on Mzansi Magic and hosted by Elana Afrika-Bredenkamp.

Guests and viewers at home were entertained with performances by Mi Casa, Matthew Mole and Bucie.

The judging panel was made up of Anele Mdoda, Kojo Baffoe, Bonang Matheba, Amy Kleinhans-Curd and Pnina Fenster.

Inspired by Professor Jansen
Earlier during the competition when asked why Strauss wants to be Miss SA and what she thinks she would be able to bring to the role she said: "When someone says 'South Africa' I get goose bumps. I have this fire of passion burning inside of me for our country. The opportunities I have received have made me who I am today and I’ve realised that there is so much to give; to our country and our people.”

Strauss says she finds inspiration from Professor Jonathan Jansen, the rector of the University of the Free State where she is a student. "He is not afraid to stand for what he believes in, he loves what he does and gives of himself to his students. I can testify that he wants the best for his students and supports them in all they do. We can all learn from Professor Jansen. Love what you do, stay humble and let the light shine on others."

Pretoria beauty Marilyn Ramos has been wearing the crown since 2012 and has enjoyed one of the longest reigns in the history of Miss SA.

Last year Sun International, the owners of the beauty pageant, said that the decision came as part of an extensive makeover for the beauty title.

“It made huge sense to move the pageant from December to March. It allows the title holder to compete internationally at the Miss World and Miss Universe pageants, which are typically held during the last two months in the year of their reign,” said Sue Klerck of Sun International.

“Also in previous years, our current title holder has been away competing internationally and was unable to attend the pageant to hand over the crown to the new Miss South Africa.”

The 2011 runner-up Remona Moodley handed over the filigree silver and Swarovski crystal crown to Ramos in December 2012 when Melinda Bam, Miss South Africa 2011, was in the US to compete in the Miss Universe finals.

Bam is currently the National Executive of Miss South Africa Pty Ltd, making her part of the organising team.