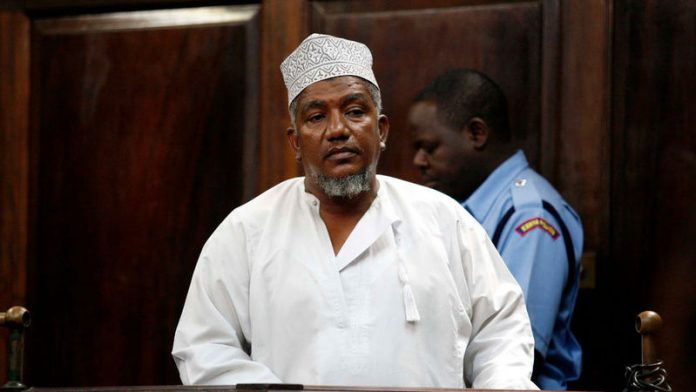 On the evening of April 1 a black car slowed down in front of the law courts at Shanzu, some 15km north of Kenya's coastal tourist city of Mombasa. Its occupants in the still-moving car emptied their guns at a party of five men who were walking just outside the courtyard.

Once the dust and screams cleared, radical Muslim preacher Abubakar Shariff Ahmed lay dead in a pool of blood, felled by bullets to his head and torso. His 20-year companion was also killed, while the other three survived.

In truth, few Kenyans bar his supporters will admit to a sense of schadenfraude at the demise of the former grave-digger known as Makaburi (Kiswahili for grave). The fiery cleric had been a hugely divisive figure, especially after media interviews in which he said the Westgate mall terrorist attack in Nairobi last September was justified.

He was avowedly pro-al-Shabab, the al-Qaeda-allied Somalia insurgent group that claimed responsibility for the Westgate horror that left 67 dead and which is fighting to topple the fledgling Mogadishu government.

The United Nations Security Council in August 2012 put him on a sanctions list including an assets freeze and a travel ban following a report that identified him as "a leading facilitator and recruiter of young Kenyan Muslims for violent militant activity in Somalia."

Essentially, Shariff was a dead man walking and he foretold his death. "I will be killed anytime and would be happy to die as a martyr. I am the only remaining one [yet] to die like Sheikh Aboud Rogo. People have been asking why it is not happening to me," he once told a reporter.

Unexplained deaths
Shariff’s killing was the latest instalment in a series of unexplained deaths that have befallen prominent Muslim clerics claimed to be radicalising youths in Mombasa, where the majority of Kenya’s Muslims live, as the East African country wages a war on terror.

In August 2012, Sheikh Aboud Rogo Mohammed was gunned down in another drive-by shooting on a lonely stretch of road as he drove his wife and two daughters to hospital, leading to riots in the city.

Authorities claim the Musa mosque is a recruitment and indoctrination centre for al-Shabab fighters. In February, Kenyan security forces stormed the mosque to scuttle what they said was a "jihadist convention" underway. A flag of the militant Somali movement al-Shabab was raised as scores of youths were rounded up in the operation that saw two policemen stabbed.

Shariff termed the police action "illegal", arguing that no one would recruit in the open at a mosque full of undercover policemen.

Makaburi is long buried, interred at midnight barely five hours after his shooting in his bloodstained clothing in what supporters said was signified martyrdom. However, his shooting threatens to further inflame religious tensions in a country whose faiths have for decades co-existed harmoniously.

Messages to maintain calm were broadcast on radios overnight, while imams also kept up the refrain. The city has so far been calm, but many fear this belies the growing tensions in Mombasa.

Shariff’s killing came a week after attackers shot dead six worshippers at a church in Mombasa’s Likoni area. A few days earlier a vehicle laden with pipe bombs and grenades had been intercepted reportedly on its way to a suicide mission.

Its target was said by investigators to have been a ferry that thousands of locals use to cross the Likoni water channel every morning.  A day before the cleric’s death six people had been killed in grenade attacks on two eateries in the Nairobi suburb of Eastleigh, which is predominantly populated by Somalis.

Fledgling government
Following heavy criticism over the rising insecurity, there is concern that the country’s year-old government, desperate to be seen as in control, has now resorted to extra-judicial measures.

"We demand justice for the victims," Mombasa Senator and former rights activist Omar Hassan said on Wednesday while speaking in the country’s upper house. "Speedy investigations into these unresolved murders must be done," he said, while also appealing for calm in this "trying time."

The country’s tranquillity is being sorely tested, although the terror attacks have so far failed to spark major religious clashes.

However, Muslims are increasingly being profiled by both civilians and security forces. "The systematic profiling of Muslim youths must end," Mr Joho, a Muslim, said.

Further alarm is stoked by conflicting messages about a shoot-to-kill order in the region allegedly issued by one of their own.

Following a spate of crossborder attacks claimed by the Shabab, Kenya in October 2011 sent its military into Somalia. Kenya, whose forces have since rehatted under the African Union’s Mission in Somalia (Amisom), maintains it will only leave once the terror group has been neutralised.

The insurgents and their supporters have used the Kenyan presence in Somali to justify current terror attacks.

Analysts say the brutal crackdown may instead aid terrorism, which has become a key security challenge for the nation of 41-million since a 1998 terrorist attack on the US embassy in the capital Nairobi left over 200 dead.

"These kind of killings are not helping. They are only fanning hatred and resistance. Government should find ways of stopping the reckless killings," Sheikh Mohammad Dor, chair of the Council of Imams and Preachers of Kenya, said Wednesday.

Top officials are now talking of bringing new legislation for a unified unit to tackle terror in a tacit admission that current institutions are struggling to cope.

Many argue that the Kenyan government should instead look at the factors that have made the terrorism message so appealing to youths.

"Our advice to the government is that you shall not use guns, the use of a gun shall not solve that problem. You cannot fight an ideology with the gun. You can win this war only through discussion, awareness," Sheikh Ngao M Ngao Juma, the chairperson of the Kenya Muslims National Advisory Council, told news agency Agence France-Press.

Discontent
The coastal region struggles with poverty and has seen its leaders claim historical injustices when it comes to allocation of resources, despite being home to a bustling tourism industry that is now under threat, and a port that serves the hinterland of Uganda, Rwanda, Burundi, South Sudan and the Democratic Republic of Congo.

Radical preachers easily tap into discontent at the lack of jobs, with al-Shabab recruits said to be on better wages than they would make back home

However, there is a new argument that the attacks are coming from youths wrongly indoctrinated on the virtues of jihad. Shariff’s brand of ideology has been criticised as corrupt, with a danger that it could become mainstream.

As such, his death will only disrupt his network, but his extremist preachings will outlast him. Sheikh Ngao is on record saying that the word "jihad" means "striving", and of the over 30 shades of interpretation only one calls for a rise to arms.

It is a message that has so far fallen on deaf ears for recruits and their masters, who see the al-Shabab brand as the "real" Islam, portending more ill for Kenya's inter-religious harmony.