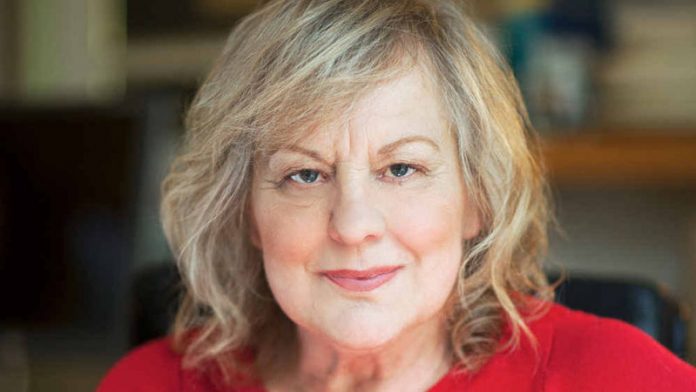 The author Sue Townsend, whose most popular character Adrian Mole defined a generation, has died at the age of 68.

She was best known for the fictional diaries of Adrian Mole, who began confiding his deepest desires and ambitions in the Secret Diary of Adrian Mole 13 3/4 in 1982. His teenage years were recounted in the Growing Pains of Adrian Mole and further novels dealt with married life and middle age.

Townsend died on Thursday evening after a stroke. As the news of Townsend's death broke, tributes were paid to the writer on Twitter.

Stephen Mangan, the actor who played Adrian Mole in a TV adaptation of  the books, tweeted: "Greatly upset to hear that Sue Townsend has died. One of the warmest, funniest and wisest people I ever met.”

The writer Caitlin Moran wrote: "One of the funniest women who ever lived."

Sarah Millican, stand-up comedian and TV panellist, wrote: "Such sad news about Sue Townsend. Just about to start reading The Woman Who Went to Bed for a Year. Will do so now with a heavier heart."

Tom Weldon, chief executive of Penguin Random House UK, her publisher said she will be remembered as "one in a handful of this country's great comic writers".

"She was loved by generations of readers, not only because she made them laugh out loud, but because her view of the world, its inhabitants and their frailties was so generous, life affirming and unique," he said.

The character of Mole – which made Townsend a bestselling novelist – is an average teenager but sees himself as an overlooked intellectual. He aspires to the love of the more middle-class Pandora Braithwaite, but ends up with having a child with Sharon Bott. He later becomes the middle-aged and better dressed man who runs a bookshop and survives prostate cancer in Adrian Mole: The Prostrate Years (2010).

Mole was set in the east Midlands and Townsend was herself born in the city of Leicester, the eldest of five sisters. Her father worked in a jet engine factory and became a postman when it closed. Her mother was a housewife who worked in the factory canteen. She could not read until she was eight. It was her mother who taught her with Richmal Crompton's Just William books – the inspiration behind Adrian.

After failing the 11-plus, she went to a state school, South Wigston high school. She left at 15 but kept reading, devouring Woolworth's Classics (Jane Eyre, Heidi and co) before moving onto Russian and American literature.

As a chain-smoking teenager, dressed in black, she was fired from a job in a clothes shop for reading Oscar Wilde's The Ballad of Reading Gaol in the changing rooms. From the age of 14 she was also writing in secret.

By the time she was 18, she had married a sheet-metal worker and, by 22, had three children under five: Sean, Daniel and Victoria. When, after seven years, her marriage ended, she worked in assorted part-time jobs: at a petrol station, as a receptionist, for Bird's Eye frozen foods.

The toughness of that time is something she never underplayed. She remembered making pea soup for her children out of one Oxo cube and a tin of garden peas. Although her books later made her fortune, she said that no amount of "balsamic vinegar or Prada handbags" would make her forget what it was like to be poor.

Her first two books made her the best selling novelist of the 1980s. They were followed by several more in the series including Adrian Mole: The Wilderness Years (1993), Adrian Mole and the Weapons of Mass Destruction (2004). The books were adapted for radio, TV and theatre.

In 2001, Townsend wrote The Public Confessions of a Middle-Aged Woman aged 55 3/4 (2001), a collection of monthly columns written for Sainsbury's magazine from 1993-2001. Leicester University awarded her an Honorary MA in 1991. Sue's most recent novel is The Woman Who Went to Bed For a Year, published by Penguin in March 2012.

For some years, in Who's Who, Townsend listed her interests as "mooching about, reading, looking at pictures, canoeing". But all these, apart from the mooching, were to be sabotaged by ill health. She had TB peritonitis at 23; a heart attack in her 30s; Charcot's joint-degenerative arthritis, which meant she was in a wheelchair. She described herself as the "world's worst diabetic" – finding the disease hard to manage.

In the 1990s, she started to lose her sight. In 2001, she was registered blind and although, characteristically, she made jokes about it, she also wrote about the sense of loss, the disappearance of detail, the misery of suddenly finding she could no longer distinguish between a daffodil and a tulip. She talked about what it felt like to "throw words into the dark".

She dictated all her later books – usually to her eldest son, Sean. In 2007, she suffered kidney failure (also diabetes related) and was put on dialysis. In 2009, after a two-year wait for a donor, she had a transplant (Sean donated a kidney). In 2013, she suffered a stroke. – Guardian News & Media 2014