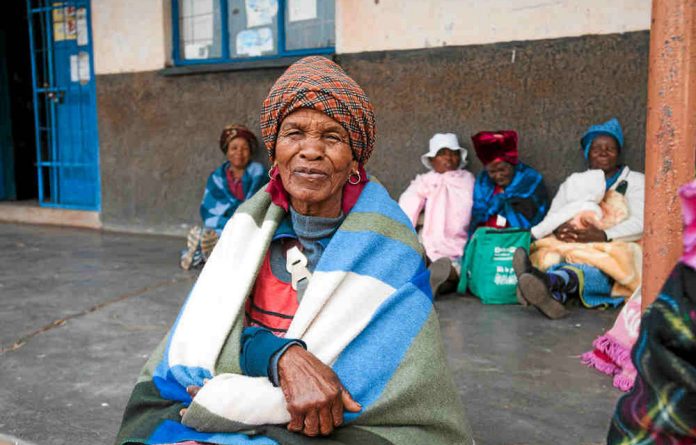 The partnership has the potential to drive millions of beneficiaries into Vodacom’s arms on the back of the grants payout system, tender-free.

This week the South African Communist Party (SACP) cried foul, saying beneficiaries believed it was compulsory for them to sign up with Vodacom before they could be paid. It said Sassa had boosted Vodacom’s business by handing it a “defined monopoly”.

Also controversial is a pledge by CPS’s United States-listed parent company to use the Vodacom arrangement as a channel for direct marketing to millions of grant beneficiaries.

CPS has a R10-billion contract with Sassa to distribute social grants.

The majority of the 10-million people that collect grants must phone a CPS call centre every month before their money is released. Sassa is advertising that beneficiaries should collect free Vodacom SIM cards with which they can phone the centre toll-free.

While it is, in fact, not compulsory to use Vodacom, beneficiaries must pay to phone the call centre using any other service provider, despite CPS’s earlier promise that the calls would be free.

CPS’s parent company, the US-listed Net 1 UEPS, has signed a standard dealer agreement, Vodacom said. Through this, it is likely to make commercial gains, but Vodacom would not disclose the commercial terms.

Another potential boost for Net 1, as it told Wall Street in an earlier regulatory filing, is that it plans to use the Vodacom partnership as “a channel to distribute customised marketing offers via SMS for various products and services”.

In the same filing, Net 1 said that it would “leverage” its Sassa contract “to provide recipients with additional financial and other services”.

Thus it appears that Net 1’s plan is to push microloans, funeral insurance and airtime at welfare recipients using the Vodacom numbers.

Net 1 chief executive Serge Belamant told amaBhungane that the company would start sending SMSes once the Vodacom SIM project was scaled up. He said the communication would focus on social programmes, but he did not contradict the promise of commercial marketing made in the filing to shareholders.

Last month, the Constitutional Court ruled that CPS’s contract with Sassa was invalid, and that the agency must start the tender from scratch, but that the CPS contract should stay in place at least until after the new tender.

Key to the finding was Sassa’s decision to favour CPS because it could conduct proof-of-life tests using biometric voice verification. To achieve this, recipients phone the call centre, which matches their voices to pre-recorded voiceprints.

Proof-of-life free for Vodacom users only

In his submissions to the courts, Belamant said these calls would be “toll-free”.

But speaking to ama­Bhungane this week, he said: “No, we didn’t put that in our court papers.”

Rather, he said, voice verification was now “for the account of the beneficiaries”. Only if beneficiaries signed up with Vodacom could they perform voice proof-of-life tests for free.

Belamant said this was “to help” them: “Sassa requires proof of life to be ascertained monthly. If beneficiaries do not comply, Sassa can suspend their grant.”

The benefit for Vodacom, Belamant explained, was that in addition to the toll-free call centre and three free SMSes to CPS, “the rest is [business] as usual, and they have to buy airtime or whatever they normally do on a cellphone”.

While Belamant said the Vodacom SIMs were not compulsory, he emphasised how lucrative the arrangement could become. “Well, that would be great if we could [make it compulsory], because then we would have 10-million starter packs out there.”

He said that because the Vodacom SIMs were distributed by Sassa, it was the agency’s responsibility to explain to beneficiaries that they were not compulsory.

Vodacom spokesperson Richard Boorman distanced the company from Sassa. “After they won this tender, Net 1 … asked [us] to become a dealer so they could distribute our SIM cards the same way we would supply them to any other dealer. We’re purely a technical partner.”

Usually, private companies that benefit from state contracts are supposed to tender their services via a competitive process to ensure fairness and to guard against corruption. Boorman said that Vodacom had had no direct dealings with Sassa. The agency confirmed this.

SACP Eastern Cape spokesperson Siyabonga Mdodi said that grant beneficiaries believed they were “compelled to have a Vodacom number which they do not need. They should choose their own cellphone network provider without being forced to use [Vodacom].”

Mdodi said complaints were increasing in communities in the province about Sassa’s voice biometric requirement: “It is certainly highly problematic and onerous to the needy. Its design will increase the burden on social grants recipients, while boosting Vodacom and other companies that have been given a defined monopoly.

Mdodi said the SACP’s Eastern Cape branch was calling for Sassa to urgently “halt and review” its ­biometric system.

Sassa chief executive Virginia Petersen confirmed the complaints. She said Sassa agreed with the issues raised by SACP and would investigate “how CPS is using and/or exploiting our database for purposes other than the payment of social grants. We are also investigating the alleged exploitation of the poor and the brand Sassa.

“We want to assure beneficiaries that their grants will not be ­suspended as a result of the implementation of this system.”

The intended listing of Sagarmatha Technologies was a mirror image of a deal in which the PIC was used to massively underwrite the Survé fortune.
Read more
National

Guptas sue for 27.5% of Independent Media

The Guptas are now legally fighting for a large stake in Independent Media due to a 2012 pact made between them and the company's chair, Iqbal Surve.
Read more
National

What’s black and white and in the red all over?

Though the Public Investment Corporation has a massive stake in the struggling Independent, it has all but handed control to Iqbal Survé.
Read more
Sport

After completing the trial stage of the Absa Cape Epic, nerves are beginning to kick in for AmaBhungane reporter Craig McKune.
Read more
National

Bidders were culled for not offering voice verification, which has not been used for two years
Read more
Advertising
Continue to the category
Politics