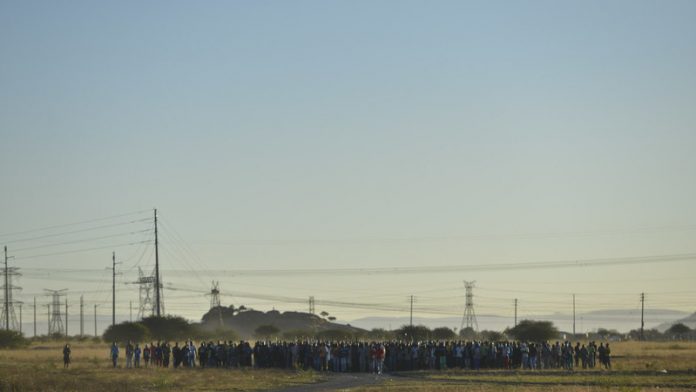 “These are employees who have been absent since January 23, so the recent intimidation does not explain their absence,” spokesperson Happy Nkhoma said. “A court order to this effect was obtained on February 27 requiring all essential workers to return to work by May 12.”

Under a recognition agreement signed with the Association of Mineworkers and Construction Union (Amcu), employees engaged in essential services may not participate in any strike.

City Press reported on Sunday that there was a hit list containing names of Lonmin staff who had returned to work and their union affiliation. But Nkhoma said the company was not aware of a hit list.

It was apparently obtained from staff who responded to SMSes the company sent to workers in a bid to end the platinum mining strike. “We are unaware of such a list. We have a database of employees who have indicated their intention to accept [our wage offer], which is kept highly confidential,” Nkhoma said.

He said even if such a list existed, it could have not come from the company’s database. Nkhoma said: “Nowhere in our SMS campaign had we asked for union affiliation.”

Opposition to Amcu’s court interdict
Meanwhile, the mining companies are expected to oppose an urgent court interdict by Amcu over its direct communication with striking employees at the Johannesburg Labour Court on Tuesday.

Sake-Beeld reported that Amcu applied last Monday for an urgent court interdict to stop the mines from communicating a new wage offer directly to workers.

Amcu wants the court to stop the companies from directly contacting about 70 000 workers. The mines have been communicating directly with their employees for the past two weeks in a bid to convince them to accept a new wage offer made in April after the employers’ talks with Amcu leaders deadlocked.

Amcu president Joseph Mathunjwa told the Mail & Guardian last week that Lonmin’s actions was leading to a repeat in the circumstances around the Marikana massacre.

“One should draw from history,” Mathunjwa said, referring to when Lonmin went outside the normal collective bargaining process in 2012 to resolve wage demands. “In 2012, Lonmin left the NUM [National Union of Mineworkers] and engaged the workers directly. Subsequent to that engagement, the company and the workers failed to reach agreement, and the matter was referred back to the union”

When the situation worsened, “Lonmin called the police and they massacred the people,” Mathunjwa said. “I have advised them [that] what they are doing [now] is a repeat of 2012 … I am getting very worried.”

He noted that the state has departments that deal with labour relations issues, yet it has not intervened to assist the parties to come to an agreement. “But for the state to send police there now, it is clear they are siding with the capital,” he said. “Everyone is worried; we want to have a settlement and people returning to work.”

Amcu argued in court papers that the SMS campaign and pre-recorded phone messages to workers from the companies breached the recognition agreement with the mining union.

In a joint statement last Wednesday, the three companies said their efforts to end an almost four-month-long strike were not in contravention of regulations or agreements. The companies would ask the court to endorse their communication efforts to find a resolution.

Returning workers
Amcu members at Lonmin, Impala, and Anglo American Platinum downed tools on January 23 demanding a basic salary of R12 500 per month. They have rejected the companies’ offer that would see a minimum cash remuneration of R12 500 by July 2017. The remuneration includes living-out and holiday leave allowances, but excludes medical and retirement benefits, and any bonuses.

Nkhoma said the number of people reporting for work was not as high as they had hoped.

“We understand that every employee that reported for duty braved high intimidation and threats to do so. We shall release statistics once it is safe to do so.” Police and security forces had helped in creating a safer environment. He said the company would fight Amcu’s bid to stop the company communicating directly with workers, to be heard in the Labour Court in Johannesburg on Tuesday.

He said a recognition agreement signed with Amcu did not prohibit the company from communicating directly with its employees.

Amcu and the negotiation table
Meanwhile, earlier on Monday, the platinum mine, who has all its operations in the Rustenburg area, said that the strike caused unprecedented damage to both mineworkers and companies, in an apparent appeal to Amcu to return to the negotiation table.

Lonmin chief executive Ben Magara said mining companies had already lost a third of their production for the year and R18.5-billion in revenue, while mineworkers had given up R8.3-billion in wages, benefits and bonuses. He said while the companies may eventually recover some of these losses, “for employees the losses will never be made up”.

He was speaking at a press conference held at Lonmin’s Melrose Arch headquarters in Johannesburg. The conference came ahead of a labour court hearing on Tuesday brought by Amcu to stop mining companies Anglo American Platinum, Impala Platinum and Lonmin from corresponding with striking Amcu employees.

The company denied City Press‘s report that a list of workers who returned to work had been leaked. The paper said it had part of a list, which held that the names of Lonmin employees, among those three men employed by Lonmin who were killed.

Lerato Molebatsi, chief executive for communication and public affairs, said “no such list had come out of Lonmin”. She said rumours of the list were “mischief” intended to scare workers. “I have seen the list and there is no correlation between the list they claimed to have used and Lonmin membership,” she said.

Any reports of intimidation would be investigated if reported to the mine. The mine, now in its 17th week, is the longest and most costly strike in the country’s mining history.  Last week three miners and a women were killed, one of them on the way to work.  Deaths were linked to strike action Magara said, while it was not clear if the other deaths were linked, the men were all Lonmin employees.

Mine re-open
Lonmin re-opened its operations on May 14 in anticipation of staff returning to work, after a survey indicated that more than half wanted to return to work. Incidents of intimidation of workers appear to have acted as a deterrent with mine workers admitting to media and saying on radio that they feared for their lives.

Magara said Amcu’s R1-million strike fund, with nearly 800 000 workers in the platinum sector, would provide R14 for every employee who is on strike. “Its not clear what they will be able to do with that,” he said. The question to be asked is who “could possibly be benefitting from the strike at this stage”, Magara said.

“Our first prize is still to reach a negotiated settlement with Amcu, the majority union, but the situation is becoming sufficient desperate to look at affecting other options. We will make it possible for all those who want to return to work to do so and look at legal options,” he said. Lonmin would not reveal what legal options were available to the company, saying it would depend on how issues around the strike evolved.

There are two matters that have been placed before the Labour court, one of which was continuing, but details of the application were not provided. Right to intervene Lonmin said it believed the company had a right to communicate with workers, firstly to ascertain what their grievances were, which informed their negotiation process.

Amcu’s Joseph Mathunjwa has said the union has been mandated to represent union members and that companies had no right to intervene. When asked if the company intended to provide accommodation at its operations for staff wishing to return to work, Magara said this would not be considered. He said staff had a right to come to work if they wished to do so, and that he had no intention of setting up “concentration camps” at the mines.

Magara said he respected Amcu’s right to call a strike, but at the same time workers who did not want to take part in the strike had to have the right to return to work if they wished to do so. – Additional reporting by Sapa, Lisa Steyn