Still no agreement in platinum strike 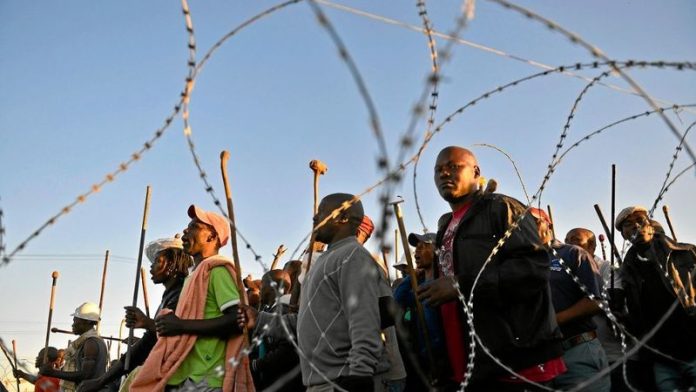 No agreement has yet been reached with striking platinum mineworkers, their employers said in a joint statement.

“Contrary to some media reports, no agreement has yet been reached,” Anglo American Platinum, Impala Platinum and Lonmin said in a statement on Friday night.

The companies confirmed that the Labour Court continued to broker mediation between themselves and the Association of Mineworkers and Construction Union (Amcu). “The producers reaffirm their commitment to finding a common commitment to endeavour to resolve this dispute.”

Members of Amcu at the companies went on strike on January 23 demanding a basic salary of R12 500 per month. They rejected the companies’ offer that would bring their cash remuneration to R12 500 by July 2017.

Hungry families
Hundreds of mineworkers and their families stood in a long queue at the Wonderkop stadium in Marikana on Saturday to receive food parcels from the Gift of the Givers.

“This is better than nothing. I will have some thing to eat,” said Pako Liau.

“This rice will last for three days if I do not share with others but, if my brother has nothing to eat and I have a cup of rice left I have to help him.”

More help
The Gift of the Givers also provided a 24-member medical team to give healthcare to people in the area.

The Gift of the Givers said it had provided food parcels to over 2 565 families, fed 5 000 people, distributed 800 blankets and provided clothing packs to 1 100 families in the North West platinum belt.

The food parcels were for mineworkers who had been on a strike since January. “We have seen the demeanour of people swing from desperation to happiness to pure jubilation as food and the other items have been rolling out,” said Thomas. “In spite of the suffering of the people there has been an unusual calm on the mines as recipients gratefully receive what has been on offer.” –Sapa