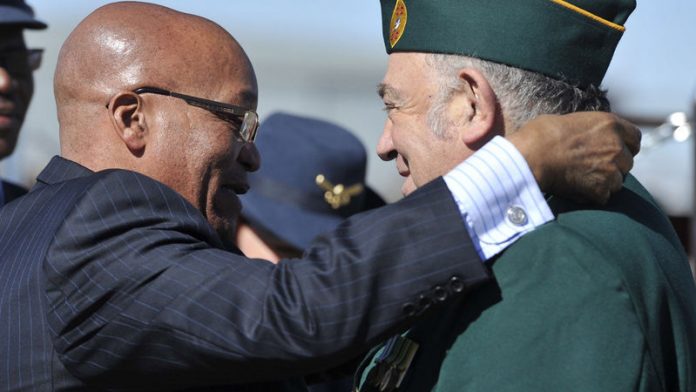 On May 15, Pierre Steyn, former secretary of defence, made an appeal to the arms procurement commission:

“An unjustifiable decision was made to purchase British aircraft at considerable extra cost, which was unnecessary. The question is why this was done. One of the ways of finding the answer is to ask who benefited from these irregular and unjustified decisions,” Steyn said in his testimony before the commission. “That is the key question I hope the commission will investigate and answer.”

So far, the commission appears to have made little progress into answering these questions. In the weeks to come, the ministers responsible for the arms deal will finally testify and it appears as though Steyn still plans to make some unflattering statements about them.

Yet the commission’s record so far makes it unlikely that even these political heavyweights will provide answers to the questions Steyn posed.

Former intelligence minister (deputy minister of defence at the time of the arms deal) Ronnie Kasrils was due to testify on Monday but last minute changes to the schedule will see him testify on Friday while Steyn will be cross-examined on Thursday.

The commission has adjourned until then, spokesperson William Baloyi told the Mail & Guardian on Sunday.

He said the primary reason for the postponement was additional requests to cross-examine Steyn, “whose testimony seemed to implicate politicians”, including one from then-president Thabo Mbeki.

“So we decided to let him [Steyn] be cross-examined first,” he explained, so that those likely to be implicated had time to prepare their response.

Mbeki and former finance minister Trevor Manuel are due to testify in mid-June.

Meanwhile, Kasrils will be the second former minister to testify about the multibillion-rand arms deal. Former trade and industry minister Alec Erwin testified in February. While not personally accused of corruption, Kasrils – now an ANC outsider – is well-placed to provide insight into the inner-workings of the 1999 deal.

However, judging by the commission’s non-confrontational demeanour to date, it is more likely that Kasrils will be asked broader questions about the policy direction of the defence ministry at the time.

Erwin admitted that “things could have been done differently” but was not asked exploratory questions about allegations on corruption around the deal, or the controversial offset deals, which birthed many of the existing corruption claims.

A dispute about the availability of documents before the commission saw Erwin leave the Pretoria venue without being cross-examined.

The former ministers’ evidence will be a test of the commission itself: critics will be watching to see whether the former ministers, who will only have a day each on the stand, will be made to answer to allegations of political interference or merely asked to describe the broad-strokes policy on decisions taken, which ostensibly underpinned the deal.

Irregular
So far, only one public controversy has been raised against Kasrils in relation to the deal: that he was part of a political collective that interfered in the procurement of the weapons, rendering the process irregular.

Being deputy minister of defence when the deal was signed and then minister of defense, Joe Modise, now dead, Kasrils is perhaps the only person who can provide valuable insight into the mechanisms within the ministry that led to crucial decisions surrounding the arms deal.

Kasrils may have defended the deal at the time but 13 years is a long time. In that time, Kasrils has become a vocal critic of government and the ANC . In 2011, he criticised the party in Parliament for its handling of the Protection of State Information Act.

Earlier this year, Kasrils and other disgruntled ANC members launched a “vote no” campaign , urging voters to spoil their votes or vote for smaller parties in the 2014 national elections.

As it stands, there are no obvious allegations of corruption against Kasrils, so it is unlikely he will face any difficult questions while testifying before the commission. However, it is possible he will be asked about Modise’s thinking at the time.

It is also possible Kasrils will be asked for his retrospective opinion on the arms deal, in a style of questioning that evidence leaders have used on former witnesses. Witnesses were asked by evidence leaders to respond to broad “allegations”, made by “critics”, that the deal was irregular or corrupt.

The stock response so far has been to paint the deal as necessary but tainted by minor, procedural slip-ups. Kasrils, now an established critic of government, could be the first witness to deviate from this pattern.