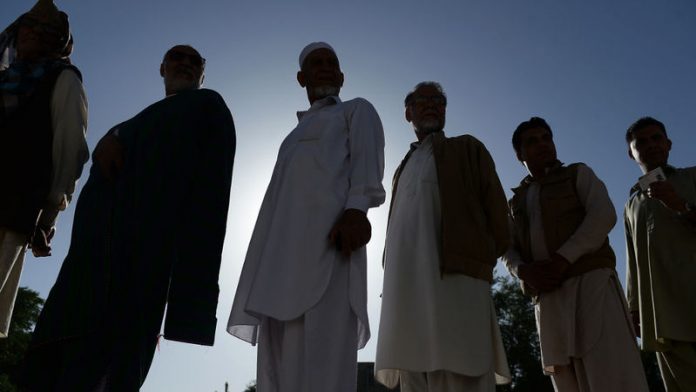 President Hamid Karzai is due to step down after ruling the country since 2001 when a US-led offensive ousted the austere Taliban regime for sheltering al-Qaeda militants behind the 9/11 attacks.

Afghan officials and international allies are hoping for a repeat of the first-round vote in April when the insurgents failed to launch a single high-profile attack and voter turnout was more than 50%.

But the stakes are high with the Taliban issuing specific threats to target polling stations and widespread fears that electoral fraud could produce a contested result.

In a sign of international concern, UN head of mission Jan Kubis issued a stark warning to candidates’ supporters not to resort to the ballot-box stuffing that marred the 2009 election when Karzai retained power.

“Do not commit fraud. Do not use intimidation or manipulation to favour your candidate,” Kubis said ahead of polling day, when voting stations opened on time at 7am.

The two candidates came top of an eight-man field, triggering the run-off election as neither reached the 50% threshold needed for outright victory.

A smooth handover in Afghanistan’s first democratic transfer of power would be a major achievement for the international effort to establish a functioning state after the depredations of the Taliban era.

The country has seen massive changes as billions of dollars of aid money poured in, bringing rapid development in some cities but only limited improvements in security, women’s rights and education.

Counting the ballot will take weeks. The preliminary result is due on July 2 and a final result on July 22.

‘Non-stop’ assaults
Ahead of the vote, the Taliban said that polling booths would be targeted by “non-stop” assaults.

“By holding elections, the Americans want to impose their stooges on the people,” the insurgents said on their website.

The run-up to the April election was hit but several major attacks but recent weeks have been relatively peaceful except for a suicide blast targeting Abdullah in Kabul last week that left 12 dead.

Police and soldiers searched almost every car on the roads of the capital and Afghan officials expressed confidence in the security forces, who have been trained by the US-led military coalition.

“The level of threats is higher compared to the first round,” interior minister Omar Daudzai said.

“But we have gained far more experience and we have better equipment and are in a much better position to prevent any possible attack by terrorists.”

Constitutionally barred
Ethnic friction is also a concern as Abdullah’s support is based among the Tajik minority and other northern tribes, while Ghani is a Pashtun – Afghanistan’s largest ethnic group, which is strongest in the Taliban heartlands of the south and east.

Karzai, who is constitutionally barred from a third term in office, has fulfilled his pledge not to interfere in the election – in public at least – though he is tipped to retain an influential role in national politics after handing over power.

His relationship with the US soured badly and the next president is likely to reset ties by signing a long-delayed pact for some US troops to remain on a training and counter-terrorism mission after this year.

Last month President Barack Obama said that if the pact is signed, 9 800 of the 32 000-strong US deployment would stay in 2015 with just a few thousand remaining into 2016.

The US-led Nato military mission said it would be in a “support role” on Saturday, ready to assist if requested by Afghan authorities.

Upbeat note
The coalition has suffered about 3 450 fatalities since operations began in later 2001.

European Union chief election observer Thijs Berman stuck an upbeat note on the eve of the election, saying that before the first round “there was much skepticism … none of it was true”.

More than seven million people voted on April 5 but turnout on Saturday may be lower after an apparent dip in public interest.

Priorities for the incoming president will be to stabilise the faltering economy as aid funding falls, and a fresh attempt to bring peace after decades of war by exploring peace talks with the Taliban. – Sapa-AFP

Abdullah and Ghani on course for runoff vote in Afghanistan polls