Nadine Gordimer: A light shining into the dark 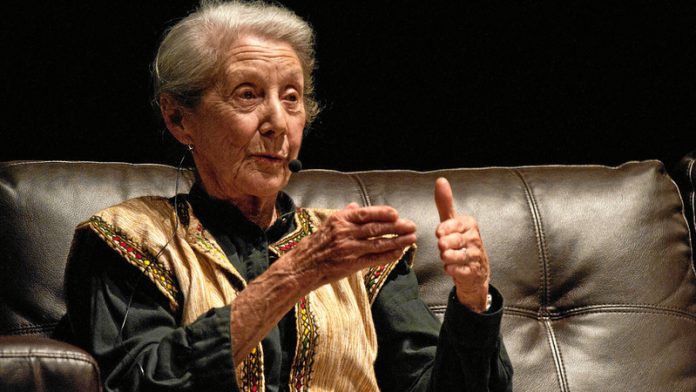 “It was ugly,” wrote Nadine Gordimer in 1973, making no apology for the brutalised landscapes she grew up in and called home for nine decades.

“Rusted iron, a three-day beard of prickly khaki-weed, the veld burned off and the sand blowing in the season that passes for spring, in Africa.”

This directness, as well as Gordimer’s ability to retrieve a strange beauty from the blighted landscapes surrounding Johannesburg, won her an early fan in David Goldblatt.

The Randfontein-born photographer first encountered her writing in the late 1940s, as a high school pupil reading her debut collection of short stories, The Soft Voice of the Serpent.

“Her early stories made tangible for me the tastes and experiences, smells and places I knew intimately but which I had never managed to verbalise,” remarked Goldblatt in a 2008 interview.

“The stories actively propelled me into wanting to realise this acute sense of these places and people in photographs.”

Bland Bs
When in the late 1960s he eventually began photographing the mining landscapes around Boksburg, Benoni and Brakpan – the three bland Bs that preface entry into Gordimer’s birthplace, Springs – he decided to approach her to write about his work.

Lionel Abrahams, a poet and influential literary editor who years later would praise Gordimer’s “philharmonious prose”, made the crucial introduction.

The mechanics of the hook-up had a different pace to today’s instant email introductions. Abrahams presented Gordimer with some of Goldblatt’s prints to view. (A keen viewer of art, her tastes sharpened through her marriage to art dealer Reinhold Cassirer). Gordimer liked what she saw. Yes, she replied. An influential collaboration ensued.

Published in 1973, On the Mines was Goldblatt’s first book of photographs that included a sumptuous and unapologetic essay by Gordimer, marked by its cool wonderment at the brutal sensory details of life in what then was the world’s pre-eminent gold mining region.

Clipped retorts
Four decades later, seated between Goldblatt and Gordimer for a conversation at the Goodman Gallery, I asked them if there were any discrepancies in their viewpoints. After all, they came from opposing points of the compass.

Goldblatt, who has many times joked about looking down on the East Rand from the vantage of Randfontein, smiled. Gordimer, however, was a chiselled statue. “No,” she said. And so it continued: one series of clipped retorts followed by another.

I offered, in a desperate bid at seriousness, the view that in 1972 the Durban dockworker strike had initiated further labour action that spilled over into 1973 and gave the wider labour movement a much-needed shot in the arm.

In publishing On the Mines in that crucial year, in releasing a book that made no bones about the exploitation of black labour, was she perhaps expressing solidarity with the cause? “No.”

Okay, so what about that beautiful phrase from The Conservationist, “industrial rusticity”, which Gordimer uses to account for the fallow mining land that surrounds Johannesburg’s southern edges. Could she perhaps speak about that? “Did I write that? Can’t remember.”

Different side
Later, seated at a lunch table in Atholl, Gordimer revealed a different side. She was dwarfed by a group of artists and gallery staff breaking bread.

William Kentridge said something. Gordimer challenged him. The tête-à-tête culminated with her cutting Kentridge short: “I don’t believe you. I am going to ask your father.”

It was not a mean-spirited gesture, not even an assertion of rank. Rather, it was a moment of intimacy between two family friends, aristocrats of a particular type, both arguing their positions from a vantage of privilege, a privilege that did not preclude activism, and plaited cultural expression with political comment.

Gordimer’s influence on Kentridge cannot be overstated. In a 2005 interview he told me how reading her Booker prize-winning novel The Conservationist clarified Johannesburg for him, made its ugly landscapes legible.

“People like Gordimer or JM Coetzee act as confirmations of a sense of the world, rather than being where ideas spring from.”

Cassirer and Kentridge
It was Gordimer’s husband, Cassirer, who prompted a younger and more uncertain Kentridge to continue with his work. It was also Cassirer who gave Linda Givon, the former owner of the Goodman Gallery, an artist on the cusp of greatness when he retired.

“You mustn’t eat with your hands when you have lunch with her,” he admonished Kentridge at a luncheon formalising the handover. “You must eat with your fork and knife.”

Cassirer’s world unavoidably informed Gordimer’s writing. In her novel Occasion for Loving (1963), the British expatriate Anna Davis finds herself with the liberal Johannesburg couple, the Sitwells. They discuss whether “group shows were more or less satisfying than one-man shows”. Anna also has an affair with a black artist, Gideon Shibalo.

Unlike John Berger, the novelist and art critic who won the Booker prize in 1972 for G – and famously donated half his winnings to the Black Panther Party – Gordimer did not try negotiate that volatile space between fiction and art criticism, a space explored by writers such as Don DeLillo and Ivan Vladislavic.

Her short story Africa Emergent, written in July 1970, tells the story of sculptor Elias Nkomo, a man she describes as “slight, round-headed, tiny-eared, dunly dressed, and with a frown of effort between his eyes”. Like Jackson Hlungwani, his work is “carved out of streaky knotted wood”. And like Hlungwani, the white dealer market seizes him. Nkomo is offered a one-man show.

“An art critic wrote about his transcendental values and plastic modality,” Gordimer offers via her narrator, a white architect.

“Christ, man, does he dig it or doesn’t he?” responds Nkomo.

He is shortly forgotten by the carnivorous art market, shacks up with “a patroness … an American lady, very old and wealthy”, and – in an echo of the real life story of artist Dumile Feni, who went into exile in 1968, some say because of his affair with American journalist Mary McFadden – leaves South Africa.

Gordimer stayed put and wrote, possibly with waning acuity, as her final novel – wrapped in a Karel Nel artwork – revealed. But for a long time, longer than most, she was a lighthouse penetrating the thick dark with a fragile light.

Sean O’Toole is a Cape Town-based writer, co-editor of Cityscapes, a journal of urban enquiry, and author of The Marquis of Mooikloof.

A voice that rose above the rumble of race

Sometime in the mid-1990s, in that exciting and scary interregnum between the unbanning of the liberation movements and the first democratic election, I shared a stage with Nadine Gordimer at the old Windybrow Theatre in Hillbrow.

It was a Congress of South African Writers (Cosaw) event; in those days, there was an ideological rivalry between Cosaw and the more Black Consciousness-aligned African Writers Association.

A member of the latter groupuscule, I believe, took me to task after I read a passage from a fictional reconstruction of the Bhisho massacre (Red Rover), from the point of view of one of the participants.

I was told by the audience member who spoke up that it was wrong for white writers to appropriate the experience of black people. I replied that I could see the logic, but in fact in my piece, at least, I was thinking of how the Bhisho massacre must’ve looked from the perspective of Ronnie Kasrils, one of its leaders, and ­Kasrils was white. (“Or he was when I last checked,” I joked, but this was no time for jokes.)

Gordimer intervened, in her high, somewhat piercing voice (it was like a flute that can be heard even over much low bass rumble), saying in her slightly imperious manner that she couldn’t see why white people shouldn’t write about black people and black people shouldn’t write about white people as much as everyone liked. She confessed that she had once abandoned a piece about a black child because she simply couldn’t see the world from that angle, but that didn’t mean we shouldn’t try to see into and through each others’ worlds.

The debate went on for a bit after that, with some more long statements from the floor. If Gordimer had intended to nip them in the bud, it hadn’t worked.

What I liked, though, in her response, besides the fact that she stuck by racial crossover instead of separatism, was that she privileged the literary over the political judgment, or at least in the case of who was allowed to write about whom. Instinctively, she was in favour of opening, not closing, and that’s what made her a great writer too. – Shaun de Waal

On our Lists this week: Noname, Mongane Wally Serote, and Sawubona Music Jam

In between working on Friday copy, this is what the team reads, listens to and watches
Read more
Friday

M&G Literary Festival: Being here or being square

The M&G Literary Festival will consider Nadine Gordimer's notion 'Being here: in a particular time and place.'
Read more
Friday

Gordimer gave us the gift of complexity

Nadine Gordimer observed our convoluted society with a precise and prescient eye and did much to shape our understanding of it, writes David Medalie.
Read more
Friday

We must make do without Nadine Gordimer

The tiny woman with a great voice left enough literature to set a standard, wake us up and inspire us.
Read more
Advertising
Continue to the category
Coronavirus