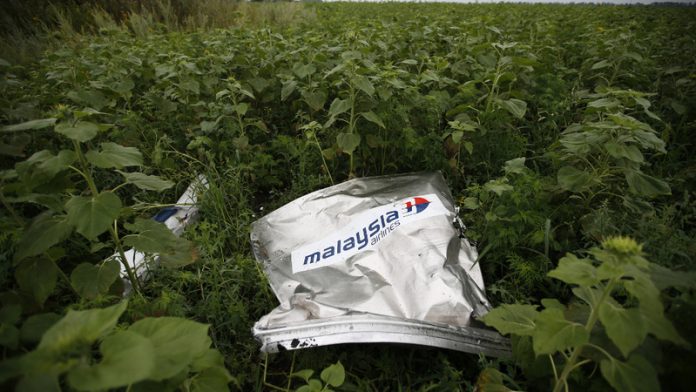 Ukraine accused Russia and pro-Moscow rebels on Saturday of destroying evidence to cover up their guilt in the shooting down of a Malaysian airliner that has accelerated a showdown between the Kremlin and Western powers.

As militants kept international monitors away from wreckage and scores of bodies festered for a third day, Russian President Vladimir Putin urged the rebels to cooperate and insisted that a UN-mandated investigation must not leap to conclusions. Moscow denies involvement and has pointed a finger at Kiev’s military.

The Dutch government, whose citizens made up most of the 298 aboard MH17 from Amsterdam, said it was “furious” at the manhandling of corpses strewn for kilometres over open country and asked Ukraine’s president for help to bring “our people” home.

After US President Barack Obama said the loss of the Kuala Lumpur-bound flight showed it was time to end the conflict, Germany called it Moscow’s last chance to cooperate.

European powers seemed to swing behind Washington’s belief Russia’s separatist allies were to blame. That might speed new trade sanctions on Moscow, without waiting for definitive proof.

“He has one last chance to show he means to help,” Dutch Prime Minister Mark Rutte said after a telephone call to Putin.

Britain, which lost 10 citizens, said further sanctions were available for use against Russia. “If Russia is the principal culprit, we can take further action against them and make it clear this kind of sponsored war is completely unacceptable,” Defence Minister Michael Fallon told the Mail on Sunday.

Prime Minister David Cameron, writing in the Sunday Times, said European countries should make their power count in dealing with the Ukraine crisis, “yet we sometimes behave as if we need Russia more than Russia needs us”.

German Chancellor Angela Merkel, the most powerful figure in the EU, spoke to Putin on Saturday, urging his cooperation. Merkel’s foreign minister, Frank-Walter Steinmeier, told Bild am Sonntag newspaper: “Moscow may have a last chance now to show that it really is seriously interested in a solution.”

“Now is the moment for everyone to stop and think to themselves what might happen if we don’t stop the escalation.”

Germany, reliant like other EU states on Russian energy and more engaged in Russian trade than the United States, has been reluctant to escalate a confrontation with Moscow that has revived memories of the Cold War. But with military action not seen as an option, economic leverage is a vital instrument.

Russia said on Saturday it was retaliating against sanctions imposed by the United States last week, before the air disaster, by barring entry to unnamed Americans and warned of a “boomerang effect” on US business. But Foreign Minister Sergei Lavrov and US Secretary of State John Kerry did agree in a phone call to try to get both sides in Ukraine to reach a consensus on peace, Russia’s Foreign Ministry said.

The State Department, however, put the onus on Russia, saying Kerry urged Russia to take “immediate and clear actions to reduce tensions in Ukraine”.

Driving home its assertion that the Boeing 777 was hit by a Russian SA-11 radar-guided missile, Ukraine’s Western-backed government said it had “compelling evidence” the battery was not just brought in from Russia but manned by three Russian citizens who had now taken the truck-mounted system back over the border.

The prime minister, denying Russian suggestions that Kiev’s forces had fired a missile, said only a “very professional” crew could have brought down the speeding jetliner from 33 000 feet (10 000m) – not “drunken gorillas” among the ill-trained insurgents who want the Russian-speaking east to be annexed by Moscow.

Fighting flared in eastern Ukraine on Saturday. The government said it was pressing its offensive in the east.

Observers from Europe’s OSCE security agency visited part of the crash site near the village of Hrabove for a second day on Saturday and again found their access hampered by armed men from the forces of the self-declared People’s Republic of Donetsk. An OSCE official said, however, they saw more than on Friday.

At one point, a Reuters correspondent heard a senior rebel tell the OSCE delegation they could not approach the wreckage and would simply be informed in due course of an investigation conducted by the separatists. However, fighters later let them visit an area where one of the airliner’s two engines lay.

“The terrorists, with the help of Russia, are trying to destroy evidence of international crimes,” the Ukrainian government said in a statement. “The terrorists have taken 38 bodies to the morgue in Donetsk,” it said, accusing people with “strong Russian accents” of threatening to conduct autopsies.

Kerry told Lavrov the United States is “very concerned” over reports that the remains of victims and debris from the crash site have been removed or tampered with, the State Department said. He said Washington was also concerned over denial of “proper access” for international investigators and OSCE monitors, it said.

Ukrainian President Petro Poroshenko urged the United Nations on Saturday to label rebels fighting his forces in the eastern regions of Luhansk and Donetsk as belonging to “terrorist organisations”.

In the regional capital Donetsk, the prime minister of the separatist authorities told a news conference that Kiev was holding up the arrival of international experts whose mission to probe the cause – and potentially blame – for the disaster was authorised on Friday by the United Nations Security Council.

And contrary to earlier statements by the rebels, Alexander Borodai said they had not found the black box flight recorders. He said rebels were avoiding disturbing the area.

“There’s a grandmother. A body landed right in her bed. She says ‘please take this body away’. But we cannot tamper with the site,” Borodai said. “Bodies of innocent people are lying out in the heat. We reserve the right, if the delay continues … to begin the process of taking away the bodies. We ask the Russian Federation to help us with this problem and send their experts.”

Midday temperatures are around 30 Celsius.

At Hrabove, one armed man from the separatist forces told Reuters that bodies had already been taken away in trucks. Another said that immediately after the crash people had looted valuables. But fighters and local people say they have been doing their best to collect evidence and preserve human remains.

As the stench of death began to pervade the area after Thursday’s crash, correspondents watched rescue workers carry bodies across the fields and gather remains in black sacks.

Meeting Ukrainian President Poroshenko in Kiev, Dutch Foreign Minister Frans Timmermans said: “We are already shocked by the news we got today of bodies being dragged around, of the site not being treated properly … People are angry, furious.”

The Ukrainian security council in Kiev said staff of the Emergencies Ministry had found 186 bodies and had checked some 18 square kilometres of the scattered 25 square kilometres crash site. But the workers were not free to conduct a normal investigation.

“The fighters have let the Emergencies Ministry workers in there but they are not allowing them to take anything from the area,” security council spokesperson Andriy Lysenko said. “The fighters are taking away all that has been found.”

Malaysia, whose national airline has been battered by its second major disaster this year, said it was “inhumane” to bar access to the site around the village of Hrabove, but said Russia was doing its “level best” to help.

A team of Malaysian experts flew in to Kiev on Saturday and experts from Interpol are due there on Sunday to help with the identification of victims. Dutch, US and a host of other specialists are being lined up to help in the investigation.

As tales of personal grief unfolded, Malaysian Prime Minister Najib Razak revealed his own family was involved – his 83-year-old step-grandmother had been aboard the flight.

The United Nations said 80 children were aboard. The deadliest attack on a commercial airliner follows the disappearance of flight MH370 in March with 239 passengers.

Malaysia Airlines has defended its use of the route, 1 000 feet (300m) above the area closed by Ukraine due to the hostilities. Some airlines had been avoiding the area, though many others were flying over. The issue has raised questions of liability for the deaths and damage and about international supervisors’ roles.

The scale of the disaster could prove a turning point for international pressure to resolve the crisis in Ukraine, which has killed hundreds since pro-Western protests toppled the Moscow-backed president in Kiev in February and Russia annexed the Crimea peninsula a month later. – Reuters