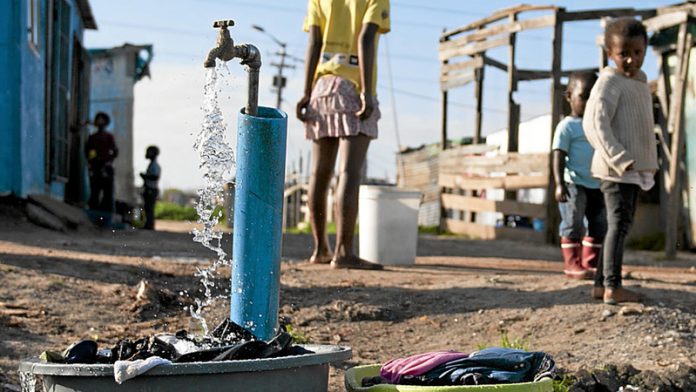 South Africa’s water and sanitation infrastructure is crumbling because of a chronic lack of investment. The department of water affairs says it needs more than R600-billion to fix the problems. But the fiscus can only provide half of this, so the department is considering turning to controversial options like public-private partnerships.

In her budget speech this year, newly installed Minister of Water and Sanitation Nomvula Mokonyane said that 10% of existing water systems were dysfunctional. A further 26% were not reliable. The department has maintained that around 95% of South Africans have “access” to water. But all this means is that water infrastructure exists in their vicinity, not that it necessarily works.

South Africa is one of a few countries that enshrines the right to water in its Constitution. There is no legal definition of what this entails, but it is contained in the norms and standards for water published by the department, as well as in court rulings following the water woes of Carolina in 2012.

Each person must get a basic free allowance of 25 litres a day (a bath uses 80 litres, and flushing a toilet 10 litres). To make this easier to manage, this has been equated to 6 000 litres a household a month. The water must be available within 200m of a person’s house and with a 98% guarantee of supply throughout the year.

Private partnerships
The water department’s annual budget hovers at around R12-billion. With this it must manage the country’s water infrastructure and run 150 water and wastewater projects. It stores and moves water around the country, so that enough can be supplied to the places that need it.

Municipalities then buy the water and provide it to people. There is a grey area here, because water affairs loses its jurisdiction in municipal areas but can advise and intervene in disasters.

A third of all this water is lost. In rural municipalities 73% of water is lost. The Water Research Commission said last year that this amounted to R7-billion lost each year. When this is included with all “non-revenue” water, where it leaks or people do not pay for it, that costs R12-billion a year, which has to be paid for by government.

In Johannesburg, Rand Water, which is owned by the state, makes sure that water, mostly from the Vaal Dam, moves to the right areas. Johannesburg Water is then responsible for piping water to people’s homes.

For those who cannot afford the water, the municipality pays the company to provide the free basic 6 000 litres a month. Because everyone has a right to water, the national government provides each municipality with an “equitable share”. This is meant to cover the cost of providing 6 000 litres of water a household a month.

R670-billion required
In April 2012, then water minister Edna Molewa said her department needed R570-billion, with only 44% of this financed. “It is very likely that we are going to need a lot more money,” she said and admitted that a tariff increase was “probable”.

In her budget speech this month, the current minister, Mokonyane, said capital investment and infrastructure would “require an estimated R670-billion”. Forty-five percent of this was funded. “These investments will have to be funded from on-budget and off-budget sources through partnership[s] with the private sector.”

This is one of the few options available to the department to finance the shortfall. The World Bank says sub-Saharan Africa has a water and sanitation backlog of R1-trillion. “The cost of water infrastructure delivery continues to escalate to the point where many developing countries simply cannot afford it,” said the bank.

South Africa is included in these countries, and the bank suggests “innovative approaches” to funding. The foremost is public-private partnerships, which it made a condition of any restructuring that came with its loans in the 1990s.

A mixed example of privatisation has been in the Mpumalanga municipality of Mbombela. In 1999, a 30-year concession was given to a private company registered in the Netherlands to provide water. The Greater Nelspruit (Mbombela) Utility Company would finance its operations by collecting money from those who purchased its water.

A World Bank review of the scheme published in 2012 said water access had grown from 45% to 95% in that time. The municipality’s water and sewerage treatment plants had also been consistently awarded Blue Drop and Green Drop status.

The bank said: “Water and sanitation services in the concession area are in a much better condition than if the municipality had continued to operate them directly.”

But it also found that 68% of households did not have a 24-hour supply of water. There had been no investment of shareholder funds in infrastructure.

This was despite the initial proposal saying “a primary reason for the undertaking” was to raise R250-million for infrastructure, because the municipality could not do this.

Chronic shortage
South Africa’s crisis is also one of availability. A report by auditing firm KPMG on the water sector this year said the country is the 30th driest in the world. Aggregated, each South African had 100 cubic metres of water a year. Annual rainfall was 500mm, against a world average of 860mm.

This is why the water affairs department needs R600-billion. Its biggest water scheme, the second phase of the Lesotho Highlands Water Project, will come online in 2022. The project already provides most of Gauteng with its fresh water, at a minimum annual cost of R150-million paid to Lesotho, just for access. The second phase will cost R11-billion.

Water ministers Molewa and Mokonyane, as well as senior department personnel, have mentioned on numerous occasions that public-private partnerships are the only way to bridge the R300-billion funding gap.

This has been heavily opposed by groups such as the Coalition Against Water Privatisation. It said that privatisation policies in the 1990s led to a “dramatic increase in the price of water for the poor across South Africa”.

In Mbombela this led to an increase of up to 69% in the cost of water. In KwaZulu-Natal it led to a cholera outbreak in 2000. When communal taps were replaced by a prepaid metering system people were forced to turn to rivers for their water, the coalition said.

But municipalities have also faced the collapse of their water and sewerage works, because of a lack of funding for these. In Lekwa Teemane, outside Bloemhof in the Free State, three babies died because of water being contaminated by raw sewage.

In her budget speech this year, Mokonyane said R41-million was being taken from other parts of the water affairs budget to fix the problem.