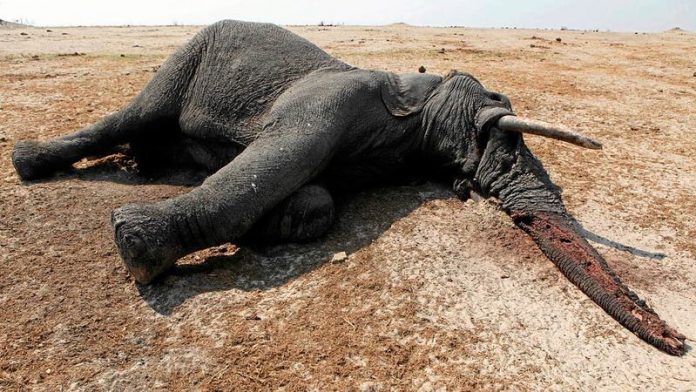 African intelligence chiefs have red-flagged wildlife poaching as a security risk, saying proceeds from the crime are being used to fund terror groups.

Heads of 25 intelligence organisations, which included South Africa, Angola and Nigeria, met in Harare recently to discuss the escalation of poaching and trafficking activities across the continent, and are mulling over joint operations with military and wildlife management authorities.

According to minutes of the meeting in Harare from July 8 to 11, terrorism, which for long has mainly been associated with Middle Eastern countries, was said to be on the rise in Africa, with some of the prominent groups – Boko Haram in Nigeria, al-Shabab in Somalia and Kenya and the Lord’s Resistance Army (LRA) in Uganda – being cited.

The intelligence chiefs, who met under the banner of the Committee of Intelligence and Security Services of Africa (Cissa), said poaching is now worrisome because there is “a great deal of evidence of fledgling linkages between poaching and wildlife trafficking on one hand and transnational organised criminal activities, including terrorism and weapons proliferation, on the other”.

The meeting, held under the rubric The Threat Posed by Poaching and Wildlife Trafficking to Security and Stability in Africa, said that terrorist groups from Nigeria, South Sudan, Uganda and the Democratic Republic of Congo (DRC) were all benefiting from the poaching and trafficking of wildlife and recommended that the matter be treated as a transnational security concern.

“There are indications that some of the proceeds from poaching are being used to fund the activities of armed groups and negative forces, as well as other destabilising activities,” said retired Major General Happyton Bonyongwe, Cissa chairperson and director general of Zimbabwe’s Central Intelligence Organisation, in his address to the delegates, according to minutes seen by the Mail & Guardian.

Bonyongwe said the poaching and trafficking activities are being conducted by sophisticated transnational criminal networks and that, apart from threatening “the security of the countries where these activities are carried out”, poaching has also negatively affected wildlife-driven tourism. He warned that, despite the implications for national security, poaching and wildlife trafficking had not received enough attention.

Cattle rustling, poaching and wildlife trafficking
The meeting recommended among other things “conducting operations to disrupt the supply chain”.

The Nigerian delegates said that “there was evidence to suggest that terrorist organisations derived a great deal of funding from poaching and trafficking to finance their activities”. They also told the conference that cattle rustling had evolved into a sophisticated and efficient organised criminal activity resulting in the killing of 322 herders across seven states of Nigeria last year and the theft of 60 000 cattle in the same period.

The delegation from the newly independent but conflict-ridden South Sudan accused the Ugandan rebel group LRA of taking advantage of the insecurity generated by decades of civil war to engage in “rampant poaching and illicit ivory trade in the country”.

The DRC officials also told the meeting that their vast and porous borders had provided a perfect opportunity for Rwandan and Congolese militias to operate in some of the parks in the east of the country.

Although not affected by terrorism, Zimbabwean and South African delegates expressed concern over the escalation of poaching and wildlife trafficking. They said that, at an estimated $23-billion, the poaching of wildlife has become the fourth-largest illicit trade worldwide after drug trafficking, counterfeiting and human trafficking.

The Zimbabwean delegation said poaching and wildlife trafficking is on the rise despite government efforts to contain it and that poachers were getting more sophisticated, conducting their activities through vast networks and routes. In the past year more than 300 elephants and other animals were reportedly killed in Zimbabwe by cyanide poisoning.

The South African delegation said that poaching and trafficking of wildlife products in South Africa takes place in the context of an escalation in the smuggling of natural resources.

They said rhino poaching was up from just 13 incidents in 2007 to 1 004 in 2013. The syndicates had become more sophisticated and use powerful weapons such as “military-grade helicopters, automatic weapons, night- vision equipment and other advanced tactical gear”.

Among other recommendations, Bonyongwe called on Cissa members to introduce specialised training courses for park rangers and international collaboration and intelligence sharing. Other participants also recommended dialogue with foreign governments, particularly China, Vietnam and Thailand, which were identified as some of the major destinations of ivory products.

There was also consensus on the need to fight against corruption in security agencies, wildlife authorities, immigration and port and border control authorities to ensure that they do not aid and abet trafficking.