Zim govt ‘sells out’ to China 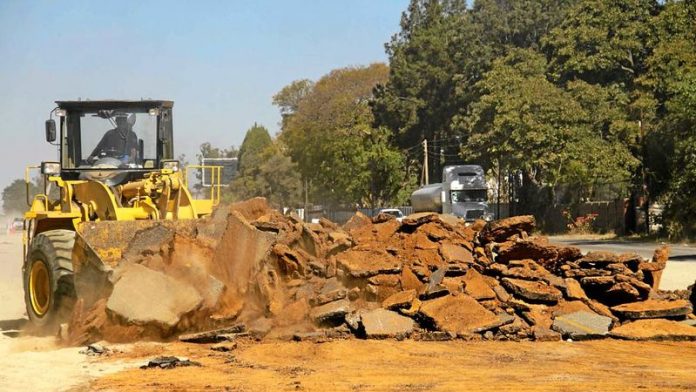 Desperate for funding from the Chinese government, Zimbabwe is planning to sideline the State Procurement Board and award government infrastructure projects to Chinese state companies without going to tender, the Mail & Guardian has learned.

The board, which some government officials believe is riddled with corruption, is in charge of all tenders for every government ministry.

Government officials have this week, ahead of a state visit by President Robert Mugabe to China, made the offer to the Chinese state companies, particularly in power generation, in return for funding.

But the government is struggling to raise cash, even for civil servants’ salaries, and is seeking a $4-billion rescue package from Beijing.

Despite three visits to China by Finance Minister Patrick Chinamasa, the Chinese have been reluctant to release funds because of the risk associated with the country.

Rescue package
Officials in the ministries of finance and economic development and foreign affairs told the M&G this week that the new plan was devised after they realised China was reluctant to release a rescue package.

The country is now asking the Chinese to fund new and existing capital projects under a build, operate and transfer basis, or other methods that would ensure the country pays for the projects over a long period, and made assurances that the State Procurement Board would not be involved.

The Zimbabwean government will push the plan when the Joint Zimbabwe-China Permanent Commission meets in China next week. Senior government officials said Mugabe would attend some high-level meetings to seek the package.

The permanent commission is headed by the two countries’ foreign ministers and discusses issues of mutual interest including security, politics, trade and economic matters.

The Zimbabwean half of the commission, part of which is already in China, has resolved to ask their Chinese counterparts to assist in brokering a deal that would see the tender process being skipped and Chinese state companies taking over the funding and implementation of the country’s major projects.

Some of the existing projects earmarked for takeover were previously awarded to companies – including some from China – but have not progressed amid allegations that the State Procurement Board had awarded tenders to companies without the capacity to see them through.

It is in this context that Zimbabwe will push for China to take over the implementation of the projects.

Officials said Mugabe would still push for the $4-billion rescue package, as he sees a financial package as being crucial for stabilising Zimbabwe’s worsening economy.

“Zimbabwean officials in the Joint China-Zimbabwe Commission have resolved to seek the assistance of their Chinese counterparts in bringing that country’s state companies to take over some of the tenders that have been awarded to companies who have so far failed to implement the projects,” said a senior official in the ministry of finance.

He added: “The immediate focus is on the proposed solar power projects that were awarded to three companies at the beginning of the year.

“Zimbabwean officials want the Chinese state companies to take over the construction of the solar power projects given by the board because of fears there is all likelihood of collusion between the board and the winning companies, which will result in the government being prejudiced [fleeced] of millions of dollars. There is also a growing belief that the companies have no capacity to carry out the projects, but will simply subcontract to others.”

Chinamasa and Foreign Affairs Minister Simbarashe Mumbengegwi could not be reached for comment. Chinamasa was said to be already in China to negotiate the deals and prepare the groundwork for Mugabe’s visit.

The foreign affairs permanent secretary, ambassador Joey Bimha, confirmed the joint commission would meet soon. He did not confirm whether there were moves to get the Chinese to take over the solar projects, but said the Zimbabwean delegation and their counterparts would identify projects the two countries could co-operate on.

“As you know, the Chinese do not give money directly, but they can assist by undertaking projects in Zimbabwe. So this is what the ministers will be negotiating for,” said Bimha.

Zimbabwe relies on hydroelectricity generated at Lake Kariba as well as coal-powered plants in Harare, Bulawayo, Hwange and Munyati. But the plants are not producing enough electricity and in some cases consumers have to endure up to 12 hours of load-shedding a day.

But there are concerns that the three companies have no capacity. The companies have also pushed up the project cost to $240-million from $183-million, which the government says is too expensive.

Only last month, the government cancelled a billion-dollar tender awarded to China Machinery Engineering Company for the expansion of Hwange Thermal Power Station. It was subsequently given to Sino Hydro, also a Chinese company, after the board realised a year later that the first company did not have funds to implement the project.

Zimbabwe Power Company is a subsidiary of the Zimbabwe Electricity Supply Authority, charged with electricity generation. Its spokesperson, Fadzai Chisveto, failed to respond to questions from the M&G.

Government officials this week said Chinamasa’s attack was informed by his desire to justify the awarding of projects to Chinese state companies.

“When it comes to tenders, something which I have noticed and which worries me is the dominance of briefcase businesses in the tender system,” Chinamasa said.

“People come to bid yet they do not own anything … We have to do due diligence on those who tender and find out where they are going to find their supplies. We have to enhance the public procurement legislation and governance structures to minimise distortions, that is, the role of middlemen and collusion [with the State Procurement Board] that increases the cost of doing business and also reach out to a broader supplier base.”

Earlier this month, the comptroller and auditor general exposed in a report that all employees at the board have no contracts, and are employed on the basis of offer letters alone.

The pandemic has forced us indoors and using more data than ever before, putting more strain on the environment
Advertising