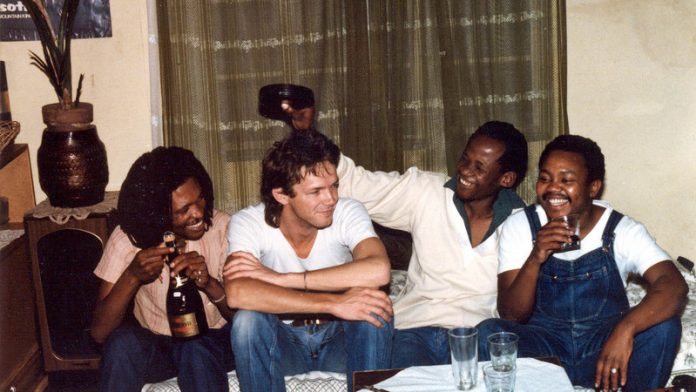 ‘Dit was ‘n kak tyd; dit was ‘n kwaai tyd [It was a shit time; it was an hectic time],” wrote Afrikaans musician Koos Kombuis, summing up South Africa in the 1980s and the environment that prompted Lloyd Ross to hit the road with a caravan reassembled as a mobile recording studio.

Travelling the length and breadth of South Africa and across its borders, Shifty Records — so named for its itinerant status — became a lifeline for artists whose music spoke of the troubled times and inhumane regulations of a country in turmoil. “How do I live in this strange place?” sang James Phillips, recording as Bernoldus Niemand — one of Shifty’s earliest releases.

For the record label, the answer to that question was: find artists playing music that matters, record it and then try to get that music heard.

Easier said than done. The airwaves were censored and neatly compartmentalised, with radio stations for different races and languages. Apartheid security agents monitored artists who were targeted as troublemakers, and on weekends uniformed police patrols ensured that live performances didn’t cross the “colour bar”.

Amid this atmosphere of fear and loathing, however, bands such as Ivan Kadey’s National Wake (South Africa’s first multiracial punk-reggae protest band, formed after the 1976 Soweto uprising) and James Phillips’s earlier group, Corporal Punishment, flouted the rules with songs about political injustice. Ross was inspired, joined forces with Kadey, and Shifty was born. It was 1983.

The first band Shifty recorded was Sankomota, a Lesotho-based trio producing an edgy, earthy mix of jazzy funk-rock, reggae and traditional African music. Two of its members were barred from leaving Lesotho by the apartheid state for having played for another group deemed subversive. Ross and his housemate, musician Warrick Sony, hitched up the caravan and left their tin-roofed house on a desolate property beside a disused mineshaft in Jo’burg. Their leaseholder was the late Jackie Quinn, killed in 1982 along with 42 other people in the infamous Maseru raid by the South African Defence Force. It was an unlikely time for music to flourish.

“The evening before I left, I was in a complete state of panic,” recalls Ross. “This was something I’d never done — driving over borders with a recording studio in a caravan to put down a band in another country. Things like that either fall apart or they fall into place — there’s no middle ground.

“We found old Lesotho Radio premises standing completely derelict. We pulled the caravan up next to it, put the band in there and recorded. That became one of the most evergreen recordings Shifty ever did: it still sells today.” He pauses for a moment as the days and years catch up. “Sjoe. It’s 10 years since Frank [Leepa, the guitarist] died, the last of that original band. Moss [Nfoko, drummer] and Maruti [Selate, bass]  passed away some time earlier. It was a beautiful record. Pivotal and iconic, like we’d done something to help change a country that wasn’t what it should be.”

Sony takes up the story: “We got back to Johannesburg and every single radio station refused to play the music, because the band mixed their languages: English, Sesotho, isiZulu and some Swahili. There were radical racial purity laws that governed state broadcasting, which was the only broadcasting there was. If radio wouldn’t play it, no record company would release it. There was never supposed to be a Shifty Records, just Shifty Studios, but we had to make something to release the music.

“In the end, we got Sankomota played by Tim Modise on Radio Bop [broadcasting out of the nominally independent ‘homeland’ of Bophuthatswana], who became a big fan, and on a speciality show by Chris Prior on Radio 5. Everyone who knew, knew where you could get the cassettes, under the counter.”

The Shifty catalogue started with anti-establishment punk and protest music, but grew to more than 60 released records and a remarkable diversity of artists. There was jive, folk and acoustic; there were soundtracks for Johannesburg’s Market Theatre Company and recordings of workers’ choirs for Fosatu (the Federation of South African Trade Unions), South Africa’s first trade union federation.

There was rock ‘n roll, the early sounds of Cape-based goema-rock and Beat poet-influenced “cut-up” recordings; there was jazz and traditional African music and spoken-word poetry; and there were angelic vocals ranging from Vusi “The Voice” Mahlasela to Jennifer Ferguson.

“Once I had the caravan, I started looking for things to record, usually people that were not in a commercial groove but were singing about what was going on in the country,” recalls Ross. “It started as a labour of love; I was funding it from the work I did in the film industry and didn’t really have high overheads. I spent what I earned to keep the company going. We had to keep inventing.

“Mzwakhe Mbuli [dubbed ‘the People’s Poet’] was banned from distribution, but not possession, and we found a way to manufacture cassettes — blank-label cassettes. He was very popular at political rallies, so people knew there was this recording and it sold like hot cakes. It was our first gold record, although we couldn’t ever say that.”

Shifty was also pivotal in the Voëlvry tour, the high point of the boere-punk movement. Voëlvry has been widely documented as an angled nail in the apartheid coffin — young Afrikaners using music and wild concerts to rebel against the National Party system. It was also genuine rock ‘n roll excess and road-tour chaos.

“You want anecdotes?” asks Ross. “Gary Herselman, who was called Piet Pers [Pete Purple] then, became a dog for the tour. Piet wasn’t acting like a dog; he became a dog. When they stopped somewhere, he’d sit under tables and bite people’s ankles. For the whole tour. If there were dogs around, he’d curl up with them and sleep with them. Finally, after going all around the country like that, when they got back to Jo’burg and sighted the Hillbrow tower, Piet let out this huge howl and suddenly became a person again.”

In 1984, trombonist Jannie “Hane-poot” van Tonder met Shifty artists The Softies and was soon recording with a number of musicians, including Voëlvry lynchpin Johannes Kerkorrel and his Gereformeerde (Reformed) Blues Band. “It was a totally different mind-set,” he recalls. “I was in the army band, playing at funerals for people killed in the border war. These were the first okes I met who actually wrote their own stuff. They weren’t just about the right notes — it was about what they were saying.

“I remember when Lloyd first got that demo cassette from André [Letoit, aka Koos Kombuis]. I was blown away. There was nothing that was even vaguely like that before. It changed everything for me, hearing that … full-on Afrikaans protest music from a well-educated Afrikaner, who was very sharp and able to express himself using the colloquial idiom. It was a revolution, one that wouldn’t have happened without Shifty.”

And yet 30-odd years later, this important music was in critical danger: it was dying. Each album started with a set of master tapes, recorded on old reel-to-reel multi-track magnetic tape. At around 200m of tape for an hour’s worth of music, that’s a massive volume of material, which, as time passes, faces physical problems such as the tape stretching and breaking.

Far worse is the degradation of the ferromagnetic material that captured the precious sounds. Once that’s gone, it’s gone forever. It became imperative to have the master tapes properly archived, and the clock was ticking…

Enter the South African History Archive, an independent human rights archive dedicated to documenting and providing access to material that relates to past and contemporary struggles for justice. The archive took on the task of obtaining funding and staff to painstakingly transfer each Shifty tape on to the audio equivalent of a high-definition digital format.

The archiving process also entailed cataloguing the musicians involved in making each recording, and preserving data such as dates and techniques — information crucial for later academic purposes.

As Professor Michael Drewett of Rhodes University’s department of sociology puts it: “[Shifty’s] music reflects important aspects of life in South Africa over a pivotal decade of transition. It is crucial that this music and history is not lost and can continue to impact on our sense of identity.

“We use records of defiance and resistance to show stories that would otherwise not be known,” says the archive’s director, Catherine Kennedy. “With the Shifty archive, there are many interesting angles: the way music and identity and politics collide, how performances and music can activate young people, and how the Shifty concerts were part of the End Conscription Campaign, one of the most effective campaigns ever.”

The aim is also to bring the music to life once more, through real-world and online exhibitions for the global audience.

No one could be more relieved than Lloyd Ross. “We’d never be able to find the money or the months and months of time it would take to digitise and annotate everything, so this archiving is the best thing that could happen,” he says. “With the masters on a more stable format now, the music is safe — so we can relax.”

And with that, the revolution can continue, too.

Shifty September: Celebrating 30 Years of Seditious Sounds includes exhibitions, film screenings and talks at Alliance Française in Parkview, Johannesburg, plus a concert at the Bassline on September 24. Visit shifty.co.za and saha.org.za.