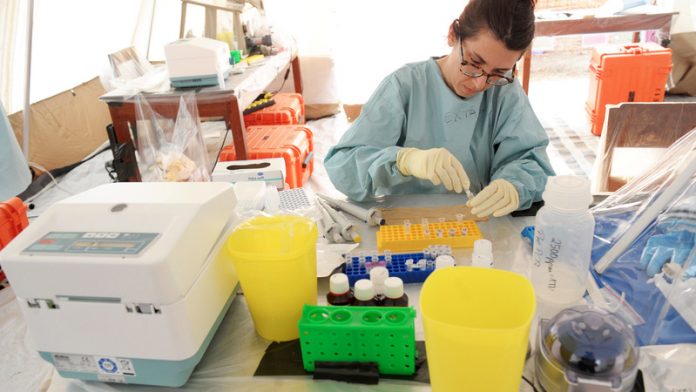 Scientists have created the newest map of places most at risk of an Ebola outbreak and say regions likely to be home to animals harbouring the virus are more widespread than previously feared, particularly in West Africa.

Understanding better where people come into contact with Ebola-infected animals – for example through hunting or eating bush meat – and how to stop them contracting the deadly disease, is crucial to preventing future outbreaks, the researchers said.

Ebola in animals
The Ebola virus, which can have a human mortality rate of up to 90%, is thought to be carried by bats or other wild animals and believed to cross into humans through contact with blood, meat, or other infected fluids.

These jumps by viruses from animals into humans are known as “zoonotic events” and were also the cause of major human disease outbreaks such as HIV and the H1N1 swine flu pandemic.

The new map, published on Monday as the death toll in the world’s largest Ebola outbreak in West Africa’s was almost 2 100, found that large swathes of central Africa as well as the western part of the continent, have traits of what the scientists called “the zoonotic niche” for Ebola.

“Up until now, there hadn’t been a huge amount of research, but there was one paper in which the at-risk area was much smaller,” he said in a telephone interview. “It didn’t predict, for example, the area in Guinea where this current outbreak first started.”

Previous Ebola epidemics have been in central Africa, and a current outbreak in Congo – separate from the one in West Africa – has infected about 30 people in recent weeks.

According to latest data from the World Health Organisation (WHO), almost 2 100 have died from Ebola in the current West Africa outbreak, which has infected at least 4 000 people in Guinea, Sierra Leone, Liberia, Nigeria and Senegal. The WHO says it will take months to bring the disease under control and has warned there could be 20 000 cases before it is stopped.

Golding’s study, published in the journal eLife as a collaboration by scientists at Oxford and University of Southampton in Britain, Canada’s University of Toronto, and HealthMap at Boston Children’s Hospital in the United States, did not seek to map potential human-to-human spread, but focused on where there is a risk of animals infecting people.

It used data from the current outbreak as well as previously unmapped infections in bats, primates and other animals.

Contact with infected animal
Previous studies have shown that the first patient in an Ebola outbreak is probably infected through contact with an infected animal. The so-called “index case” in the current Congo outbreak was, according to the WHO, a pregnant woman from Ikanamongo Village who butchered a bush animal that had been killed and given to her by her husband.

While the West Africa spread is vast – the world’s largest ever – long-lasting and deadly, the scientists noted that this is almost entirely due to person-to-person spread, and said Ebola outbreaks are still relatively uncommon events.

“Although the disease may be found in animals across a wide area, outbreaks are still very rare; very few animals in this region have detectable infections, and it is extremely rare for humans to catch the disease from them,” said David Pigott, one of the lead authors of the study.

To find areas most at risk, the team identified the predicted distribution of bat species suspected of carrying the disease. They also mapped environmental factors to find suitability for Ebola transmission from host animals to people.

These data were combined with detailed data on locations where humans have been infected by wild animals and where infected animals have been identified.

“This work was a first step towards understanding where outbreaks of the disease might occur in the future,” Golding said. “To prepare for future outbreaks and to deal with the current one we need to understand how human movements cause the disease to spread once it has entered the human population.” – Reuters