Zim: Now the Russians are coming too 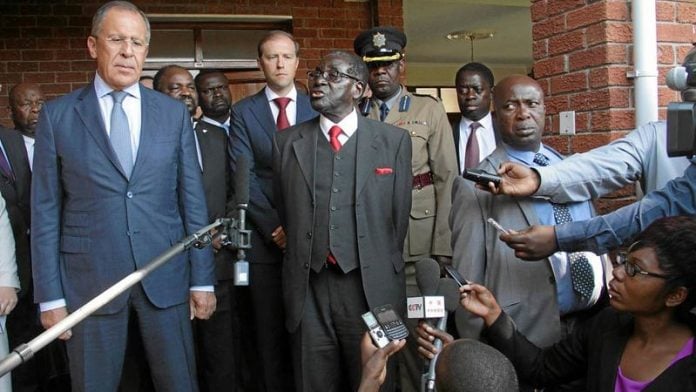 With Zimbabwe’s largest single foreign investment deal in the bag, President Robert Mugabe on Tuesday stood outside his rural home and thumbed his nose at the Western world that has isolated him for years.

He was about to sign a $3-billion platinum mine deal with the Russians, the biggest ever single investment by a foreign investor since independence, just weeks after he secured billions of dollars’ worth of infrastructure deals with China.

An agreement has also been reached for the supply of military equipment to Zimbabwe, and a Russian firm will also begin prospecting for diamonds in Zimbabwe.

It has been a good month for Mugabe’s “Look East” policy, and the nonagenarian is basking in the glory and letting his critics know he does not need them.

“We couldn’t do it with enemies. No. We can only do it with our friends,” Mugabe said, after hosting Russian Foreign Affairs Minister Sergey Lavrov at his home in Zvimba.

Russia and China were the “two greatest friends” and “two main pillars of support” for Zimbabwe’s liberation struggle, Mugabe said, and they remain allies in the fight against Western interference.

In turn, Lavrov called Mugabe “a legend, a historic figure”, and pledged more economic co-operation with Zimbabwe. Russia has agreed to invest $3-billion in a new platinum mine in Darwendale, just 20km from Mugabe’s rural home.

Under the platinum deal, the countries will form a new consortium, Great Dyke Investments (GDI), to lead the investments in platinum and other minerals. GDI is made up of Pen East Investments of Zimbabwe and Afronet, a group of three Russian partners.

The $3-billion will go into developing the Darwendale mine and the construction of a smelter, said Hesphina Rukato, the new company’s chief executive.

“There is a provision for the establishment of a refinery subject to ongoing discussion. This will bring the total investment level to $4-billion,” said Rukato, a former deputy head of the New Partnership for Africa’s Development.

“I would like to point out that Alrosa has come up with a proposal to the Zimbabwean side to extend expert assistance to Zimbabwe in the field of organising the system of sorting, valuation and marketing of its diamonds,” Russia’s Industry and Trade Minister Denis Manturov said.

Zimbabwe’s alliance with Russia and China was sealed in the struggle for independence, when the two countries supported liberation war fighters. When Western nations brought a resolution before the United

Nations Security Council to have sanctions imposed on Zimbabwe in 2008, Russia vetoed it. As Russia faces sanctions over its role in Ukraine, Mugabe stands by Vladimir Putin.

“Take back to president Putin that we feel with him that those who are imposing sanctions on him had done so on us,” Mugabe told Lavrov.

The political ties are now being turned into billion-dollar deals that the Zimbabwe government says will save the country’s economy.

The Russian deals, Mugabe said, “will see us rise as a nation”. He added: “It will see our performance, socioeconomic, also rise as greater development takes place.”

The Darwendale mine will see peak production at 800?000 ounces a year, which would see Zimbabwe producing over one million ounces a year in five years’ time.

Construction begins
The first phase of the project, which ends in 2017, will see construction of a $600-million opencast mine and a concentrator. In the second phase, the smelter and concentrator will be extended, requiring investment worth $1.2-billion.

Construction has already begun at Darwendale. Equipment was seen by the Mail & Guardian being moved on to the new site this week. At the launch event on Tuesday, hundreds of excited locals turned up. The government says the project will create 8?000 new jobs.

At the commissioning of the mine, there was no mention that a South African company, Amari Platinum Holdings, had won an order to seize about $45-million of Zimbabwe’s diamond sales in Antwerp. The company, which went to the International Criminal Court to claim $500?000 from Zimbabwe, says government kicked it off part of the land the Russian mine is now based on. Amari says it had already had a licence and had invested much money into the prospecting the land.

“The advent of the Russians in Zimbabwe’s platinum scene will bring an additional 250?000 ounces to our current output of 430?000 ounces within the next 36 months,” Mines Minister Walter Chidhakwa said.

Deal for military hardware
This week, Russia and Zimbabwe also signed a deal for the supply of military hardware. On Monday, Defence Minister Sydney Sekeramayi and army general Constantine Chiwenga signed an agreement with Rosonobornexport, a Russian state-owned military hardware firm. The deal will allow Zimbabwe to secure spares, which has been difficult because of Western sanctions against the country, Sekeramayi told reporters.

“As you know, our defence forces have been equipped largely with weaponry from Britain and other Western countries and we are under sanctions from these countries and we cannot even buy spare parts from them. We have to look elsewhere.”

Critics of the latest deals fear the Zimbabwe government, desperate for investment, may be negotiating the sell-off of state assets.

“The Chinese are in Zimbabwe already and now the Russians too are coming; and they are coming for one purpose and that purpose [is] to join in the pillage of the country,” said political commentator Wilbert Mukori.

Similar deals with foreign investors have not benefited the economy, among them the diamond mine contracts and a stalled investment in New Zim Steel, the country’s largest steel maker by Indian investors.

But government officials insist this is a triumph for Mugabe’s policy of looking to Russia and China to offset the loss of investment from the West.