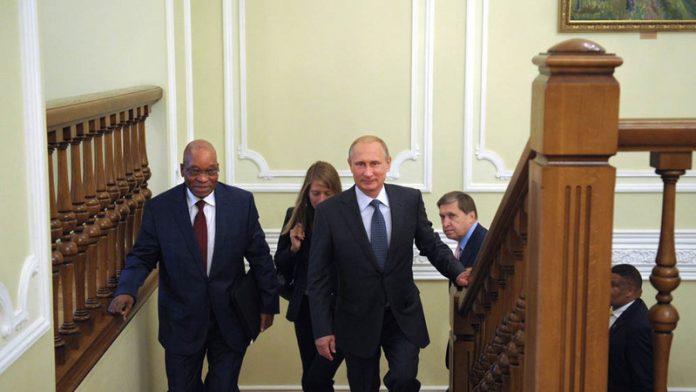 The Russians are coming. The nuclear deal with Russia is to dominate the agenda when the South Africa-Russia joint intergovernmental committee on trade and economic co-operation meets next month.

Even though the South African government insists it has not entered into the procurement phase for the nuclear fleet, it has become clear that Russian President Vladimir Putin managed to sway President Jacob Zuma and Energy Minister Tina Joemat-Pettersson into giving Russia the entirety of the deal.

Zuma and his most trusted Cabinet ministers went against the strict advice of the national treasury and his senior advisers when a nuclear energy “agreement” was signed with Russia last month.

Two sources who also advised against it revealed this week to the Mail & Guardian that an initial bid made by Russian nuclear company Rosatom last year was rejected by the treasury and a number of Zuma’s advisers. A third credible source who was close to the negotiations confirmed their version of events.

The treasury this week did not deny advising against the initial Russian proposal.

“Nuclear would be a substantial financial commitment and government can only make that kind of commitment after careful and ­thorough-going modelling and an affordability assessment,” said spokesperson Jabulani Sikhakhane.

He said they had yet to discuss how the treasury would pay for nuclear energy.

South Africa plans to enhance its energy mix by creating 9.6 gigawatts of nuclear energy by 2030.

The M&G spoke to three highly placed sources – all of them indicated that:

One source close to the nuclear talks said the signing of the agreement was a result of about two years of courting by the Russians.

A pitch was made during a working visit by Putin to South Africa in March last year where the discussion on Russia’s involvement in South Africa’s was initiated.

Keeping mum
While Zuma and his government remained mum on the matter, his Russian counterpart was more forthcoming. “We have enormous potential for developing co-operation in the energy sector, first and foremost in nuclear energy,” Putin said at the time.

“Russia is offering its help to South Africa not just in building individual units but in developing the country’s nuclear industry as a whole – from resource production and building a nuclear power plant and research reactors to designing and manufacturing its own nuclear power equipment. Naturally, all this involves credit assistance from the Russian side and training of specialists.”

The two sources the M&G spoke to said government officials were told to consider the pitch and make recommendations.

Putin’s press service pre-empted the meeting last May, saying Zuma would discuss co-operation in the nuclear industry on his then-working visit to Sochi.

No mention of nuclear
Zuma took eight of his Cabinet ministers with him on that visit, including then-energy minister Dipuo Peters. In a press statement issued at that time, Zuma’s spokesperson Mac Maharaj did not mention any nuclear energy agreement.

Two days before that trip Peters lobbied hard in Parliament in favour of nuclear energy.

“The department will continue to work towards the roll-out of the nuclear programme, including reaching a final investment decision towards the procurement of nuclear power plants,” she reportedly said.

It was then that the Nuclear Energy Corporation of South Africa and the National Nuclear Regulator were allocated R710-million to examine, among other things, the development of nuclear energy.

It was on Zuma and his ministers return when, according to the two sources, the treasury advised against the costly deal.

A source indicated that the matter appeared to have been shelved, but clearly nobody told the Russians.

“Russia is ready to contribute to the establishment of a nuclear power industry in South Africa; our economic operators interact in the area of new and renewable energy sources,” Lavrov said in a statement at the time.

Less than a week later, at the G20 summit in Saint Petersburg, Zuma and Putin appeared to be thick allies. It was then when Putin hailed Zuma as a champion of “small nations” following discussions on Syria.

The M&G has previously reported that Zuma summoned then-finance minister Pravin Gordhan, to a meeting on the second day of the summit and asked Gordhan for the necessary financial commitments from the treasury. Gordhan apparently declined and warned Zuma such a step would be unwise.

In June this year, the relationship between the two countries was reaffirmed. The nuclear agreement was brought up during a phone call Zuma made to Putin. The Russian embassy in South Africa noted of the call that: “Putin and Mr Zuma discussed a number of current matters concerning development of the two countries’ bilateral relations and strategic partnership, and agreed to continue their contacts.”

In July, an undertaking was then given that South Africa’s nuclear fleet would be given to Russia, costing an estimated R1-trillion.

Brics summit
The M&G reported last month that Zuma personally negotiated the nuclear deal with Putin on the sidelines of the Brics (Brazil, Russia, India, China and South Africa) summit in Brazil and finalised details of the pact during his highly secretive visit to Moscow in August.

Then, on September 23, Rosatom and the department of energy released a joint statement announcing that Energy Minister Tina Joemat-Pettersson signed a nuclear agreement with Rosatom.

The announcement raised wide public outrage and criticism from opposition parties who demanded transparency on the matter.

The department this week stuck to its insistence that it had not agreed to procure the nuclear power plants from Russia, saying the procurement process had yet to be opened.

The department sought to allay concerns by announcing last Friday that Zuma granted Joemat-Pettersson authority to sign a nuclear agreement with France. The minister signed the agreement in Paris on Tuesday.