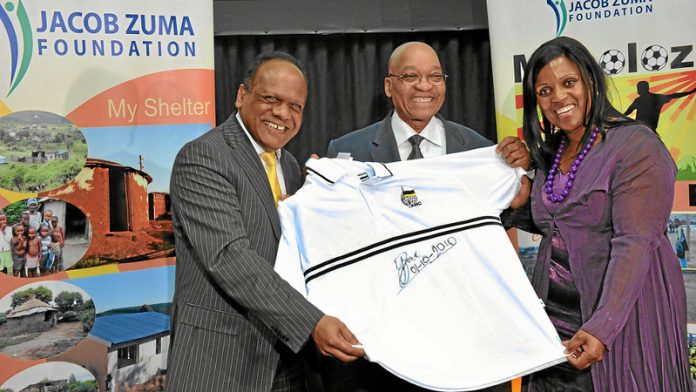 Dudu Myeni, the chairperson of SAA, appears to think her intimate relationship with President Jacob Zuma makes her untouchable. So far, she has been right.

This week Myeni seemed to defy Public Enterprises Minister Lynne Brown, who was quoted at the weekend as saying she had instructed her to reverse the suspension of Monwabisi Kalawe, the SAA chief executive.

Kalawe remained on suspension this week.

Brown told the Mail & Guardian on Thursday that she had demanded to “hear from them [the board] why they are not listening to me” and expected Myeni to say so in writing.

“I will receive the letter today,” she said. “We can’t have a situation where the CEO is changed every time we have a new board … I could not see any reason to suspend him a week ago. I need to know what changed.”

Relationship rumours
Rumours of a romantic relationship between Zuma and Myeni, circulating since the latter’s rise to prominence, were not denied this week. This raises the question of whether the president has used the state-owned airline to provide Myeni with “sheltered” employment despite her allegedly erratic leadership.

Brown retained only two non-executive directors – Myeni and a close associate of Myeni’s, Yakhe Kwinana – when she appointed a new interim board two weeks ago with the express mandate to stabilise the failing national carrier.

She said retaining them was for “continuity”, but seemed to ­acknowledge in a Sunday Times interview that this was on “advice” from the president.

Presidential spokesperson Mac Maharaj did not respond to written questions.

Myeni said it was “tantamount to hyperbole and completely untrue” that she behaved in a manner suggesting she believed Zuma protected her. She denied that the relationship, which she described as friendship, gave rise to a conflict of interest with her public duties, as it was “ring-fenced”.

Founding directors
The relationship between Zuma and Myeni is, in some respects, clear for all to see. She is the executive chairperson of the Jacob Zuma Foundation, a nonprofit company registered in September 2008. She and the then president-in-waiting were the founding directors.

The foundation boasts programmes in housing, education and sports development. Zuma resigned as director when he became president in 2009, but the foundation names him as its patron and its website shows him participating in its activities.

Myeni appears to have been already integrated into Zuma’s family, including financially, in the early 2000s.

Financial records collated by prosecutors for the corruption trial of Zuma’s financial adviser, Schabir Shaik, reflect several deposits that Myeni made in 2002 and 2003 to the account of Duduzile Zuma, one of the president’s daughters.

And when the Scorpions subsequently pursued corruption charges against Jacob Zuma, an August 2005 raid on his attorney, Michael Hulley, produced evidence of recurrent payments from Zuma to Myeni.

In a schedule of records seized in the raid, amaBhungane identified 10 cheques drawn on Zuma’s Absa account in Myeni’s favour. These were interspersed with payments to schools and colleges where Zuma’s children were studying, payments to the body corporate of his Killarney flat in Johannesburg – and payments to other women in his life.

Going by cheque number, Myeni was often paid shortly after Tobeka Mabhija, the fiancée whom Zuma married in 2010.

There is evidence that a romantic relationship continued after Zuma became president.

Home visits
A former close associate of Myeni’s told amaBhungane that he accompanied her to Zuma’s official Pretoria residence, Mahlamba Ndlopfu, after 2009.

“I used to go with her to the president’s residence and there won’t be any of the wives there … When we got there she would cook for him – she knows what kind of food he likes.”

The former associate, who asked not to be named, said that, although there were no overt displays of affection, “the more we visited the house, the more I saw that this is a relationship … In most cases I left her there. I don’t know what happened afterwards.”

A source sympathetic to Zuma, who also asked not to be named, did not deny that the relationship had been romantic but was adamant that they “don’t have a relationship at the moment”.

He said there was a “real problem” with people abusing Zuma’s name for their own advantage and claimed that Myeni did this. “She will drop it in, suggesting that she has just returned from a very intimate meeting with the president … She is, of course, the CEO of the Jacob Zuma Foundation … but she’s a disaster for SAA.”

The source said Zuma might be happy to see Myeni leave SAA. It was “a good thing she has now defied Lynne Brown”, as this would provide an opportunity to remove her.

‘Son’ of Zuma
He claimed that Myeni’s 28-year-old son, Thalente Myeni, had also abused the close relationship with Zuma. “There was even an occasion where he went to an embassy and demanded an instant visa on the basis that he was the president’s son.”

Thalente appears to have been integrated into the Zuma family, much like a stepson to the president.

Online records suggest, and a second acquaintance of the Myeni family confirmed, that after 2009 Thalente lived at Zuma’s family home in Forest Town, Johannesburg. The Forest Town address is also reflected as the physical address of two companies that Thalente became director of in 2009 and 2010.

He moved to a R5.5-million Sandton apartment last year. The luxury address reflects the explosion in company directorships he has notched up since 2009.

His line of business was not immediately clear this week but his operating company lists the same Sandton address from which companies of Duduzile Zuma and her husband, Lonwabo Sambudla, operate. A receptionist told amaBhungane that Thalente “sometimes” came to the office.

Thalente terminated the call when amaBhungane asked him about the Myeni family’s relationship with Zuma. He did not answer subsequent calls or an SMS.

Family occasions
Name-dropping by the Myenis or not, Zuma attended the wedding of Myeni’s daughter, Thandeka Memela, at a game reserve in Hluhluwe in September last year.

The president is understood to have made a personal and somewhat lengthy speech, during which he came across as “very charismatic”.

Myeni said this week: “It is a matter of public record that I am the chairperson of the Jacob Zuma Foundation and it could reasonably be assumed that I am well known to the president and his family.

“I have been associated with the Zuma family as one of their many friends, as a follower in respect of my political history and also in my capacity as the chairman of the fund. I am proud of these associations and they are well known.

“These relationships do not create or occasion any conflict of interest. They are disclosed … for reasons of transparency and ring-fenced from my public duties.”

Is Myeni’s next move to the Central Energy Fund?

A new board position in a state-owned entity might be on the cards for embattled South African Airways (SAA) chairperson Dudu Myeni.

A source close to the CEF (Central Energy Fund) board told amaBhungane that a process to appoint Myeni to its board is underway – causing surprise among existing directors in light of her performance at SAA.

On Wednesday, amaBhungane phoned CEF company secretary Abdul Haffejee to ask him what stage the Myeni appointment process had reached and why board members might be unhappy.

He said: “At this stage we’ve received correspondence, but I’ll be able to respond formally on what you send me [by email].”

CEF spokesperson Mandla Tyala referred the emailed questions to Energy Minister Tina Joemat-Pettersson, who is responsible for CEF board appointments.

Joemat-Pettersson’s spokesperson, Zodwa Visser, said: “The office of the Minister is not aware of any such process.”

AmaBhungane reached CEF directors Busi Mabuza and Xolile Mtwa by phone. Mabuza said she was “out of the loop” and had not heard anything about the appointment, and Mtwa refused to answer questions.