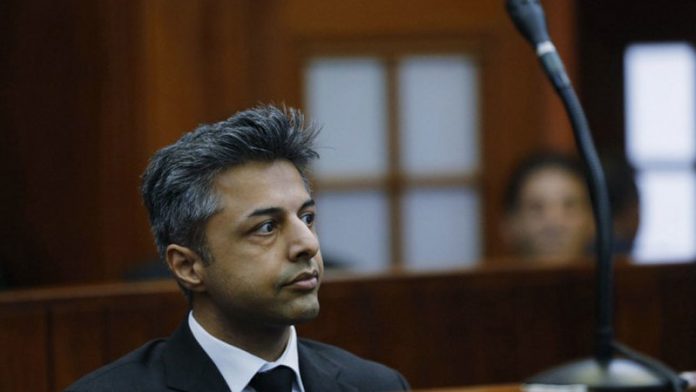 Police handed British businessperson Shrien Dewani his wife Anni’s wedding band and her expensive engagement ring before he flew out of South Africa, two days after she was found brutally murdered.

An engineer and part-time model, 28-year old Anni Hindocha was kidnapped on November 13 2010 during an inexplicable night taxi tour of crime-ridden Gugulethu township in Cape Town. Both Dewani and taxi driver Zola Tongo claimed they had been hijacked after they were released unharmed from the vehicle.

The honeymooner was found murdered the following day, killed with a single bullet to her neck. According to police, Hindocha’s wedding band was discovered under her body when the mortuary came to lift her out of the silver VW Sharan taxi in Khayelitsha township on the Cape Flats.

What first triggered police suspicion around Dewani was his conflicting versions of what happened to her rings during the hijacking, which only emerged when he attempted to recover his wife’s missing engagement ring from the vehicle.

But discrepancies in his version of events might never be resolved as Dewani’s trial in the high court in Cape Town took another twist this week.

Dismissal of the case
While he is charged with conspiracy to murder, murder, robbery, kidnapping and obstructing the administration of justice, Dewani has pleaded not guilty to all charges.

His defence team has applied for a dismissal of the case in a discharge application under section 174 of the Criminal Procedure Act, claiming a lack of evidence.

The National Prosecuting Authority has rejected the move to dismiss the case as it believes it has a strong case against Dewani.

Judge Jeanette Traverso has provisionally set down the application to be heard on Monday, unless she requires more time to consider both arguments.

Section 174 of the Act provides that if at the close of the prosecution’s case, the court believes there is no evidence that the accused committed the offence, it may return a verdict of not guilty. If this happens, Dewani could fly home a free man.

Three South Africans have already been sentenced to long terms of imprisonment for Hindocha’s murder. Taxi driver Tongo struck a plea bargain with the State and was given 18 years in prison; hitman Xolile Mngeni died of a brain tumour while serving a life sentence after pleading not guilty; and his co-accused and childhood friend Mziwamadoda Qwabe received 25 years after he was given a plea bargain with the state.

Tongo, Qwabe and middle-man Monde Mbolombo, who was granted immunity in return for his testimony in court, have all fingered Dewani as the mastermind behind the plot to kill his wife.

Defence attorney William da Grass represented Tongo, who was the only accused to have contact with Dewani. However Da Grass does not believe the section 174 application will succeed.

Credibility
“From the snippets I have seen, I doubt that the section 174 will succeed. However, I anticipate that the defence will close their case without leading any evidence if the application is dismissed.  Alternatively they will call other witnesses besides the accused,” said Da Grass. “One must remember that the tests are different. In the section 174 application, the court determines whether there is any evidence on which a reasonable court may convict. Credibility at that stage is not awfully important.”

If the defences closes its case, he said the question is whether the state has proven its case beyond reasonable doubt.

“The additional problem that the state may have is section 208 [of the Criminal Procedure Act]. For all intents and purposes, the state relies on a single witness, my former client, and if the court finds that his evidence has not been satisfactory in every material respect, it must acquit.”

One person who will surely be disappointed if Dewani walks free is Hawks lead investigator on the case, Captain Paul Hendrickse, who last week provided compelling evidence in court.

Hendrickse told how on the morning after Hindocha’s wife’s body was found, Dewani had called him to ask that he look for his wife’s engagement ring in the stitching of the seat of the taxi.

Dewani had booked to fly home two days after his wife’s body was found, and the police were still in possession of the taxi vehicle.

Hendrickse found the engagement ring in the stitching of the back seat of the taxi, just as Dewani had directed in his phone call.

Dewani statement
Yet in the first statement Dewani gave to police, at a time when police were still out searching for his kidnapped wife, he said he handed over his wife’s rings to one of the gunmen.

Incompetency in the case
This is the statement Dewani made to police on the evening of November 15 at the Hawks offices: “While my watch was being taken off, [I] recall my wife saying that she was hiding her wedding rings. Then at some stage later I recall trying to bargain with this male, saying if he let both of us go, he could have the wedding rings. My wife passed me something which I never saw but assumed it was the wedding rings. I gave it to the suspect.”

In his plea explanation to court at the start of his trial, Dewani for the first time made mention of the R10 000 and said it was to be used by Tongo to arrange a surprise helicopter ride he planned to take with his wife.

“If he had told me about the money or the helicopter trip, Mr Tongo would have become a suspect, Hendrickse told the court. “There would have been a motive for Mr Tongo to rob Mr Dewani, and in my investigation I would have been more focused on Tongo. As far as I can see, this version of Mr Dewani is fabricated,” said Hendrickse.

Traverso interjected abruptly: “That is merely your view. At the end of the day the court must decide that.”

Despite early police suspicions around his conflicting versions of of what happened to Hindocha’s rings, Dewani was allowed to return to his home in Bristol. So far the police had not made any arrests, and he was not yet a suspect.

It took the National Prosecuting Authority more than three years to succeed in its drive to extradite Dewani when he became a suspect, as a London court found he was suffering from debilitating depression, post-traumatic stress, suicidal tendencies and was unable to stand trial.

The Hindocha family was present at every hearing in Dewani’s extradition case in London, and they have flown to Cape Town to be present at the various accused’s numerous appearances in court.

The murdered woman’s family have listened while the defence team in the Dewani trial has repeatedly pointed to police incompetency in the case.

Long history of criminal activity
Yet within a few days of Dewani boarding a plane to return home, four men involved in the murder of Hindocha had been arrested.

Police got their first break in the case when Mngeni’s handprint was found on the vehicle. The unemployed Khayelitsha resident was quickly traced as he had a long history of criminal activity, including a pending case of murder and attempted murder.

At the onset of his trial in Cape Town, Dewani declared himself bi-sexual and confirmed that he had used male prostitutes, something he had previously denied through his now disgraced public relations representative Max Clifford. Once a celebrity himself, Clifford has since been jailed for eight years in Britain for sexually abusing four female teenagers.

Traverso ruled the evidence of Leopold Leisser, aka the German Master, as inadmissable as Dewani had already declared himself bi-sexual.

Dewani’s gay life
A practicing Hindu, Dewani’s gay life was a secret before the trial. The prosecution had intended to use Leisser’s evidence as pointing to a motive for the murder, as Dewani had allegedly spoken to him about his concerns around his pending marriage during his sessions.

Leisser was photographed after taking a trip up Table Mountain after he was no longer wanted on the witness stand.

As the law runs its course, the Hindocha family might never find closure over her murder. They might never find out why her husband would give conflicting versions about what happened to Anni’s rings, or why he never told police about the R10 000 in his wife’s bag.

The case might have proceeded differently if the text messages on Tongo’s cellphone, to and from Dewani, had been recovered. Despite seeking the help of Scotland Yard in London, investigators were never able to retrieve the deleted texts.

Whatever the outcome, Da Grass said there had been a fear Dewani would be railroaded when he came to South Africa.

“And you know what, our judicial system has been vindicated either way, convicted or acquitted,” he said. “It is time for all of the nay-sayers to really look inward.”