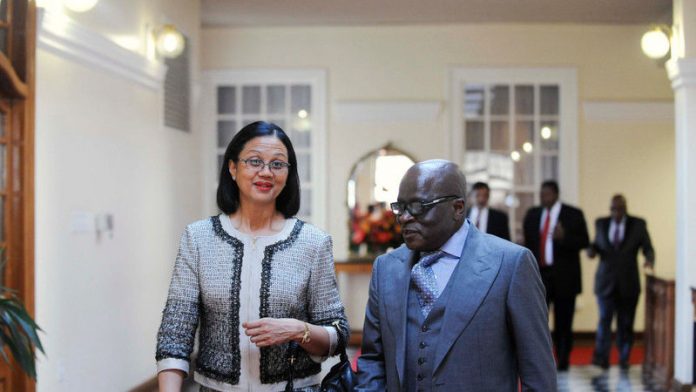 Energy Minister Tina Joemat-Pettersson has misled Parliament and should be suspended pending an investigation, the Democratic Alliance (DA) said on Monday.

“Reports indicate that the minister was involved in recommending and appointing Mr Tshepo Kgadima as chairman of the board of PetroSA,” DA MP Lance Greyling said in a statement.

However, when questioned about this in the National Assembly last week, Joemat-Pettersson flatly denied any involvement in Kgadima’s appointment. At the time she told MPs: “The appointment of a chairman was the responsibility of the board of PetroSA’s holding company, the Central Energy Fund (CEF).”

According to reports, Kgadima was allegedly involved in fraud that led to the loss of millions of rands by investors while he was CEO and president of LontohCoal.

The reports also state that Kgadima was recommended for the post of PetroSA chairperson – along with three other candidates – by Joemat-Pettersson, in a letter sent to CEF chairperson Sankie Mthembi-Mahanyele on October 10.

Greyling called for this to be investigated by Parliament’s joint committee on ethics and members’ interests.

“She has … clearly misled Parliament, and must be suspended in terms of the procedure to be followed during the investigation of allegations of misconduct and contempt of Parliament.”

He would propose a substantive motion at the next sitting of the House, possibly later this week, referring the matter to the committee.

‘Swindling’ investors
Greyling said Kgadima stood accused of “swindling more than 250 investors who allegedly put money into his company, LonthoCoal, between 2010 and 2012 for projects that did not exist”. His appointment was therefore irrational, and should be set aside.

“In fact, it is highly questionable that the minister applied her mind at all in recommending Mr Kgadima in the first place, further casting doubt over her judgement and ability to serve as a minister, as has previously been established by the myriad findings against her by the public protector.”

Joemat-Pettersson’s spokesperson Zodwa Vissers was not available for comment. – Sapa