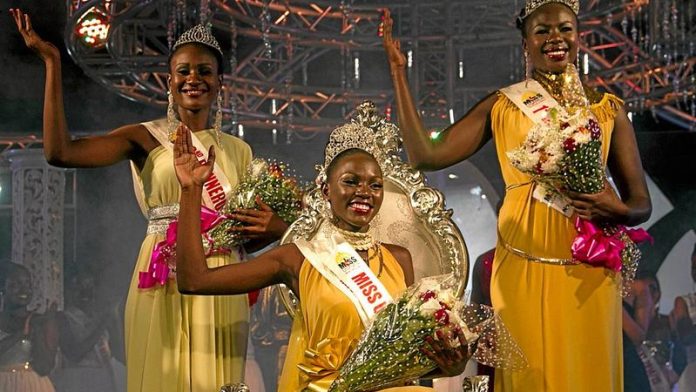 She could easily be the woman you sit next to on the early morning bus. Or an acquaintance you have just handed a business card to and will probably not remember the next time you meet. Leah Kalanguka, a Ugandan poultry farmer-turned-beauty queen, has that girl-next-door look – a look that has pushed social media networks into overdrive.

After she was crowned Miss Uganda last month, cyberspace was awash with unflattering pictures – harsh lights illuminating the sweaty and tired skin of a 23-year-old living a simulated life in high heels, with red lipstick staining her front teeth as she flashed a tired smile. Many commented on social media that she was ugly, much to the horror of her family.

“We were shocked at the reactions. We never saw Leah as ugly,” says sister Hannah Kalanguka. “She was always the most beautiful among us.”

Still, critics insisted, Kalanguka’s dark skin and “normal” looks did not meet their standard of what a Miss Uganda should look like. Then the comparisons started: pictures of European and Asian beauty queens were posted to remind Kalanguka of what she will be up against when she competes in the Miss World competition in December.

But her supporters were not easily dissuaded. “An African woman does not need to look like an Ethiopian or Rwandan to be called beautiful any more,” Viola Twikirize said on Facebook. “Why do people think that to be beautiful, you must try as much as possible to look like a muzungu [white person]?”

But the storm of criticism soon settled and fans and friends shared more flattering pictures of Kalanguka and sent messages of solidarity. They described her as “an African beauty”. After all, they said, other unconventional-looking women have gone on to wow the world.

After all, hasn’t the fierce beauty of South Sudanese model Alek Wek

Still, the prevailing perception is that the African idea of beauty has been influenced by Western culture – as evidenced by Africa’s high consumption of skin-lightening products and Brazilian hair weaves.

Sylvia Tamale, a women’s rights activist and law professor at Uganda’s Makerere University, agrees. “Beauty is definitely a social construct.  Given our colonial history, the current geopolitical racial hierarchies and the power of the information revolution, there is no doubt that the West plays a crucial role in dominant constructions of beauty globally and not just in Africa.”

Virginia-based sociology professor Mwizenge Tembo says that, even before colonialism, Africa considered lighter skin as being more beautiful – but for biological reasons. In Tembo’s 2010 paper exploring beauty in sub-Saharan Africa, in Zambian society, for instance, a girl with an orange-brown glow to her skin – often associated with fertility or pregnancy – is considered beautiful.

“In this indigenous environment, largely removed from modern Western characterisation, perception and the modern media, African sensibilities might find light women attractive not because of the Western racist ideology that white women are most superior but due more to a symbiosis between biological and cultural disposition,” he says.

Wek, in a March interview with The Guardian, said that, because she was raised in a society that was not exposed to Western media, she never for a moment considered herself ugly.

“Our confidence came from my mother,” she said. “She told us it was about celebrating the beauty of being a woman – that’s what made you gorgeous.”

Kalanguka says her strategy for shaking off the critics is being herself.

“Beauty comes from within,” she says. “All my life I have been told I am beautiful, and I believe it. That cannot change with a few internet photos.”

Minority races
But black African women still struggle to get noticed in a world where the princess is still largely blue-eyed, blonde and slim and the devil is still black, stocky and ugly.

The 2014 Hollywood Diversity Report, compiled by the Centre for African-American Studies at the University of California in Los Angeles, blames the way minority races view themselves on the “predominantly white media images they consume” – although in Africa, black people are hardly the minority race.

It says racial minorities remain excluded from major roles in the American entertainment industry: “This reality has meant limited access to employment for women and minorities and to a truncating of the domain of media images available for circulation in contemporary society.”

That notwithstanding, the success of Wek, Nyong’o and others gives the impression that the world is waking up to seeing black as beautiful.

Sceptics say their appeal is based on a kind of “exoticism”.

She decries Hollywood for exalting African beauty in “an exotic, noble, new-car-smelling way” and choosing to commodify the black African woman’s body.

representations of an enslaved black woman [in the movie 12 Years a Slave],” Halliburton writes. “Her character, Patsey, shows the reality of an enslaved body; this body is allowed to be ogled, worked to death, beaten and raped. This body does not belong to Patsey and, for some reason, it feels as though Nyong’o’s body doesn’t belong to her either.”

But beauty is also a fluid concept and a personal preference, says Tamale, adding that it would be simplistic to attribute African notions of beauty solely to Western influences.

“We cannot rule out individual preferences also colouring our notions of beauty,” Tamale explains. “I think dreadlocks are beautiful, but my mother finds them unattractive.”

She says the African perception of beauty is a hybrid of racial, cultural, political and aesthetic blocks and paradigms. But does it really matter?

“All this pressure to be beautiful and perfect is not healthy,” says Miss Uganda Foundation co-ordinator Janet Nalugya. “Winning the Miss World crown and being dubbed most beautiful is not everything. We shall be happy if Kalanguka returns home and promotes agriculture and inspires young people.”

The weekly pop sack: Good looks, messy looks and the looks of AKA

Queen of Katwe: Much bigger than one girl’s story

Beauty-benders take to the Net